Singapore General Election 2011: an alternative to the greed and arrogance of PAP 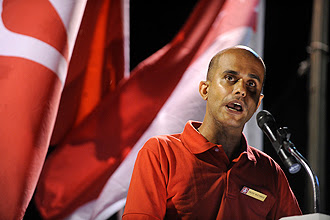 If one were to take a look at Dr Vincent Wijeysingha’s resume, it would be natural to assume that he would be precisely the type of candidate that the ruling PAP would want within its ranks.

The 40-year-old was educated in the United Kingdom and holds a doctorate in social policy. He is the Executive Director of local NGO, Transient Workers Count Too.

His father, Eugene Wijeysingha, is a former principal of elite Raffles Institution – the alma mater of several of the PAP’s top leaders, including former Prime Ministers Lee Kuan Yew and Goh Chok Tong.

Yet, Dr Wijeysingha will not be contesting in the white-and-white of the PAP in the coming elections. Instead, he will be wearing the red of the Singapore Democratic Party, considered to the most ‘radical’ opposition grouping within Singapore’s strait-jacketed political landscape.

The SDP is led by another academic, Dr Chee Soon Juan, who is best known for a firebrand style of politics that has caused him to be a lightning rod for attacks by the ruling PAP – some of which have seen him ordered to pay hundreds of thousands of dollars in libel damages and even imprisoned.


Not Quite So Radical

Dr Wijeysingha, who joined the SDP in 2010, readily admits that he initially had trouble explaining his decision.

“It’s not surprising in my family that people do social work and teaching, but when I got involved in formal politics, they were apprehensive,” he said.

“When I told them it was SDP, even more apprehensive,” he said, with a laugh.

But after explaining his views and including them in party activities, they are “gradually coming around,” he said.

Dr Wijeysingha feels that at the end of the day, politics and social work stem from the same basis of values – “that human beings are important and have the right to live a fulfilling and dignified life”.

The SDP, he says, is a “coherent” party, “constructive about programmes” and “compassionate to the less fortunate.” This view is in stark contrast to the picture that the state-controlled mainstream media paints of the SDP, often depicting it as being destructive, radical and out-of-touch with the grassroots, preferring instead to focus on abstract concepts such as human rights.

Dr Wijeysingha has been instrumental in formulating some of the SDP’s constructive proposals, such as the party’s Shadow Budget 2011 and the 10-point SDP Promise.


A Heart for the Needy

In recent years, the SDP has argued vociferously for legislation to protect the welfare of low-income workers, such as a zero-rate GST on basic necessities and the implementation of a minimum wage.

While the ruling PAP often argues that the needy in Singapore are well taken care of, Dr Wijeysingha says that this is a “false argument”. He cites bureaucracy as one of the main reasons for the difficulties that low-income families have in accessing funds.

Dr Wijeysingha believes that living in a HDB flat helps to give him an understanding of residents’ needs. “I am not trying to pretend that I am some kind of working-class hero. I’m not,” he admits. “But you get to learn about the problems associated with living in a HDB flat.”

Chief amongst these problems, he argues, is the fact that the cost of living has gone up so rapidly in recent years while wages have more or less remained stagnant – a trend that has also been observed by outgoing PAP Minister and former NTUC chief Lim Boon Heng.

Dr Wijeysingha believes the Government can alleviate this problem by removing the profit motive for public services such as housing, education and welfare.


Born and Bred in Holland-Bukit Timah


Dr Wijeysingha is expected to be fielded as an SDP candidate in Holland-Bukit Timah GRC, which is an area he has close ties to. In 1987, he spent almost all his weekends at Serene Centre because his then-girlfriend lived on Sixth Avenue. More recently, he lived in an HDB flat near Holland Village.

He also served his National Service at Mowbray Camp, which is on Ulu Pandan Road.

“I grew up in a similar socio-economic area, Seletar Hills,” he revealed. “So there is an affinity with the needs of that community.”

Dr Wijeysingha is expected to be part of an SDP team that could include fellow academics Dr James Gomez and Mr John Tan. The incumbent PAP team at Holland-Bukit Timah GRC is led by Dr Vivian Balakrishnan, who is Minister for Communities, Youth and Sports.

Dr Balakrishnan, who was a former national debater, recently rejected a challenge from the SDP to attend a live debate in the run-up to the election.

The author is a former government scholar who studied Politics, Philosophy and Economics (PPE) at Oxford University. He is now working in the private sector.
Posted by Helluo Librorum at 8:02 AM