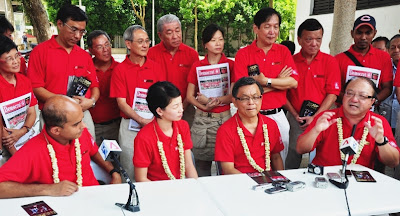 The SDP leader made the comment at a media conference to announce the SDP team for the Holland-Bukit Timah GRC which comprises of Dr Wijeysingha as leader, Dr Ang Yong Guan, Ms Michelle Lee, and Mr Tan Jee Say.

Dr Vincent Wijeysingha was responding to comments from PAP candidate Dr Vivian Balakrishnan about the SDP candidates being "strange bedfellows".

Dr Balakrishnan has been avoiding answering the SDP's calls for him to show the accounts for the Youth Olympic Games (YOG) which ran over by three times to nearly $400 million.

Not only has Dr Balakrishnan turned down the offer for a public debate but he has also avoided discussing issues that the voters are concerned with: Escalating cost of living, the influx of foreign workers and unaffordbale HDB prices.

Picking up on another issue of great concern was Ms Michelle Lee who spoke on the need for our education system to be improved. One way to do this was to reduce class size from the current 1 teacher to 40 students to 1 teacher to 20 students per class.

Herself a resident of the GRC, Ms Lee added that she and her SDP colleagues were not in politics for the money. "I repeat The SDP Promise that we will contribute 50 percent of our MP's allowance to improve the party's service to our constituents and to start an endowment fund for the needy."

Ms Lee graduated from the London School of Economics with a BSc degree (Honours) and worked in the Monetary Authority of Singapore and Soloman Smith Barney Citibank.

But Ms Lee preferred to work with people rather than money. She then joined the teaching profession, and also works with underprivileged children. The Singapore Democrats is immensely proud that she has donned our party colours and now stands as a candidate at the Holland-Bukit Timah GRC.

The third candidate was Dr Ang Yong Guan who continues to attract much attention with the residents. Many recognise the psychiatrist who regularly appears as a guest on Good Morning Singapore, a morning talkshow on MediaCorp's Channel 8.

Judging from the reaction of the crowd as well as comments on this website and elsewhere, Dr Ang is clearly loved and respected by the people who know him.

Hearing him speak, it is not hard to undertand why. Dr Ang is passionate about improving the quality of life of Singaporeans. He wants healthcare costs to be lowered and for medication to be affordable to ordinary folks.

Mr Tan Jee Say, our fourth candidate, was again the focus of attention. Trade and Indiustry Minister Lim Hng Kiang criticised Mr Tan's proposal that Singapore should graduate from an manufacturing-centred economy to a service-oriented.

"I never said that we should completely phase out manufacturing in Singapore." Mr Tan fired back. "I proposed in my paper that we should not continue to give incentives to bring in more manufacturers but rather to expand our services indusrty."

Dr Balakrishnan, unwilling to debate the real issues, made a bizarre statement that Mr Tan and his teammates made strange bedfellows. The PAP candidate said that his SDP counterpart had not exercised due diligence when he joined the party.

"I met my teammates weeks ago and had breakfast, lunch and dinner meetings with them," Mr Tan pointed out. "Everyone assessed everyone else and we feel very comfortable with each other."

Dr Balakrishnan is clearly clutching at straws and pulling up issues that are of little concern to Holland-Bukit Timah voters.

So why is he doing this? He knows what he is up against a formidable SDP team comprising of highly qualified professionals, a team that is competent, constructive and compassionate. He also knows that he cannot run on his record which has YOG written all over it and he cannot campaign on his party's policies which the people are very upset with.

He therefore has only one option: Distract the voters.

But in doing so, he is showing that he is rattled. The SDP's message to him is: Dr Balakrishnan, please don't panic.

Posted by Helluo Librorum at 6:16 AM