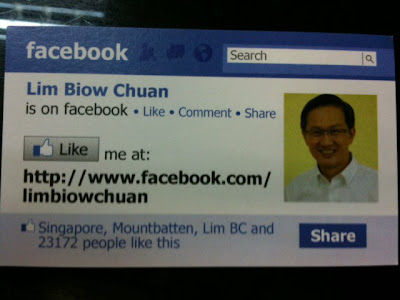 The Best Facebook Trick in Singapore General Election
by Willis Wee  (Article source:  here)
Thanks to Nicole Seah, I’m slowly getting into this whole Singapore Election thing. Now, more information from Online Citizen which shared about a “Facebook trick” by Mr. Lim Biow Chuan and his new media team.

As seen in the picture above, it says 23172 people like this. But as it turned out, Mr. Lim’s Facebook page only has about 250 likes at the point of writing. Some Facebook users felt cheated while some thought that it was pretty creative. Here’s an interesting dialogue I saw on Facebook to help you understand how 23172 was derived:


Facebook users: Err… how come the photo says 23172 “likes”, but there are only 153 “likes” here so far?
Mr. Lim: No worries. We have 23172 voters in Mountbatten (last audited figure) and my team envision to achieve this target. It’s a creative feature which they added and we are working as a team to achieve that. Good to point this out so that i can explain here.

(My comment: Lim Biow Chuan is a lawyer, and the vice-president of the Consumers Association of Singapore (Case), a consumers' rights group working against false advertising. Ironic, eh?)

No offense, but I think the information is indeed misleading. If Mr. Lin needed to explain things on Facebook, he and his media team might as well place a small note on the card to explain how 23172 was derived. A user wouldn’t click the like button because he would feel cheated as soon as he lands on the page. That’s my take. What’s yours? Would you like it? 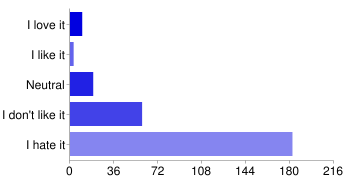 Posted by Helluo Librorum at 6:29 AM