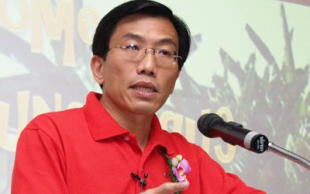 Dr Chee pointed out that the public image of the SDP is now different as how it was viewed in the past. (Yahoo! …

Singapore Democratic Party (SDP) secretary-general Chee Soon Juan says a rejuvenated SDP is emerging with a new public image as compared to in the past.

"I think you're seeing a very rejuvenated SDP emerging and as you can see from the candidates, the ideas are there, the platform is there and now we've got the candidates to back everything up, so we are very hopeful," he said.

Dr Chee also pointed out that the party's public image is now different as how it was viewed in the past as some would associate it with confrontational politics and civil disobedience.

He attributed this change in perspective to the rise in new media which allows the party to projects its true image. "Now with the internet, you're seeing a very different ball game and that is translating into a very different kind of situation for us in the SDP," he said.

The SDP chief was speaking at the unveiling of its second batch of five candidates at a press conference on Friday afternoon.

Isa and Sng have electoral experience under their belt, contesting in Sembawang GRC in the last election.

The party, who announced its first six candidates on Thursday, will be fielding a total of 11 candidates come May 7.

They will be contesting in Yuhua and Bukit Panjang single-member constituency (SMCs), and Holland-Bukit Timah and Sembawang group-representation constituencies (GRCs). 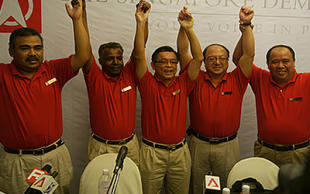 When asked about the party's slate of candidates for the coming election, Dr Chee said that they will be more than able to bring SDP forward.

"I think we are looking at a very exciting future for the party and we certainly will be pushing them forward and making sure that our party's objectives are achieved."

Among its newly-introduced candidates are two of the party's "prize-catch" -- Mr Tan and Dr Ang -- who were former senior government officials.

For Mr Tan, joining the opposition was not an easy choice. He was a former government scholar and official, and was often associated with members of the ruling People's Action Party (PAP).

He only decided to contest as a SDP candidate on Wednesday, revealing that he didn't discuss his decision with any of his family members except for his wife, who is very supportive of him contesting in the elections.

Apart from being the former principal private secretary to SM Goh from 1985 to 1990, he also revealed sharing cordial relationships with some of the ministers including Mr Mah Bow Tan and Mr George Yeo.

"It's not easy because to people it's like you are biting the hand that feeds the mouth.

"I came from a poor family and without a government scholarship I would never make it to university and much less to Oxford. I'm grateful to them," he said.

While he has a deep sense of gratitude towards the government and its leaders for allowing him to further his studies through a government scholarship, he stressed that "gratitude is not servitude".

"It is not blind loyalty; it does not mean giving up the sense of what is right and what is wrong, what is good and what is bad," said Mr Tan, adding that the government has lost both its way and moral compass.

Addressing the country's economic policies, he highlighted that one of the flaws lies in the country's emphasis on the manufacturing industry which has resulted on the dependence of foreign workers, leading to other problems.

"The emphasis on manufacturing as the prime mover of the economy has resulted in the dependence of workers, especially cheap workers and that has caused a lot of problems, depressing the wages and social problems."

Although he reiterated that the SDP is not against foreign workers, Mr Tan took issue with the number and speed of foreign workers coming into the country.

Mr Tan shared that while the SDP used to have a public image problem, there is no more of that.

"It has got a softer image to the credit of Dr Chee. He has changed, he has improved, he has learned his lessons and we are moving forward. But I'm sure it's all for the better of Singapore."

He also pointed out that Dr Chee "is not the kind of demon that he was made out to be".

"He (Dr Chee) is quite an amenable, flexible person and that shows in the organisation of the party, it is very well organised.

Dr Chee has been able to attract very passionate people to work for him and for no pay, no salary, no material gain but just a belief that they have to do something for the country," said Mr Tan.

First time candidate Dr Ang added that the public perception of the opposition as a whole is changing.

"I think it's changing now. It's a symbolic meaning that we are trying to create and hopefully remove the fear of getting involved in opposition politics so that more will come forward," he said.

"As I said, to join the opposition must be as easy as joining the PAP politics, then indeed we would have arrived."

Dr Ang, who has been involved in the grassroots for more than 15 years, also stressed that it is very difficult to initiate change from within the PAP because it is "overpowering and domineering".

This coming election will also see a number of former government scholars contesting under the opposition banner. They include husband and wife team Hazel Poa and Tony Tan from the National Solidarity Party (NSP), and Benjamin Pwee and Jimmy Lee of the Singapore People's Party (SPP) among others.

Mr Tan said that it is a "good sign" that former government scholars are coming out and taking their stand in politics, despite the risks that it carried especially by joining the opposition.

"It is good that these people come out. There is no conspiracy or plan to rise in the opposition to the government but they do give encouragement to others and I'm sure it rubs off subconsciously.

"There are enormous risks for anyone coming into opposition politics, we put risks to our career, family members and yet we are prepared to come out," he said.
Posted by Helluo Librorum at 4:00 PM