Over 15,000 people who turned up at the Workers' Party (WP) rally on Thursday night went home impressed after listening to Chen Show Mao's maiden speech.

Chen --  who is contesting in Aljunied group representation constituency (GRC) with WP chief Low Thia Khiang, party chairman Sylvia Lim, Pritam Singh and Faisal Abdul Manap -- received one of the loudest cheers from the teeming mass of people gathered at a field along Hougang Central when he was introduced on stage.

The WP "star catch" went on to give his self-introductions in Malay and Tamil, before delivering his speech in English and Mandarin.

Calling the crowd "brothers and sisters", he said that he was heeding the call from the nation's leaders to come home and serve the country and that "it is good to be back to home."

During the course of his English speech, he touched on how wages were not increasing as fast as the country's GDP growth, highlighting that most of the growth went to corporate profits and wage income for top earners.

While speaking in Mandarin, Chen asked voters to think about their vote, before asking them to think about how many more "five years" they have left in their lives to choose their government.

WP secretary-general Low, who has been Hougang's MP for the past 20 years, also got the crowd cheering when he referred to Law and Home Affairs Minister K. Shanmugam calling the WP "a co-driver", whom Low felt is essential especially when "the road is hard to navigate."

To everyone's delight, he said, "The co-driver is there to slap the driver when he drives off-course or when he falls asleep!"

After which he added, "But of course, if he drives responsibly, then just keep talking to him to keep him awake."

Yaw Shin Leong, who will be replacing Low in Hougang and will go against the People's Action Party's Desmond Choo, talked about "the Hougang spirit" among residents and asked why they were penalised for supporting the opposition.

He got the crowd cheering towards the end of his speech when he asked them, "Will you support us?"
Hougang resident Marx Seet, an auditor, was one of the many thousands who responded, "Die die support you!"

People Yahoo! Singapore spoke to felt that it was a good start to WP's campaign to win votes, especially with their 'A' team facing a tough battle ahead in Aljunied GRC. 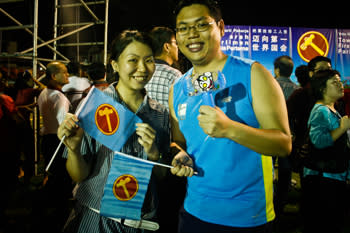 "It's the first time I've seen Singaporeans so passionate about something like this. But I do hope that crowds will translate into votes for them," said Kelvin Tey, 28.

Others felt that WP could do better for its rallies.

Said Deryck Chan, 25, "Some of the speakers could have done more to stir the crowds' emotions."

Second-time voter Juliana Yong added, "I'm here because I want to make an informed decision and get a clearer picture of who I want to vote for when I go to the polls."

"I came specially to hear his speech, I didn't even eat my dinner to come for this rally," she said, before screaming "Chen Show Mao, I love you!" when he was introduced on stage.
Posted by Helluo Librorum at 9:04 AM