I have no other agenda: Vincent Wijeysingha 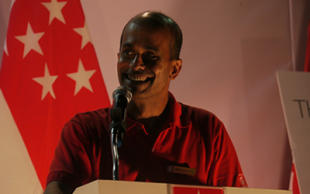 SDP candidate Vincent Wijeysingha said he has no other agenda other than to champion the concerns faced by Singaporeans. …

Speaking at the party's rally which saw over 5,000 people gather at an open field located near Commonwealth MRT station on Thursday evening, Dr Wijeysingha said, "Let me assure you all and Singapore from this place. I have no other agenda than your agenda. Why? Because I am one of you."

Citing issues such as rising costs of living and housing prices, Dr Wijeysingha, 40, claimed that he is able to relate with the common man on their grievances.

“I also feel the pinch of rising prices. I also have to think twice about going to the doctor when I have the flu. I also haven’t been able to afford a flat and I also worry about my parents old days,” he said.

“And if we have any radical idea, if we have any dangerous agenda, it is this, that all Singaporeans deserved to be happy and fulfilled, not just some.”

His statements were a tongue-in-cheek reference to the “gay” video issue raised by Dr Vivian Balakrishnan.

On Monday, the People's Action Party (PAP) Holland-Bukit Timah GRC team led by Minister for Community Development, Youth and Sports, Dr Vivian Balakrishnan, had questioned if the SDP and in particular Dr Wijeysingha, will pursue the "gay agenda" in the political arena.

This comes after a YouTube video showed the SDP candidate in a forum on how to further promote the rights of gays and lesbians.

However, SDP chief Chee Soon Juan later responded that neither the party nor its candidates will pursue such an agenda and both parties have since put the matter to rest.

Addressing the issue for the first time in public, Dr Wijeysingha who is also an executive director of a social welfare organisation says that he bears no hard feelings and would also like to put the matter behind him.

"Politics is a stressful activity, not for me. But having said that, politicians make mistakes, we are human beings, and we say the wrong things," he said.

"Dr Balakrishnan may have miscalculated, these things happen. I want to move on and I want to say from this place. I want to wish my PAP opponents the very best of luck and may the best men and women win."

Meanwhile, other issues raised at the rally included ministerial salaries, accountability for the "overblown" budget of the Youth Olympic Games (YOG) and the need for more public assistance.

Coming on as the second last speaker of the night, the loudest cheers were ultimately reserved for Dr Wijeysingha as the crowd chanted "we want Vincent".

When he asked why they attended the rally, the crowd replied, "To see you, Vincent", before they broke into laughter and cheers.

According to the SDP, local celebrities such as actor-director Lim Kay Siu, TV host Denise Keller and local playwright Alfian Sa'at were also spotted at the rally.

However, some people in the crowd were upset with the poor sound system which left many who were standing at the back trying to make out what the candidates were saying.

One of them was 48-year-old researcher James Raj, who complained that he could barely hear a thing from the back of the crowd.

"I was really looking forward to what Vincent was going to say but unfortunately I couldn't hear a thing. Perhaps they should add more speakers at the back of the field," he said.
Posted by Helluo Librorum at 9:15 AM