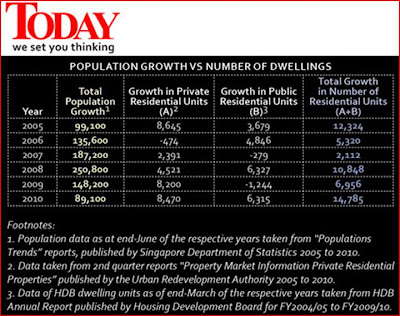 Dividing total population growth by residential unit growth (A+B) in the table (above), we get a ratio that is  the average number of new residents that must be housed in a new residential unit, if existing accommodation pattern (who live where) does not change in the course of a given year.

It indicates the scarcity of housing supply, relative to demand. The larger the number, the scarcer housing is.

Of course, that did not happen. Nevertheless, this ratio is a rough-and-ready indication of the housing supply and demand.

Except for 6.03 (in 2010), all the figures indicate an under supply of housing, and therefore a strong pressure for housing cost to rise. (On average, each household in Singapore has 3.5 persons [here]).

Both private and public residential supplies are closely monitored and managed by the government.

It must therefore be the PAP's policy to under-supply housing, relative to demand, to drive up housing costs.
Posted by Helluo Librorum at 1:23 PM