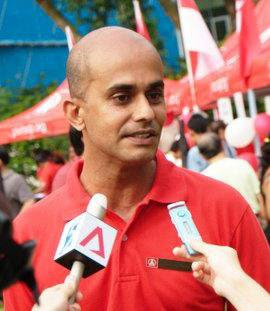 (Video of the speech: here)

The government of our choice

Why are you going to the polls on Saturday next?

Because the government of our country is our choice.

Not the choice of the PAP.

And don’t be fooled by these fears that the PAP has put into our hearts for 52 years.

That things will be bad.

My friends, things *are* bad.

The PAP pretends that everything is good.

The PAP pretends that the $800 you receive next week will pay for the entire GST that you will incur next year.

And my friends there is no doubt, there is absolutely no doubt, that the government will raise GST once again after the elections have finished. Just like they did after the 2006 election.

Getting our national priorities right

Yesterday, the Prime Minister raised the usual fears that the PAP throws at the people of Singapore. Your family is at stake. Your job is at stake. Your childrens’ future. Your parents’ care is at stake. If you vote for the opposing party, things will go bad. Well, I say again, things are already bad.

The prices of basic goods are so high and still rising. In the last week alone it went up by 0.5% again. On healthcare costs: Even if you have very, very good insurance, large MediSave reserves, a single catastrophic illness like renal failure can set you back in the hundreds of thousands of dollars. What more for those who haven’t earned enough to save for their old age?

Each time I look at a child I think to myself how important is her development. How important it is to let her learn and discover the world, to prepare herself for adult life.

An open message to opponents

My friends, at this stage, I would like to say something from my heart.

Some of you may have read in the headlines about me in the last few days. I’d like to say from this place that I have no anger towards those who caused me to enter the headlines.

Politics is a stressful activity. Not for me, but for other people.

People who haven’t had to contest their seats for the last 20 years.

But having said that, politicians make mistakes. We are human beings, we say the wrong things.

So Dr Vivian Balakrishnan may have miscalculated. These things happen.

I want us to move on and I want to say from this place. I want to wish my PAP opponents the very best of luck. And may the best men and women win.

I would also like to say something about my motivation for being in politics, and the motivations of the Singapore Democratic Party which I love. Our party’s aim, has always been the people of Singapore. Not so much for those who can speak their views, although them as well.

But we are moved and worried by those who can’t, or don’t. The elderly aunties and uncles. Our disabled brothers and sisters. Our children who are not doing well in schools or have gotten into trouble with the police. Our young couple who are struggling to set up a family and buy a flat. Our startup businessmen who are very good with business ideas but struggle with the cost of doing business in Singapore.

And the whole of our people who wonder Why the PAP are telling us things are good. That they know what they are doing. But why are we do we see more and more money being wasted, and we are asked to pay more in taxes, levies and subsidies.

This is our only aim: The people of Singapore.

This is the agenda of the SDP.

To help our fellow Singaporeans. To speak on their behalf. To ask the hard questions. To do the research.

And take us all into the future confidently, with no one left behind.

Let me assure you all and Singapore from this place:

I have no other agenda, than your agenda.

Because I am one of you.

I also feel the pinch of rising prices.

I also have to think twice about going to the doctor’s when I have the flu.

I also haven’t been able to afford a flat.

I also worry about my parents’ old age.

I have spent my whole professional life working with the underprivileged.

And it is they who move me.

And it is they who move the members of my party.

That ALL Singaporeans deserve to be happy and fulfilled – not just some.

That all Singaporeans deserve to be equal members of this nation – and not just economic digits, as the Minister Mentor once called us.

Because after 52 years of government, the PAP is still unable to secure your future.

How PAP regard Singaporeans

Mr Lee Kuan Yew says we need to be kicked to work harder. Mr Khaw tells us to send our elderly to old peoples’ homes in a foreign country. And Dr Balakrishnan refuses to increase support for the poorest of the poor, and then tells us to mind our own business when he overspends in the hundreds of millions of dollars.

What we have seen over these last 5 years, they have never asked us ’bout what we thought about the policies.

Did they prepare us so that we can be welcoming of these new migrants in our midst?

Did they prepare the country so that there will be community centres and social services, enough school places and flats and hospital beds to prepare for the increase in population?

Did they ask us for our advice on how our new migrants could blend into our community, so they could become loyal Singaporeans like you and me?

And did they ask us whether we expected our new citizens to serve in the army like all of us who have?

They have stopped asking us what we wanted. And they have steamrolled through policies, and we are now struggling.

The true cause of our nation’s problems

And let us not make a mistake about the causes of these problems. Let us not forget that it is this government that have caused these problems not through one term in parliament, or two. But thirteen – over fifty two years.

That’s two generations of people. There are more people in this country today, who are not born when the PAP came to power. And it is those people whose lives are worse off now than they were then.

You know on the first page of the PAP manifesto Prime Minister Lee Hsien Loong says that they were not able to predict the global crisis in ‘08. That is not true. There were several economists and thinkers and scholars who predicted that.In 2005, no one listened.

In fact in those few years, the Singapore government lost huge amounts of our investment money. And what did they do in the Holland-Bukit Panjang Town Council? They took $8 million dollars of your money and squandered it on toxic investments.

We knew at the end of ‘07 that Lehman brothers was already in very choppy waters. But greed became more important than safeguarding your money. Mr. Goh Chok Tong says: “It’s only two percent.”

Let me say to him from this place, wherever he is in Marine Parade today, that that was two percent of your money, the conservancy charges that people have to struggle to pay on a monthly basis. They took it. They invested it. And they lost it.

They gambled with our money.

This is a government that after 52 years, that is not able to manage, not able to give you the right you deserve.

Where is all the expertise they say they have? Not after 5 years, but after 52 years.

(indistinct) Mr Mah Bow Tan said that if we ran housing services as a non-profit affair we would be stealing/raiding from the reserves. Is Mr Mah saying that banking in huge amounts of money is more important than sheltering our families and our own people? If he does let him come out and say it over these next few days.

But might I remind him, that he was utterly silent when his colleague Dr Balakrishnan gambled away hundreds and millions of dollars, and refused to explain, and continues to refuse us a debate on these and other policy matters.

That man is the leader of a team you may well have as your representative, come May the 7th.

A man totally incapable of either managing his portfolio, or justifying his policies like a man.

My friends, voters of Holland-Bukit Timah, voters of Sembawang, Yuhua, voters of Bukit Panjang. Next Saturday you exercise a choice. A choice I remind you that people have died to secure for us.

A choice between arrogance and service.

A choice between gambling and prudence.

A choice between self-service and community service.

I invite you to listen to what both ourselves and the other party’s saying.

Take a look at our website and our Facebook page.Support us in any way you can, and on that day, put your family first, as the Prime Minister says, put your home first, and send these eleven people into Parliament.

Thank you.
Posted by Helluo Librorum at 4:43 PM