Vivian slithers in the gutter, SDP on knife-edge, part 2 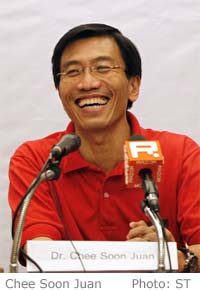 The first point I wish to make is this: The fact that we’re having this huge controversy is testimony to Chee Soon Juan, his leadership skills, and the hard work and dedication of the core group that stayed with him through the leanest years.

The party has grown. It has become a force in new media. Over the years more and more people have joined, some quite prominent.  As discussed in part 1, the SDP’s sudden growth spurt seem to have “rattled” (to use SDP election candidate Vincent Wijeysingha’s word) Vivian Balakrishnan and his PAP team in Holland-Bukit Timah group representation constituency.


The SDP’s most recent coup was to bring in Tan Jee Say and Ang Yong Guan, two men who have spent the greater part of their careers as part of the establishment. That they would consider and eventually decide to join the Singapore Democratic Party (SDP) led by Chee should tell you that thinking people do not consider Chee and the SDP a bunch of lunatics, despite huge efforts by the government and the People’s Action Party (PAP) to cast them as such.

But it’s not because Chee or the party has changed. It’s the skewed public perception of the SDP that has been corrected through the use of the internet. As Chee said to the Straits Times,


Asked by reporters later about the party’s public image issues, Dr Chee said: ‘I think that is a perception. The media has gone out of its way to trash what I have said and who I am.
‘When (people) see something directly by looking at our website, they see something very different. And they think, oh, something has changed. But it hasn’t changed. It is the perception,’ he said. ‘So I am very glad that there is this new media tool where you can reach the public directly, and we are going to use it as we go on.’
– Straits Times, 23 April 2011, Has the SDP changed?

For a party that has long advocated that Singaporeans are ready to be a mature, democratic society, the SDP should not fear small-mindedness out there. I think the surest way to distinguish the party from the PAP is to be the exact opposite of Vivian Balakrishnan’s record. I think the party will be surprised how understanding people can be about sexuality, about life’s learning journeys and about the need to bridge differences.
Posted by Helluo Librorum at 9:42 AM