J B Jeyaretnam was the target of a vicious PAP smear campaign in 1997, with DPMs Lee Hsien Loong and Tony Tan playing key roles 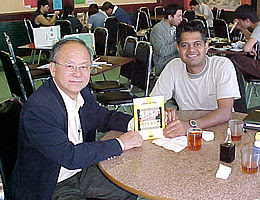 The year was 1997. Prime Minister Goh Chok Tong, having been dealt a black eye by the voters at his first general election six years ago, was eager to prevent any further losses of seats. Things were looking up for him, as the main opposition party – the Singapore Democratic Party – had apparently imploded, with its founder and icon Chiam See Tong having been ousted from the party following a series of internal disagreements. The new party leader, Dr Chee Soon Juan, had done himself no favours with an ill-conceived hunger strike to protest his sacking from the National University of Singapore.

However, the Workers’ Party apparently had other ideas. Led by the rambunctious and indefatigable J B Jeyaretnam – who became the first man to defeat the PAP since Singapore’s independence at the Anson by-election of 1981 – the WP was gunning for a Group Representation Constituency. Mr Jeyaretnam’s team for Cheng San GRC included prominent Chinese grassroots leader and lawyer Tang Liang Hong (邓亮洪). They were up against the incumbent PAP team, led by Education Minister Lee Yock Suan, and a close contest was expected. After all, this election would mark Mr Jeyaretnam’s return to politics after a decade-long absence – twice elected as MP for Anson, he was expelled from Parliament in 1986 following a conviction which he claimed was politically motivated. 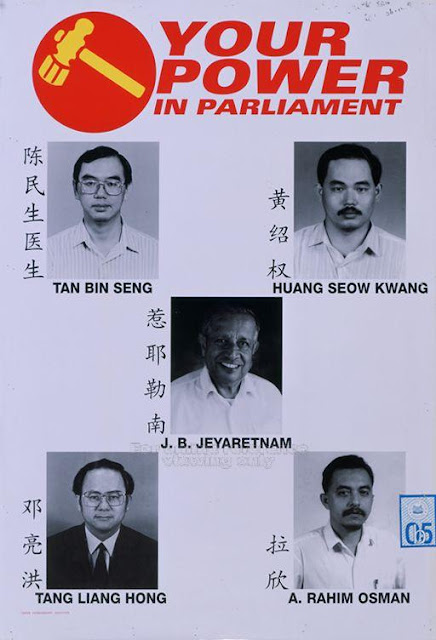 Mr Goh and his cadre of PAP leaders – including Senior Minister Lee Kuan Yew, whose disdain for Mr Jeyaretnam was by now well-known – were dreading the thought of having five additional MPs from the WP. A decision was made in Cabinet to keep the WP candidates out of Parliament.

They pored through Mr Tang’s past speeches and singled out one that he had made way back in 1994 at a National Day celebration dinner. In the speech, Mr Tang said that he would like to see more members from the “silent majority of Chinese-educated” Singaporean stepping forward and playing a more active role in society. The then-Minister for the Environment, Teo Chee Hean, was present at the event – and he later informed his Cabinet colleagues that Mr Tang had “worked people up” over issues of language and religion, and that it was his duty to “expose” such “dangerous” people.

One by one, senior PAP leaders came out to lambast Mr Tang, claiming that he was an anti-Christian, anti-English educated Chinese chauvinist during the heat of a hotly-contested election campaign. The mainstream media was used to cast repeated attacks on Mr Tang’s character, with Senior Minister Lee leading the chorus by saying that saying that “if he’s (Tang’s) against the English-educated, he must be against the Malay-educated even more. If he is against Christianity, he must be against Islam even more because Islam represents even a deeper exclusiveness. So this approach must be destructive.”

Mr Tang responded by claiming that the remarks from the PAP leaders were lies. Immediately, he was sued for defamation by some 13 PAP MPs. Amongst them was the then Deputy Prime Minister, Dr Tony Tan Keng Yam.

Together with Deputy Prime Minister Lee Hsien Loong, Dr Tan and Prime Minister Goh led the charge in Cheng San, making it a “personal” battleground and claiming that a vote for the WP team was a vote against them. Of course, none of them were actually candidates in that particular constituency; they all all enjoyed walkovers in their respective wards.


Tang Liang Hong was bankrupted and had his property seized following the 1997 election. He entered into self-imposed exile in Australia.Angered by their tactics of heavy bombardment, Mr Tang lodged a police report, accusing the PAP leaders of criminal defamation.

Mr Jeyaretnam was handed a copy of the report during an election rally midway through his speech, and he announced to the 80,000 strong crowd that he had in his hands a police report made by Tang against “you know, Mr Goh Chok Tong and his people”.

Those fateful words would later become the basis for a flurry of lawsuits by the same PAP leaders against Mr Jeyaretnam, alleging that he had, by conveying the news to the crowd, implied via innuendo that the PAP MPs were all guilty of criminal acts and were therefore unfit for office. Having already sued Mr Tang for a total of $8,075,000, the PAP leaders were still baying for Mr Jeyaretnam’s blood, even though he had done nothing more than convey a simple fact to the audience.

A Mareva Injunction was soon granted against Mr Tang, freezing all of his assets including his property in Bukit Timah and all his bank accounts – as well as those of his wife. Fearing the worst, he left into self-imposed exile in Australia. He has not returned to Singapore since.

Mr Jeyaretnam was returned to Parliament as a Non-Constituency MP. He was made a bankrupt in 2001 after being unable to pay the more than $600,000 in libel damages awarded to the PAP leaders. As a result, he lost his seat in Parliament. To make a living, the former judge and senior lawyer was reduced to hawking his self-published books on the streets. He was discharged from his bankruptcy in 2008 and founded the Reform Party soon after, but died before he could make a final push to win back his Parliamentary seat.

What is the point of bringing up all this now?

The two Deputy Prime Ministers who were so instrumental to the battle for Cheng San and the subsequent moves to demolish Mr Tang and Mr Jeyaretnam are back in the public eye.

Dr Tony Tan Keng Yam is the odds-on favourite to be elected the next President of Singapore. 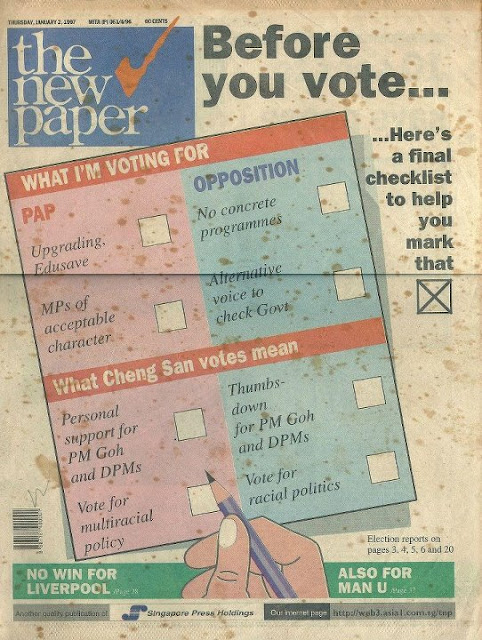 
Both men have re-invented themselves as politicians with a “softer” touch. Prime Minister Lee made an unprecedented apology for the failings of his administration during the general election campaign in May this year. He urged civil servants and MPs to remember that they were “servants, not masters” of the people. He said that the PAP needed to transform itself and become a more compassionate party, distancing himself from the hardline approach used under his father and then Mr Goh.

However, that still could not prevent the WP from fulfilling Mr Jeyaretnam’s unfinished dream of winning a GRC. The party won six seats in the election, deposing two cabinet ministers in the process. In addition, they won another two NCMP seats, giving them their strongest Parliamentary presence in history.

As for Dr Tan, he adopted a lower profile following the events of 1997, going on to serve another ten years as Deputy Prime Minister before retiring from politics in 2006.

He went on to become Chairman of the government-owned Singapore Press Holdings – a position reserved for PAP stalwarts and loyalists – as well as Deputy Chairman and Executive Director of the Government Investment Corporation (GIC), serving under Lee Kuan Yew.

Yesterday, he resigned from these two positions and re-emerged to announce his candidacy for the office of President – the highest office in the country. He is currently regarded as a gentlemanly, dignified politician, and the outgoing President has given a ringing endorsement of his “qualities to lead the country”.

Lee Hsien Loong and Tony Tan were key players in what was possibly the PAP’s darkest hour. Cheng San, and the events that followed it, represented a highly-calibrated operation to smear, discredit and demolish the PAP’s most vocal dissidents and to intimidate the voters into rejecting an alternative voice.

Not long after, both Mr Lee and Dr Tan were plaintiffs in an expertly-cheoreographed series of lawsuits designed to stifle and bankrupt their two antagonists. The case was roundly criticised by international lawyers and jurists as an abuse of the legal process, and not long after, Queen’s Counsel were barred from appearing in Singapore courts.

With Mr Lee and Dr Tan holding the two highest offices in the land, all power and authority – both legal and moral – will be vested in their hands. Though it may appear as though the leadership of Singapore has gone through a “sea change” following the watershed 2011 general election, in reality, little will have changed if Dr Tan is elected.

What about the possibility that Dr Tan may have mellowed and softened his stance? At yesterday’s press conference to announce his candidacy, he appeared to have no regrets at all about the lawsuits which he initiated, justifying them on the basis that “everyone should have the right to clear his name” after being slandered.

Though it is not likely that Dr Tan – or any other senior political figure – would want to attempt similar actions in today’s political climate, it is notable that he was a key figure behind PAP smear campaigns in the past.

Whether or not this damages his moral authority is up to the voters to decide, but seeing as the mainstream media is likely to whitewash the truth, it is important that those who are too young to remember the events of 1997 are made aware of his past track record – especially since it is a track record that he continues to stand by, up until today.

The author is a contributor who enjoys discussing politics and history with his friends at the kopitiam and office canteen. He was a resident of Cheng San GRC during the 1997 General Election and describes himself as a “hardcore” Workers’ Party supporter. He moved to Hougang in 2003.

For background,  reports, and analysis of the Tang Liang Hong incident:

Posted by Helluo Librorum at 11:39 AM

Do you know the real reason why the PAP made Tang Liang Hong out to be a "Anti English, Anti Christian" Chauvinist?

The background is that in 1997, the main 'incentive' that the PAP had at the time was "Estate Upgrading", ie, if you vote for us, your block will get lifts on every level, sheltered walkways, etc.

However, for Cheng San GRC, the demographic profile was different from the usual GRCs. A significant chunk of it was the Seletar Hills estate - a private estate that didn't really care for HDB flat-type lift upgrading or sheltered walkways.

In fact, the Seletarians were really pissed at the govt for tearing down their only market/hawker centre for miles - the Seletar Market.

So, the ground was really sour for the PAP.

These private estate owners were largely Christian/Catholic and English educated. Hence, the clever strategy of painting TLH as 'Anti-Christian' and 'Anti English educated'.

I'm still pissed that they took our Cheng San away and cowardly hid us under AMK GRC. New generation of voters don't know this ugly past, and the older generation seems to have forgotten about it.

Now you know why AGC is headed by Lucien Wong