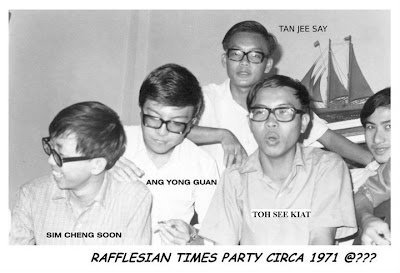 TOC managed to sit down with Mr Tan Jee Say and Dr Ang Yong Guan for dinner on the same day they were announced as candidates of the Singapore Democratic Party (SDP). In an exclusive interview over Hainanese chicken chop at Mooi Chin at the Landmark Village Hotel, the latest additions to the SDP’s team speak to TOC about their friendship that’s spanned 40 years, the level of support they’ve seen since taking the plunge into politics, and some of the causes they’d fight for if they were in Parliament.

How long have you and Dr Ang known each other?

TJS: We’ve been close friends for 40 years, I was one year Yong Guan’s senior as the Managing Editor of the school newspaper in Raffles.

It was quite a distinguished publication: Walter Woon took over from Yong Guan, and the person who handed the paper over to me was Han Fook Kwang (Editor of the Straits Times). We bonded over rushing deadlines and getting stories to press, and eventually we got to know each other very well, even our families. That made it easier when I had to speak to Yong Guan’s family about him joining politics.

When did you start thinking about running for elections?

TJS: Well it all started with the paper I wrote and presented at the TOC forum. I was encouraged by the response to my paper, a lot of people wrote in to me, strangers, old friends, primary school classmates I haven’t known for a long time. Many of them asked me to fight for my ideas to be realized.

My wife was the one who encouraged me to write the paper in the first place, she said to write my ideas down as a book or a report. So I burnt the midnight oil and finally it came about. I called up Sze Hian and said I’m not sure if they’re going to publish my paper or not, and it was nearing the Budget. Yong Guan’s family was a bit more resistant.

AYG: It’s a sad thing, because if you join the PAP you won’t have these issues. I think that in itself reflects poorly on the state of the nation. If you have an interest in politics you have to go in, but in Singapore it’s so difficult.  My wife, my children, my parents: all were dead set against it. Jee Say had to talk to them.

When they finally came around, they became very supportive and even came to the press conference today.

TJS: I know them very well.

AYG: Well If I don’t go in this round the next time I’ll be 61 years old. My running mate (Jee Say) might already be an MP the next time round, and I thought since Jee Say is someone I know so well and feel so comfortable with, why not.

I want to be part of that critical mass, that wave. If you noticed the scholars who started joining the opposition, it’s almost like a few waves. First Tony and Hazel, then Ben and Jimmy, so I thought, it’s now or never.

TJS: Well, after the forum I realized that it wouldn’t achieve my purpose to come out alone, I must organize a group to come out. To make an impact you need numbers. And you need to start thinking about an alternative government to implement the policies. To do that you need the numbers. I thought of starting a non-aligned national resource pool to distribute candidates to different parties but eventually decided to try something more direct.

The first person I approached was Yong Guan, who was reluctant but he eventually came around.

Eventually, Dr Wong Wee Nam introduced us to Dr Chee, who had heard about my paper and wanted to talk to me about the ideas inside. After meeting up I realized he was quite a good man, very passionate and the SDP was the only party which offered a comprehensive economic plan for Singapore.

You’ve held pretty senior positions in the civil service, what was the reaction like from members of the establishment when they found out you joined?

AYG: Well before we joined we met up with two retired MPs, one of whom was an ex teacher of ours. The teacher ex-MP didn’t know, but the other one knew and was very supportive, gave us encouragement.

Well I guess the question on everyone’s mind is: why the SDP?

TJS: The SDP’s the only party with a comprehensive economic policy, a dedicated and excited base, and excellent communications policy that’s passionate and committed.

The only thing that worried me before I got to know Dr Chee was the negative public image. But I asked around and I was surprised that even a senior PAP grassroots leader told me that Dr Chee has been demonized by the PAP and the media.

So I met him, and he’s a very nice man, he’s not the demon he’s made out to be. So the positives were there and the negatives were overplayed, the rest naturally fell into place.

I think they welcome us because we add some credibility to the party which has taken an undeserved beating from the public demonization. We hope we can bring the SDP to the next level.

How will the PAP react?

I don’t know. This morning I wrote them an email to PM, SM Goh, Tharman, George Yeo, Lim Hng Kiang telling them, “I wish I’d told you about my entry into politics earlier but I’ve been overtaken by events, but my decision does not detract from the strong sense of respect I have for you as friends and former colleagues.  I still treasure our personal friendships and my actions during the campaign will reflect this.”

Dr Ang, you were a grassroots leader with the PAP for a very long time, why don’t you think you can change things from the inside?

AYG: In the intermediate levels you can still make a change, but at the policy level it’s very difficult.

For example the government policies are failing at a very systemic level: the low fertility rate is very disturbing. Although standards of living are higher, fertility rate is dropping. The stress levels in Singapore just aren’t conducive to starting families.

The funniest thing is I’ve seen many families where the couple goes to Australia for a few months and then conceive!

Spontaneity, creativity has been stifled. It’s a sense of helplessness in the citizenry that makes people very selfish and result orientated where the end point becomes more important than the process.

For example, a principle will tell a child to get her depression treated first before taking a major exam, and take some time off school. This is done purportedly in the interest of the child but from my interactions with them I realize that it’s because of concern over the school’s result. There’s a lot of cynicism.

I spent 15 years serving as a grassroots leader in Kembangan with George Yeo, no one can say I don’t know.

How do you sense the PAP is feeling right now?

TJS: There’s an uneasiness. I don’t know if its dissatisfaction, but they’re definitely very nervous. They know they’ve run out of ideas. For instance, Ong Ye Kung’s introduction as a candidate was very disappointing: he said he used to be against casinos but now he’s for it.

AYG: Which illustrates the saying the ends justify the means: that’s wrong. You bring in the jobs but what kind of jobs are they?

TJS: Well in 1984 when I was working in Ministry I went through the whole selection process. I went right to the final session by LKY [Lee Kuan Yew] and Rajaratnam, I remember Raja grilled me very rigorously. You know, the last round is the full Cabinet, it’s not really exactly a tea session, it’s quite rigorous.

Awhile after that Goh Keng Swee called me at the office and asked me when I’m resigning to start my entry into politics. I was quite surprised because I hadn’t heard back from the party yet. Not long after I was told by my Minister then, Tony Tan, that they wanted me to establish my career first as I was too young.

I was 30 years old that year, two years younger than Lee Hsien Loong. That was his first round running.

I knew Goh Keng Swee because I worked with him for a special project where he was advising the President of Sri Lanka. He was appointed a special economic advisor to the President sometime in the early 1980s and he needed someone to work with him on the project to help him with the research for it. He picked me, and so I ended up seeing him quite regularly for that project, several times a week.

Do you think the fear of a change in government will work against the opposition?

TJS: I don’t think people should be frightened, it’s a reality of the future of politics. The realities of today are too complex to be represented by a one or two party state. Coalition governments are a possibility, that’s the way the UK’s gone.

In reality, and I’m sure Jee Say can tell you, it’s actually the perm sec who runs the ministry. So whichever government is in power, the civil service is supposed to be apolitical and make sure the country continues to run by cooperating with the government of the day.

You know MM says that Ministerial pay is the reason why the PAP has managed to field good candidates in the last few elections, but this one we’ve proven him wrong.

All these Cambridge and Oxford people who don’t need to be paid millions to contest. A few nights ago Chiam See Tong said “politics is in my blood”! Now that’s pure passion, that’s something money can’t buy.

How do you rate your chances?