Time for Commission of Inquiry on Alleged Marxist Conspiracy: an online petition by Singaporeans 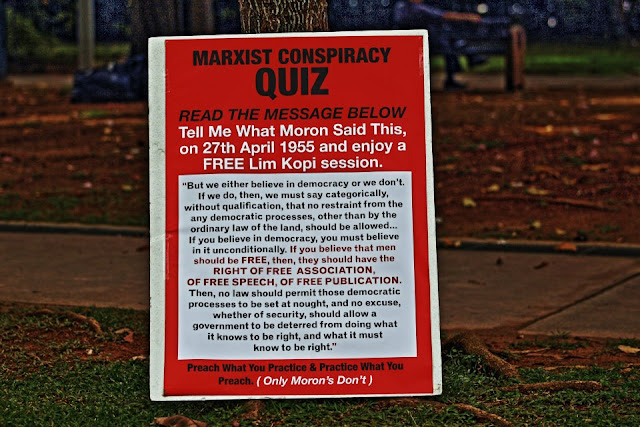 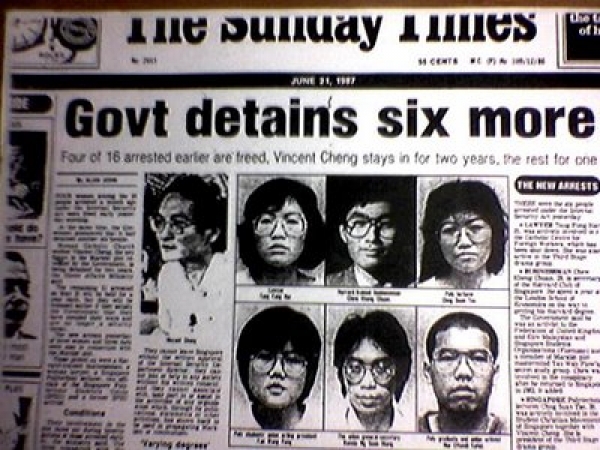 It has been 25 years since Operation Spectrum, when 22 persons were detained for allegedly being “Marxist Conspirators”. Even then, there were doubts about the accusations and whether these citizens should be detained without trial. 25 years later, doubts continue to linger, and the calls for a review of this dark episode in Singapore’s history continue to grow louder.

MARUAH as a human rights group calls for an independent Commission of Inquiry to be established, to review the detentions of these alleged “Marxist Conspirators” in 1987. We ask for this for the following reasons:-


1. Existence and Nature of the Alleged Threat

The Government has tried to show that there was a security risk. But they have done so almost exclusively through statements and press releases, with little more being shared. The scant evidence presented in newspapers included limited clippings of letters [1], guilt by association [2], and the circumstantial evidence of some members having contact with Tamil extremists.[3] The paucity of information continues to raise questions about the Government’s case.

More disturbingly, even the political leaders of the day themselves seem to have expressed doubts over the years. No less than the then-Prime Minister Lee Kuan Yew himself had described the alleged “Marxist Conspirators” as “do-gooders”.[4] Then-Deputy Prime Minister Goh Chok Tong had revealed that former National Development Minister S.Dhanabalan left the Cabinet in 1992, due to his discomfort over the detentions.[5] Most recently, Deputy Prime Minister Tharman Shanmugaratnam had stated: “although I had no access to state intelligence, from what I knew of them, most were social activists but not out to subvert the system”.[6]

There is also growing literature from the detainees themselves, to date unrebutted by the Government, which provides important insights into their actions and their motivations. It seems that more than anything else, the detainees had been driven by their naivete and social consciousness to help fellow human beings in need – and nothing more. There are also analytical and introspective articles written by academics and the Catholic Church that raise many questions about the validity of the detentions of these 22 individuals.

Despite all these questions being asked, the evidence to support the allegations of a “Marxist Conspiracy” and of a threat to national security, and to justify the detentions themselves, continues to be unavailable. This failure to respond to the growing body of work rebutting the Government’s version of events is unsatisfactory and unacceptable.

The contradictions from the political leaders themselves, coupled with the detainees’ own accounts which conflict with the official version of events and the absolute lack of transparency, make a compelling case for an independent Commission of Inquiry into this matter to address this wound in the national psyche once and for all, so that the nation can truly begin to heal and put this traumatic event in our history behind us.

2. Treatment of the Detainees

The government has denied any mistreatment of the detainees. However, there have been persistent accounts by detainees of sleep deprivation, physical assaults, lengthy interrogations [7] in very cold conditions and limited access to family and lawyers, all unchallenged by the Government.

Even if detention without trial can be justified, detainees must still be treated lawfully and in accordance with universal human rights norms. The continued failure to account for the allegations of mistreatment remains troubling. This is an area that requires accountability and appropriate compensation to detainees if the allegations are proven to be true.

MARUAH calls for an independent Commission for Inquiry to be established to review all aspects of Operation Spectrum, including the nature of the allegations against the 22 detainees and the supporting evidence, so that Singapore can truly begin the process of healing.

We the undersigned agree with and support the call made for an independent Commission of Inquiry to be established to review all aspects of Operation Spectrum, including the nature of the allegations against the 22 detainees and the supporting evidence.

[4] Mr Lee made this statement in court documents filed in the case of Lee Kuan Yew v. Derek Davies [1990].

[6] Hong Lysa, Huang Jianli, The scripting of a national history: Singapore and its past (Hong Kong: Hong Kong University Press, 2008), 145.

The ISA is an impediment to building an inclusive society, Ravi Philemon (here)
Posted by Helluo Librorum at 5:51 AM