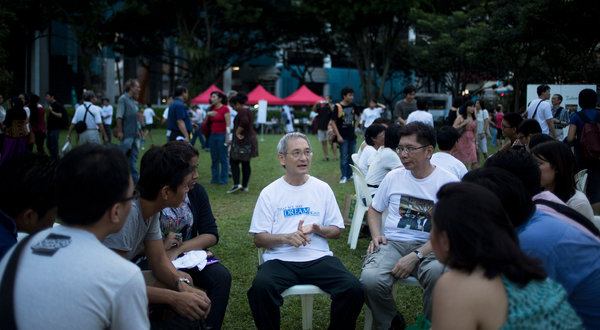 Vincent Cheng, center, talked at an event in Hong Lim Park about his detention
in the ’80s during a crackdown against activists

SINGAPORE — Those accustomed to thinking of this booming city-state as a bastion of apolitical strivers and shopaholics might be stunned by the burst of civic activism sweeping this crowded flyspeck of an island.

On a recent weekend, hundreds clamored in a downtown park for a repeal of the country’s draconian antisubversion law, while a dozen urbane Singaporeans made a quiet stand by photographing the banyan trees and historic tombstones that the government plans to bury under a highway. Across the city, gay-rights campaigners were finalizing plans for a rally that is expected to draw thousands.

While no one is predicting a new era of noisy, public agitation or the imminent end of Singapore’s single-party rule, social activists and political analysts point to the increasing number of people who are shedding a long nurtured reluctance to challenge the nation’s paternalistic leaders and their “autocratic light” style of governance.

“People are beginning to feel a bit more at ease, and the government is also loosening up,” said Vincent Cheng, 65, a former Roman Catholic social worker who was tortured and imprisoned for three years in the late 1980s after the government accused him of helping orchestrate a Marxist conspiracy.

The change is evident in a variety of forums. After a welcoming speech to college students late last month, Deputy Prime Minister Teo Chee Hean found himself dodging pointed questions about Singapore’s news media restrictions and its hamstrung democracy. Those in attendance said that Mr. Teo was taken aback by the boldness of the crowd, which in years past would have quietly absorbed his pep talk about hard work and self-sacrifice.

Not surprisingly, social media have helped propel the newfound audacity. Facebook and a number of homegrown Web sites are giving voice to the sort of government criticism and no-holds-barred debate that almost never appear in the straitjacketed mainstream news media. The country’s leaders, eager to lure foreign talent and investment by softening Singapore’s reputation as a gum-banning, rules-obsessed nation, have given wide berth to the online free-for-all.

Many of the most vocal activists are young, wired and cynical about the government’s argument that it alone can maintain the prosperity and social harmony that has transformed this resource-starved island into one of the most advanced economies.

“In the past we used to only talk quietly in coffee shops,” said Cheong Yaoming, 29, executive editor of The Online Citizen, an influential source for local news and acerbic commentary. “But now people are more willing to speak out in public.”

Activists say the changes took root in the late 1990s, but the local resurgence really began to shift last year, after the ruling People’s Action Party lost six seats in the 87-member Parliament. Although the party has dominated electoral politics since 1959 — Prime Minister Lee Hsien Loong is the son of Lee Kuan Yew, Singapore’s founding father — its popular support during the election last May dropped to a historic low, with just 60 percent of the vote supporting the party’s candidates, down more than 6 percentage points from the previous election.

Terence Chong, a senior fellow at the Institute of Southeast Asian Studies here, said the results prompted Singapore’s leaders to reconsider their institutional animosity toward grass-roots activism. “Since the general elections, the government has been feeling its way,” he said. “They want to be seen as engaging civil society groups, but they also fear being seen as weak and bowing to public pressure.”

The wary dance between the government and civic activists has been on full display at Bukit Brown, a sprawling public cemetery that would be bisected by the highway, and later sprinkled with new housing.

Having persuaded the government last year to convert an abandoned rail line into a 25-mile-long “green corridor,” preservation groups and environmentalists argue that Bukit Brown — once the final resting place for Singapore’s most illustrious citizens and one of the last of the island’s traditional burial grounds — should be preserved as a nature reserve where people can connect to the past. They have organized petition drives and walking tours that have so far drawn more than 3,000 people.

On a recent Sunday, Beng Tang, 40, a schoolteacher, joined one of the tours with his parents, who were looking for a relative’s grave but also reveling in the overgrown vegetation and bird life that has flourished since burials ended in the early 1970s. Gesturing to his parents, Mr. Tang said that the older generation of Singaporeans was reluctant to stand up to the government but that he and his peers were increasingly willing to lobby for things they hold dear.

“If we make enough noise, maybe the government will change its mind,” he said.

Gay-rights advocates are embracing a bolder approach in their battle against discrimination, which they say is abetted by a law that bans sexual activity between men — even if it is seldom enforced. On June 30, they expect thousands to show up in Hong Lim Park for an event billed as Pink Dot.

Participants are being encouraged to wear pink and converge at dusk to form a large fuchsia human circle that will be illuminated from above. The first Pink Dot event in 2009 drew more than 1,000 people; last year attendance surpassed 10,000.

In a sign of lingering skittishness, organizers have been careful not to call the event a protest. They have also urged foreigners to respect a law that bars nonresidents from participating in rallies in a section of the park, known as Speaker’s Corner, which is the only legal spot for free-speech activities.

For many, the June 2 rally in Hong Lim Park that called for a repeal of the antisubversion law was a landmark event. It was timed to coincide with the 25th anniversary of Operation Spectrum, a crackdown on activists that led to the arrest of 22 people. The detainees included student leaders, lawyers and teachers who were bundled away during nighttime raids and forced, during what they say were harsh interrogations, to confess to an antigovernment plot.

Over the years, legal advocates say more than 2,600 people have been swept up by the law, the Internal Security Act, which allows the authorities to imprison suspects without trial.

A spokesman for the Ministry of Home Affairs declined a request for an interview. Instead he referred to recent statements defending the law as a necessary weapon against security threats. The ministry, in a statement, also rejected calls for an inquiry into the detentions of the late-1980s, which it said were justified at the time. “While it seems distant now, the Communist threat to Singapore was a real and serious one,” the statement said. “Without the resolute steps taken then by the government, the outcome for Singapore would have been drastically different.”

Constance Singam, 75, a veteran activist and a former president of Singapore’s largest women’s organization, said Operation Spectrum left deep scars on society that have yet to heal. “It cast such a large shadow that people here still feel constrained about speaking up,” she said.

As Ms. Singam spoke, a guitar duo sang Pete Seeger anthems and students wearing foam Statue of Liberty crowns wandered through a series of ersatz jail cells that sought to depict the indignities of Operation Spectrum. At a nearby table, volunteers sold newly published books about the detentions, including a memoir by Teo Soh Lung, who was a successful lawyer when she was arrested in the spring of 1987.

Ms. Teo, 65, says she wrote her memoir, “Beyond the Blue Gate,” soon after she emerged from two years of prison, but did not dare to publish it until last year. She said that she remained nervous about attending the event. “This is the first time the ex-detainees have gathered together in public,” she said, warily looking over her shoulder. “This is progress.”

Posted by Helluo Librorum at 12:03 PM