A new chapter for the SDP 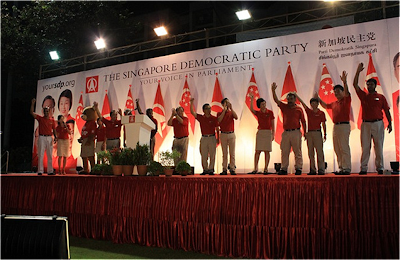 The Singapore Democratic Party (SDP) may do better than what the Workers’ Party (WP) have done come the next General Election.

The WP’s victory in Aljunied GRC is based on several factors, of course. These include its consistent grassroots work, trustworthy brand names of Low Thia Khiang, Sylvia Lim and the party itself, and a slate of credible candidates.

The SDP’s team in Holland-Bukit Timah GRC has almost all of these attributes but in smaller measure. The brand name of the SDP has changed somewhat. The demonization campaign by the People’s Action party (PAP) government and the state-controlled media of SDP secretary general Dr Chee Soon Juan will take time for the party to overcome. The good news is that it is not an impossible task, as this election has shown.

Dr Chee’s video where he spoke in Hokkien, for example, has been warmly received by those who have seen it, and by some who were previously skeptical of him.

The SDP’s use of the Internet and social media tools has helped raised its profile and more importantly present a side of the party which attracted approval and support. The scorecard of its Holland-Bukit Timah team is nothing to snigger at. 40 per cent is an achievement, given the short campaign period. 36 per cent in Sembawang GRC too is a good result.

As the SDP itself has acknowledged, it needs to work the ground more consistently and reach out to the heartlanders in the next five years. In this, it should learn from the WP. Nothing beats that personal touch – shaking a voter’s hand, looking people in the eye, and lending an ear to residents’ grievances.

One big advantage the SDP has over the other political parties is its ability to harness the potential of New Media and social media. Its embrace and use of Facebook, Twitter, Youtube, and its ability to produce quality videos, have allowed it to reach potential voters and disseminate its message. The other parties have either fumbled, such as the PAP, or do not feel that New Media is as important as real grassroots work, such as the WP.

Going forward, however, and as this election has shown, cyberspace is the new grassroots. There is no doubt about this. Knocking on doors in the heartlands is still important but so is engagement online. Social media and the introduction of mobile Internet connections have shown that human communications is forever changed. What is online no longer stays online, and the SDP seems to understand this better than the other parties. Indeed, because of its relentless use of such tools, the SDP has gone some way in addressing what it deems its misrepresented public image.

While the PAP and the WP may be steps ahead of the SDP as far as brand names and outreach are concerned, the SDP will be able to catch up and close the gap substantially by the next election if it is able to supplement its online expertise with consistent face to face engagement in the heartlands.

The party has been able to attract intelligent members, such as Mr Tan Jee Say and Ms Michelle Lee, and inspirational candidates such as Dr Vincent Wijeysingha and Mr Ang Yong Guan; it also has the ability to put together some rather compelling policy proposals as well.

Politics is a long-term endeavour and success comes in incremental steps, especially for opposition politics in Singapore. So, while some may feel disappointed that the SDP did not win any seats this time round, and it has not done so since 1991, there is no need to despair.

In fact, the SDP has taken a huge leap in being seen as a credible party, compared to past campaigns where it was assailed with accusations and lawsuits by the ruling party. In the 2011 campaign, the party was disciplined, stuck to its game plan, and, more importantly, surprised many with its rational and focused approach. Its courage in speaking up firmly against some government policies has also struck a chord with some.

Many of the younger generation have come to know the SDP for the first time and like what they see. They are not hampered by the perceptions their parents may have of the SDP. It is this generation which the SDP has its biggest support, one would suspect. By the next election, this number would grow with the addition of a new group of young first-time voters which is more attuned to what is online.

The SDP now needs to work on the older generation which is less likely to prefer online engagement. So, the party will need to go the old fashioned way and hit the coffeeshops and markets regularly.

If the SDP continues its work – both in cyberspace and on the ground – the next five years, the party could reap substantial rewards, perhaps even surpassing what the WP has achieved in 2011.

So, SDP supporters and members should not despair. Indeed, 2011 could be just the curtain raiser – a new chapter for the SDP could have just begun, and it is looking encouraging.
Posted by Helluo Librorum at 3:28 PM