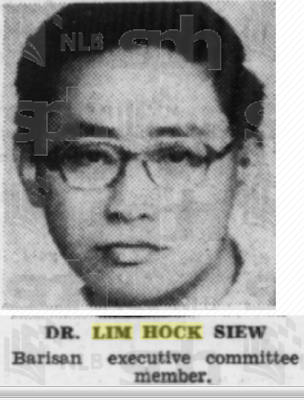 Like many, I learnt with great sadness of Dr Lim Hock Siew’s death. It is especially painful for me since I have only met him once, and so briefly on 11 February 2012. Dr Lim came to the memorial mass of my husband, Francis Khoo, when I brought his ashes back home to Singapore after 35 years of exile. It was a great honour to meet him. For many of us he is a hero of legendary status.

I was too young to remember properly the mass arrest of 1963, the Operation Cold Store that incarcerated dozens of brave men and women who participated in the democratic struggle for Singapore’s independence.

All I can recall was asking my mother about the many passport pictures published on the front page of the Chinese newspaper, Sin Chew Jit Poh. I asked her who those people were and why were their pictures lined up on the front page. They were arrested for political reasons was her answer. At that time it sent a shiver down my spine when I thought of that front page with rows of pictures of people detained. Years later, I was able to form my own understanding of what that meant.

That front page news had become a recurrent theme for the next 24 years of Singapore political news. There were many more newspaper front pages with passport photos of others arrested in the seventies. Then in1977 it was to include friends of my husband Francis Khoo. In the eighties yet others were detained - this time my own friends.

As I grew up, I made my way to study medicine in the University of Singapore. The name Dr Lim Hock Siew surfaced. This time it was in connection with Dr Beatrice Chen, the prominent and much admired renal physician, who taught us medicine. In the middle of her lecture my more politically conscious classmate whispered in my ear - “Dr Chen is the wife of Dr Lim Hock Siew, the famous founder of PAP and the Barisan Sosialis (Socialist Front) who was detained without trial because he would not kowtow to the Government.” “Oh - he must be a very brave man!” “Yes, he and his friends are all arrested and put in prison because they opposed the government."

With this distracting conversation, I could not concentrate on Dr Chen’s lecture. That rows and columns of photographs on the front page newspaper of 1963 came back, and I wondered if Dr Lim was one of them. If so he would have been detained without trial for nearly a decade. Dr Chen came across as being extremely beautiful and dignified. My friend continued, “She is in quite a lot of trouble with the University for standing up for him and supporting him." “So, she has got guts too,” I replied.

I grew up in PAP-controlled Singapore, qualified as a doctor in 1973 and obtained my Master of Science in Occupational Medicine in 1976 in this prosperous and successful island. While I pledged loyalty daily at flag-raising ceremonies, cheered at national day parades, convinced that everything the Government did was good and right, I occasionally remembered those photographs on the front page of 1963, and Dr Beatrice Chen and her husband, Dr Lim Hock Siew.

Yet it was not possible to learn much about Dr Lim if you were growing up in the mainstream of Singapore. For a start there are no official documents about him. He was detained without trial, so I do not even know what his crimes were supposed to be. He was accused of various things, but never given the chance to agree or disagree with the accusations.

But things fell into place a bit at a time when another mass arrest came in 1977. This time my husband and many of his friends were on the wanted list and, indeed, Francis was the only one who managed to escape. When I was arrested a month later, I was able to verify for myself the reality of detention without trial, and being stripped of all rights and freedom in Whitley Road Detention Centre.

Unlike Dr Lim Hock Siew who refused to make any false confessions or betray his friends, I buckled under pressure and signed more than a dozen pages of “gobble-di-gook” and promised to lure Francis back to surrender himself to the secret police. I just wanted out of detention and was prepared to acquiesce.

As I was leaving the detention centre, I just thought of Dr Lim and his friends who had been in prison since 1963, and never faltered. I felt ashamed of myself for being such a weakling. I have much to learn.

By God’s grace, I was given a second chance. This time I made a stand and instead of pressurising Francis to return to Singapore to surrender himself, I chose to stand by him in exile.

While in exile I met with many friends of Dr Lim Hock Siew, and was able to learn about him from them. I respect those friends of Dr Lim. They told me about the early fight for Singapore’s independence and the struggle against British rule. They also told me about Dr Lim. He was a leader and they respect him. From them I learnt about the days they were together building up the trade unions and the civil structures in the early fifties and sixties. I learnt that Dr Lim was a strong and principled man. He was also a great leader who led by example and humility. When it came to taking a stand he did so readily and with great generosity. Because he never betrayed his principles, and spent 19 years in prison. He stood on moral high ground until his death.

My 35 years in exile, and Dr Lim’s long years in prison followed by ill-health after his release, meant that I never had a chance to get to know him personally. My husband wrote songs about him, made me watch his speeches on the internet. The most recent speech I watched on Youtube was just last year. He spoke with clarity, conviction and principles despite his age, his poor health and his long years in prison. We were so grateful that we can watch and hear him speak, and we understood why his friends and comrades respect and love him so much. That commitment to the Singapore people and his honesty, and his steadfastness will continue to inspire all of us. We are grateful that Singapore has political giants like him. We will honour his memory with our continued commitment to justice and freedom.

Dr Ang Swee Chai, a prominent surgeon and author of From Beirut to Jerusalem. She was one of at least 28 people, mostly professionals, who were arrested and labelled as Euro Communists and detained without trial under the ISA by the PAP government in 1977.

Dr Ang is the wife of the late Francis Khoo, a Singaporean lawyer exiled in UK for his political beliefs. She wrote this tribute to Dr Lim Hock Siew on 6 June


Posted by Helluo Librorum at 1:46 PM