The Ghost of Operation Spectrum Lives On: an essay by Jolovan Wham

The ‘Marxist Conspiracy’ and Me: The Ghost of Operation Spectrum Lives On


In 2003, I was a third-year social work student at the National University of Singapore. A friend forwarded me an email from The Working Committee II (the precursor of Transient Workers Count Too), a coalition of individuals who were promoting the rights of migrant domestic workers. In that email the Catholic Church’s Commission for the Pastoral Care of Migrants and Itinerant People was looking for volunteers for its Hope Haven Help Desk. The role of the volunteer was to talk to Filipina domestic workers in distress. I signed up immediately.

I had always been sympathetic to the exploitation of domestic workers because I grew up with them. As a child, I was alarmed at agents and employers who were verbally abusive, refused to grant days off, and had the right to dismiss them at short notice even when the dismissals were unfair. I decided to attend a presentation given by the Chairperson of the Commission, Mrs. Bridget Lew (now President of HOME), to find out more. Even though there were no more than 5 people in the room that day, what she said blew my mind. She spoke with passion and conviction of the grave injustice and abuse many of these women faced. I was deeply moved; it was a moment of inspiration and I made a resolution that I would do something to assist the Catholic Church in this mission.

I was not, and still not, a Christian. In fact, I am not a religious or spiritual person. But in Bridget, I saw someone who translated the teachings of Christ into an actionable programme for human rights and social justice. When I told a friend of my intention, he warned me that the people - many of whom were Christian - who were detained in Operation Spectrum had been doing exactly what I was planning to do: assisting migrant workers and speaking for their rights and their dignity. I had heard of Operation Spectrum and the so-called Marxist conspiracy. However, this was the period when social media was not as developed as it is now and information about this shameful episode in our history was scant. I reasoned to myself that Lee Kuan Yew’s reign in Singapore was drawing to its end and it was highly unlikely that this could happen again.

Even though I am not in Whitley Road Detention Centre today, the legacy of Operation Spectrum lives and continues to instill fear among activists and social workers through other forms of government harassment. In 2008, the Ministry of Manpower found it fit to summon us to a meeting because I had said to The Straits Times that ‘Singapore’s labour laws offer little real protection to foreign workers.’ My comment elicited a strong response from the Ministry the next day. See : http://www.asiaone.com/News/the%2BStraits%2BTimes/Story/A1Story20090120-115808.html

Complaints have also been made about me when I urged 1000 of my Facebook friends to email the then Minister of Manpower, Gan Kim Yong, to do something about the slum-like living conditions of foreign workers. This was after my friends, Stephanie Chok and Patrick Chng, had taken a clip provided by one of the construction workers I was assisting, and turned it into an awareness-raising video. http://theonlinecitizen.com/2009/09/toc-special-feature-is-singapore-really-slum-free/
Another meeting was called by the Ministry and this time I was accused of instigating people to write to the Minister. The Minister’s email address is out there on the internet for all to see.

Last year, after I wrote a piece for The Online Citizen criticising the government’s poor handling of the repatriation company issue http://theonlinecitizen.com/2011/11/repartriation-companies-manpower-ministers-response-belittles-the-efforts-of-migrant-workers/, another complaint was made and we had to appease the ministry yet again. Complaints have even been made of me critiquing MOM’s policies on their Facebook wall, even though the government is itself using social media to engage people and encourage ‘active citizenry’.

In 2007, when UN Women, HOME and TWC2 launched the Day Off Campaign and wanted to start a petition to gain support for a legislated weekly day off for migrant domestic workers, MOM summoned all three organisations to a meeting. They met us separately: HOME in the morning, TWC2 and UN Women in the afternoon and evening. We faced a firing squad of more than 10 civil servants grilling us on our motivations to launch the campaign, and discouraging us from doing so. They objected to the use of the word ‘slavery’ in our campaign poster along the Northeast Line (which mysteriously disappeared from public view after the meeting). They were concerned that our campaign would cause ‘social instability.’ Teacher friends also informed us that circulars were sent out to schools instructing them to avoid engaging us.

In 2009, I was also accused of 'instigating' Chinese construction workers to gather outside MOM because their employer was not paying their salaries and the workers found the intervention by the Ministry unsatisfactory. Once again, a meeting was called to discuss the issue and for the ministry to express its 'concerns'. See here: http://littlepeoplepress.blogspot.sg/2009/01/china.html

Last year, the Singapore Association of Social Workers retracted the Outstanding Social Worker Award from me one week after they informed me and my nominators that I would be its recipient. Two reliable sources told me that the award was retracted because of state intervention and political interference. See here: http://publichouse.sg/categories/community/item/243-sasw-owes-public-an-explanation-on-award-fiasco

What has all this to do with the Internal Security Act?

Two days ago I was informed that a large and influential Multinational Corporation was unhappy that I might be speaking at Saturday’s commemoration of Operation Spectrum, That We May Dream Again, co-organised by Function 8 and Maruah. I was urged not to participate because I should not be associated with 'Marxists' and our work with migrant workers might suffer.

The knock on the door in the middle of the night that took the 22 into detention is no longer heard. But it has been replaced by veiled threats, warnings and funding cuts. The government appears to have found proxies to do its censorship and its oppression. This is Singapore’s twenty-first century version of the ISA. It is scary. And it makes people who work for social change nervous.

The legacy of 1987 will continue to oppress us if we do not speak out and take action for the change we want to see. I am optimistic that it will come but we can only do it when we are united and work in solidarity with one another.

'Dignity Walk' My first major project with the Catholics Church's Commission for the Pastoral Care of Migrants and Itinerant People, May 2004

Andrew Loh It is never easy to speak up, despite what others might think. It is thus with great admiration that I applaud you, Jolovan, and others who continue to do so, in spite of all that you face (as you mentioned in the note).

We need leading lights for the movement for change - and you are one of these lights. 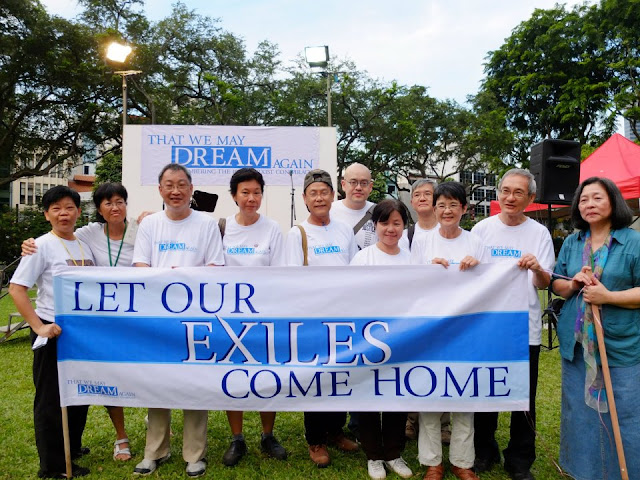 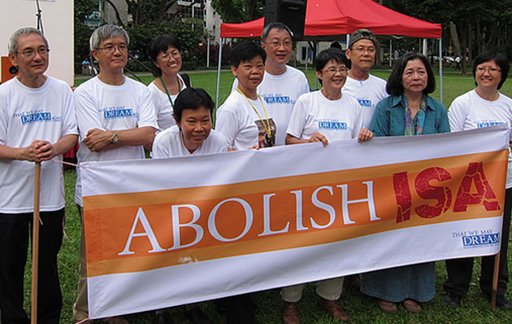 More than 400 people gathered at Hong Lim Park's Speakers' Corner on Saturday to commemorate the 25th anniversary of the first arrests and detentions in Singapore of alleged Marxist conspirators.

Human rights non-governmental organisation MARUAH and Function 8, a citizen-led move to facilitate civic discussions, remembered those who had been arrested in "Operation Spectrum" between 1987 and 1988 for their alleged involvement in a "Marxist conspiracy" to topple the government.

The two groups also called for the abolition of the Internal Security Act (ISA), under which such detentions without trial have been made.

Playwright Alfian Sa'at and Singapore Democratic Party treasurer Vincent Wijeysingha, among others, aired their personal views on why they believe ISA is no longer applicable today.

"I think today's turnout was really invigorating, because I think hopefully people in Singapore are getting concerned on a lot of issues that matter to them, and are willing to stand and and speak up for these issues… I think we will have a better civil society who will engage the government on issues that will matter to them," said MARUAH president Braema Mathi.

Present as well were eight ex-detainees of 1987, who shared their experiences with members of the public in a breakout session after the event. The 24 who had been detained under the ISA were a mix of social workers, church workers and professionals.

Teo Soh Lung, one of the 24 who had been detained, said, "I'm actually happy with the turnout and the weather. The turnout is beyond my expectations. I think the young people is the most important in the crowd. The younger ones may not know (about what happened).

William Yap, the only former detainee to have spoken on stage, said, "There were so many people who wanted the speak. All the ex-detainees were prepared to speak, but we thought we should give our guests precedence. Since there was nobody going to speak in Mandarin, they asked me and I said okay… I got some feedback and people were quite happy with the speech."

The event also featured exhibits of the detention cells and interogation rooms, which were set up in two weeks by the ex-detainees themselves, with the help of some of their friends.

The organisers also urged the public to support the call for the abolition of the ISA by signing a petition.

"This is a very difficult issue to come and talk about the ISA and 'Operation Spectrum', and yet there are number of people who are willing to support their names with IC numbers. I'm very proud of Singaporeans," said Braema.

The MARUAH president added that their organisation, together with Function 8, intend to take 2012 to raise awareness of this issue and plan for more activities.

Hundreds turn up at rally against arbitrary detention, by Yawning Bread  (here)

Posted by Helluo Librorum at 12:05 PM