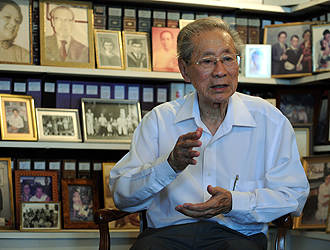 Dr Lim Hock Siew was my hero since I was a child. His name and the names of his comrades always got mentioned whenever my sisters and brothers discussed about the future of our country.

It was the tumultuous days of the great anti-colonial era of the 1950s and 1960s. We followed the speeches and movements of our heroes closely, looking for directions of what to do and how we could play a part. Our family lived in Queen Street opposite the old St Anthony's Boys School where I studied, and close to Catholic High School. At the other end of Queen Street was the Green Bus depot where there was a little newsstand. Every Saturday evening, my brothers and I would pick up a fresh copy of 阵綫報 hot from the press. It was also from there that I would get my copy of the Plebeian, the English newsletter of the Barisan Sosialis. Whenever I read the Plebeian, I felt as though Dr Lim Hock Siew and his English-educated comrades such as Dr Poh Soo Kai, Said Zahari, Woodhull and others, were talking to me from their prison cells. They kept my interest in politics alive even though they were locked away. So it was quite natural for me to choose to study Philosophy, Politics and Economics when I was offered a scholarship to study at Oxford University. It was a choice that did not go down well with the Public Service Commission at that time. I remembered being told to choose to study economics with engineering science or not given a scholarship at all. But I persisted and succeeded in persuading the PSC to let me study PPE. And I thank Dr Lim Hock Siew and his comrades for inspiring me and cultivating in me from a very young age, a lifelong interest in politics and the affairs of the country.


His influence and the influence of his comrades did not stop with me. After I graduated and returned home for my interview with the PSC, the late chairman Mr Tan Teck Chwee asked me if I would recommend PPE to future scholars and how schools should prepare them for the course since the emphasis had always been on science and engineering subjects for PSC scholars. I said yes without hesitation and that schools should start special classes to prepare our students for the unfamiliar subject of PPE. I was glad to know that a few years later, the PROMSHO programme was born at Hwa Chong Junior College. PROMSHO stands for Pre-university Overseas Merit Scholarships for Humanities at Oxbridge. In the past, the study of politics was to be avoided like the plague but today PPE is the subject of choice of many Singaporeans including PSC scholars. Many PPE graduates are now occupying key leadership positions in the Singapore government, banks, industry and the professions. They are making important contributions to the country and Dr Lim Hock Siew and his comrades can feel proud of their indirect influence in inspiring and nurturing this pool of future leaders.

The influence and ideas of Dr Lim Hock Siew followed me to the UK. I participated actively in student politics. I attended the meetings of FUEMSSO, the Federation of UK and Eire Malaysian and Singapore Student Organisations. I remember distinctly the 1975 annual conference of FUEMSSO at Sheffield University where tape recordings of the speeches of Drs Lim Hock Siew and Poh Soo Kai were played out and wow they surely captivated the audience. Many of us made speeches in support of them and their struggles for Singapore. It spoke volumes of their influence on us and the support they have amongst students thousands of miles away from home.


In the class of Nelson Mandala

I did not get to meet Dr Lim Hock Siew in person until much later in life. One day last year I received a text message from Ms Teo Soh Lung who said Dr Lim would like to meet up with me. I had just declared my intention to contest the 2011 Presidential election. I said yes without hesitation and was looking forward to meeting a great hero of my life. Unfortunately he fell ill and I did not get to meet him until the occasion of the SDP National Day dinner on 6 August 2011 where he was given an award for his lifelong contribution to the country. (The photo [below] in an earlier posting on this FB immediately before this posting shows Dr Lim Hock Siew with Dr Ang Yong Guan and myself at the dinner.) I was so glad to see him and his wife there and walked up to introduce myself and shake their hands. We chatted and I told him how much I admired him since my childhood days. I was also impressed by his absolute lack of bitterness against those who took away the best years of his life from him and his family. This made him truly great and undoubtedly places him in the unique class of heroes like Nelson Mandela. Yes I was delighted to have photographs taken together with him and his wife. They are now a treasure in my album collection. 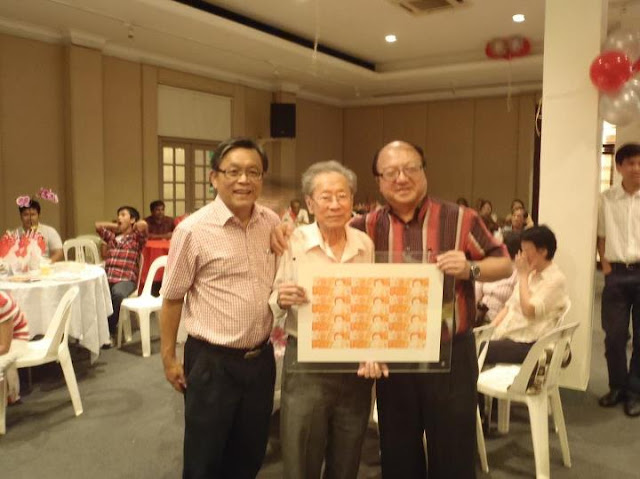 
I subsequently met him again at the Dr Ang Swee Chai lecture when I spotted him and sat down next to him throughout the lecture. It was always a pleasure and delight to have a conversation with Dr Lim but unfortunately there were not many opportunities to do so. But his ideas and influence live on in the many friends that I met with him and through him. In the last few days of his wake, I got to meet his family and his brothers and sisters who told me they were classmates of my two sisters Ling Chew and Ling Cheng at Chung Cheng High School and were active in student politics together. They also told me that Dr Lim Hock Siew was my great supporter for the presidential election and was active in sending out text messages to his friends urging them to vote for me. I am greatly encouraged and heartened by this tribute from my hero for which I am eternally grateful and will forever remember it in my heart.


Ideas ahead of his time

Dr Lim Hock Siew is not a man of the past. His ideas of fairness and equality are as relevant today as they were more than 50 years ago when he started to espouse them. More and more Singaporeans including many in the establishment are now openly expressing ideas on tackling extreme income inequality in our midst. In this respect, Dr Lim Hock Siew was ahead of his time with his ideas of socialism. He had the foresight to see far ahead of his political opponents. His untimely passing amidst the resurrection of the national debate on ideas of economic inequality that were so close to his heart, is a great loss to us who treasure his thoughts and humility. But he can rest assured that his struggles would not be in vain but would continue in the many young people that he had influenced and inspired. We will carry the torch and will surely succeed one day and make Dr Lim Hock Siew very proud. May you finally rest in peace, Dr Lim Hock Siew.