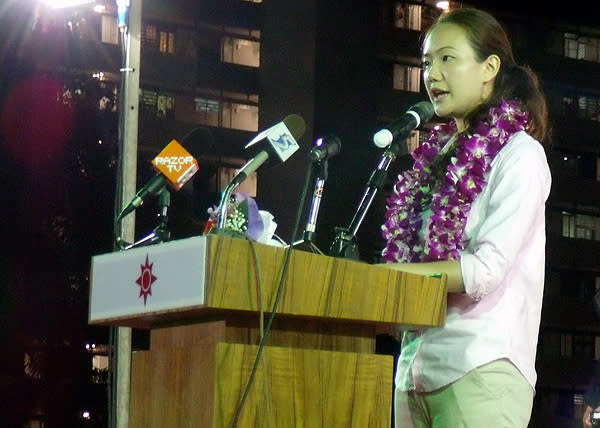 National Solidarity Party (NSP) candidate Nicole Seah delivered a surprise apology to the Singapore Muslim community when she apologised for the comments made by Minister Mentor (MM) Lee Kuan Yew in his book, Hard Truths to Keep Singapore Going.

In her rally speech to an estimated crowd of 15,000 at Mountbatten on Monday evening, the 24-year-old said, "On behalf of the Chinese Singaporeans, I would like to apologise to the Muslim community for the comments that MM Lee made."

In his recently published book, MM Lee suggested that Singaporean Muslims should be less strict in their Islamic observances in order to integrate better into the society. However, he later issued a statement and said that he stands corrected on how well-integrated Malay-Muslims are in Singapore.

Seah, who is part of the NSP team contesting in Marine Parade GRC, also addressed the crowd in Bahasa Melayu, touching on the concerns of the Malays.

"I would like you to know that my hopes are for us to progress as one Singaporean regardless of race or religion. I would like to build a community where no one gets left behind."

Seah's words had one of her Facebook followers, Alfian Sa'at, posting a thank you note on her page.

He wrote: "As Malay voter, I wanted to thank you for apologising for MM's remarks although it's not something you have to do. I keep telling my Malay friends that throughout Parliamentary history, the ones who really spoke up for the Malay minority were opposition MPs such as Chiam See Tong."

Seah also touched on the general anger at foreigners in Singapore, saying it may have been  "misdirected".

She said that the influx of foreigners should not be blamed for Singaporeans' stagnant wages, packed MRT trains and ballooning housing prices.

"No my friends, the real target of our anger is the PAP government," she said, to a thunderous round of applause. Seah criticised the government's policies for allowing foreigners into Singapore which led to a variety of problems.

The advertising executive also shared the policies she champion when elected. She intends to review industries on a case-by-case basis and will continue to allow work permits for foreigners in industries that are unpopular among Singaporeans. She also plans to review the foreign worker levy to encourage businesses to hire Singaporeans.

On a lighter note in her speech, Seah joked that supporters in orange were forbidden from using the toilets at the nearby Mountbatten Community Club. Taking a jibe at the People's Action Party, she said, "I wonder if it was a PAP rally, would they have let us in."

However, there was some drama near the rally when a car with an NSP flag was found vandalised with white paint. Photos of the car has gone viral, with netizens speculating that the culprit could have been supporters from the "other" party. 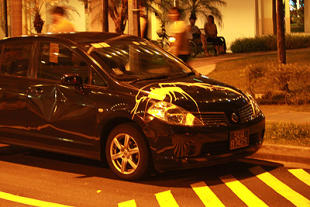 Posted by Helluo Librorum at 6:35 AM