Best and worst moments of the GE campaign 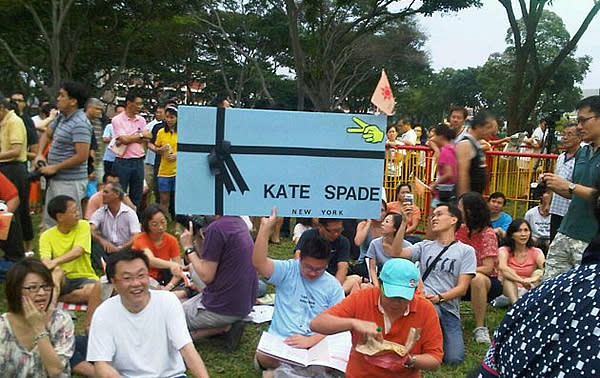 This photo was one of the funnier sides of the GE hustings period. (Yahoo! photo)
by Fann Sim (source)
As the hustings draw to a close, we round up some of the best moments of what has been an eventful campaign period. This list is strictly tongue-in-cheek and subjective. Enjoy.
Best Quote -- PM Lee
Prime Minister Lee Hsien Loong surprised many when the 59-year-old started his first-ever Facebook chat session with the opening words, "Hi, I'm Lee Hsien Loong. Welcome to my webchat! This is my first time doing this. Please don't flame me, I'm a newbie. :-)"
5,000 comments and one hour later, he left many impressed with his honest attempt at connecting with the Facebook generation.
Best Rebuttal — Tan Jee Say 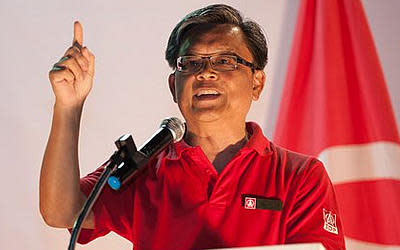 SDP candidate Tan Jee Say defended his credentials. (Yahoo! photo/Faris Mokhtar)
When Singapore Democratic Party (SDP) candidate Tan Jee Say suggested a S$60 billion investment to transform the economy to a services-centric one, Minister Mentor Lee Kuan Yew slammed Tan and said: "He has no qualifications to say that and he is wrong. If you don't have manufacturing, you're going to have trouble with jobs."
But Tan had the credentials to back it up.
"I am surprised; I studied economics at Oxford University and for six years, I worked in the Ministry of Trade and Industry (MTI) where I headed economic and manpower planning. So I have knowledge of both economic theory and development economics. In addition, my proposals have been endorsed by Lord Butler who served three British Prime Ministers."
Best Apology -- PM Lee
There were many during the elections campaign but the one that stood out was that of PM Lee's.
He said sorry not once, but twice as he admitted his government had shortcomings and had made mistakes across a range of issues such as housing and transport. Who knows how many votes this will have saved the PAP?
"We made a mistake when we let Mas Selamat run away. We made a mistake when Orchard Road got flooded... We're sorry we didn't get it exactly right, but I hope you will understand and bear with us because we are trying our best to fix the problems."
Best Rally Speech -- Nicole Seah 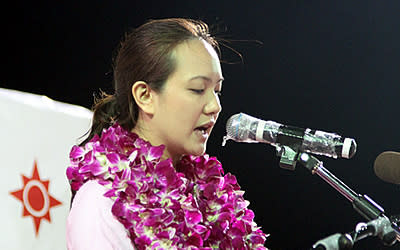 Nicole Seah makes a surprise apology on behalf of MM Lee. (Yahoo! photo/Kzan Kek)
The National Solidarity Party's (NSP) internet phenomenon Nicole Seah, 24, has been one of the major highlights of this GE. Quick, someone sign her up as an actress or model.
Since her introduction to the public in April, she's won over hordes of voters with her honest and straight-talking style. She won over a whole lot more fans when she delivered a surprise apology on behalf of Chinese Singaporeans for MM Lee's remarks on Malays.
"On behalf of the Chinese Singaporeans, I would like to apologise to the Muslim community for the comments that MM Lee made."
Speaking in Malay, she later told the 15-000 strong audience, "I would like you to know that my hopes are for us to progress as one Singaporean regardless of race or religion. I would like to build a community where no one gets left behind." Impressive.
Best Spoof — Darth Vader video
The video pokes fun at the Tanjong Pagar GRC walkover, the only constituency that was uncontested after a group of independents belatedly tried but failed to submit the necessary papers in time. Simply watch and pay attention to the details.
Best Analogy — Low Thia Khiang 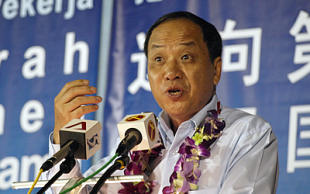 Low Thia Khiang launches an analogy battle between PAP and WP during the General Elections. (Yahoo! photo/Aeron …
The award for best analogy goes to Worker's Party chief Low Thia Khiang for coming up with the "co-driver" analogy. The analogy sparked off a series of debates and rebuttals between the PAP and WP over the next eight days.
"Bear in mind that just putting on a safety belt and hope that the driver will drive you to your destination is not enough. A co-driver is essential, especially as road gets tougher to navigate. The co-driver is there to slap the driver when he drives off course or when he falls asleep or drives dangerously."
Worst quote -- MM Lee
By far the snarkiest remark of the last week must have been MM Lee Kuan Yew's "repent" comment.
During a press conference at a PAP branch last Saturday, the elder statesman of Singapore said, "If Aljunied decides to go that way, well Aljunied has five years to live and repent."
Dear sir, is it considered a sin to vote for the opposition? Not the last time we checked.
Worst Rally Speech — Tie between Teo Ser Luck and Lim Zirui
Teo Ser Luck transformed himself into somewhat of an overaged, over-enthusiastic cheerleader during one of the PAP rallies by yelling all the names of six-man Pasir Ris-Punggol GRC team.
The Senior Parliamentary Secretary for the Ministry of Community Development, Youth and Sports saved the best for last when he shouted for the estimated 1,000-crowd to chant his own name. The response was, er, less than encouraging.

Watch the video here (be patient, it comes near the end)

Not to be outdone, Reform Party's Lim Zirui also did himself no favours.
The 24-year-old final year undergraduate sparked a 25-page debate on a popular forum after he referred to a hall allocation problem many NTU students were facing during a rally.
Online netizens slammed him for it.
"The allocation of NTU halls have nothing to do with the nation. He should only bring this issue up if he is standing for the NTU student union elections," commented Fyre. 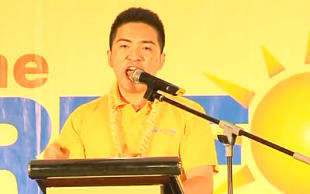 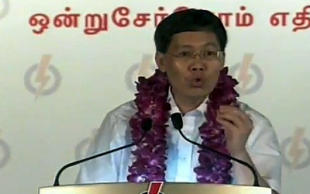 Lui Tuck Yew tells voters about a "trees and mushrooms" story. (Yahoo! photo/YouTube)
MICA Minister Lui Tuck Yew joined the battle for best analogy when he threw in one of his own -- "the story of the trees and mushrooms". Lui told a story about a village which was sheltered by tall trees which protected it from storms.
He called the opposition "mushrooms" that would sprout around a tree once every five years for a few months and told the villagers to be wary of the mushrooms.
An arborist later wrote in to Today and said that "mushrooms can be indicators of the tree's health."
Popular satirist blogger mrbrown also tweeted, "Mushrooms grow on dead trees."
Most 'what the ?' moment -- 'She looks good when sweating'
An entire forum thread that spanned 20 pages was dedicated to a photo of Nicole Seah wiping off her perspiration.
Forummers posted comments about their somewhat strange obsession of her and made some pretty weird and nasty remarks. Comments so nasty we're not even allowed to post.
\ 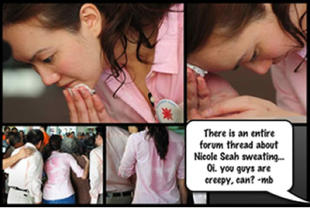 Popular blogger mrbrown joins in the fun. (Photo: mrbrown)
Posted by Helluo Librorum at 7:38 AM