A signing session for a petition that's calling for a by-election in Potong Pasir was stopped by the police on Tuesday evening.

Singapore People's Party (SPP) member Alex Tan, 23, who was present at the scene, told Yahoo! Singapore that after receiving news that people were gathering in the area, he went to the Potong Pasir Town Council at Blk 121 to speak to three plainclothes police officers from the Tanglin Division.

They told him that the petition signing could not be carried out in public as it is considered illegal, and can  only be done indoors or at the Speakers' Corner.

Some of the 30 to 40 supporters who were at the scene eventually left while a few others remained behind.

"While some people understood and left, there were others who remained in the area. Some were angry when told that they had to disperse," said Tan.

He added that SPP members were not involved in the petition signing and that he was there to try and disperse the crowd after finding out about the gathering.

The petition signing, which was to be held from 4 pm to 8.30pm, was organised by a member of a public after Saturday's polls saw the People's Action Party Sitoh Yi Pin defeat Singapore People's Party (SPP) candidate Lina Chiam by a mere 114 votes.

Yahoo! Singapore understands that members of the party's executive committee were unaware of the petition signing and were attending a "GE thank you" dinner for volunteers. On Monday, SPP chief Chiam See Tong himself also dismissed the idea of a petition for a by-election, saying it had no valid grounds.

Police confirmed that a resident had called them to report a commotion at the void deck area of block 108 in Potong Pasir.

"It was established that there was a dispute among residents arising from a petition signing earlier. Police then warned the parties concerned that what they are doing may constitute to an illegal public assembly, and advised them to discontinue and disperse immediately. Police are investigating the incident," said Singapore Police Force spokesperson, Humphrey Sew. 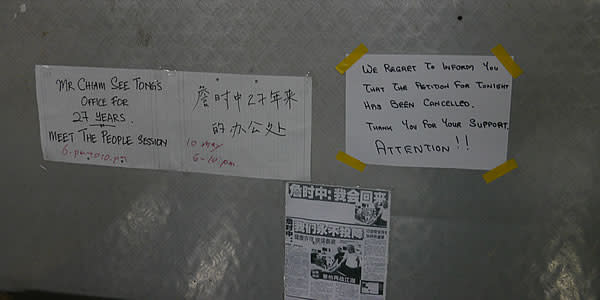 A notice informing residents that the petition signing has been cancelled. (Yahoo! photo/Faris Mokhtar)

Potong Pasir resident Jed Senthil, 25, a tutor, witnessed the commotion and said, "The police questioned some people who were there but there was no standoff between the police and residents."

Another witness, who only wanted to be known as Jane, said, "There was no angry mob or whatsoever, just a heated debate between two guys which attracted a large crowd around them." 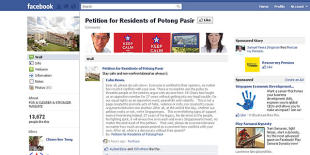 The Facebook online petition has garnered over 13,000 'likes'. (screengrab)
The petition organisers have since terminated the drive till further notice and have posted a message on its Facebook page, urging residents to remain calm and non-confrontational".

A Facebook page has also been set up, calling for a Potong Pasir by-election. It has garnered over 13,000 "likes" so far.
Posted by Helluo Librorum at 2:32 AM