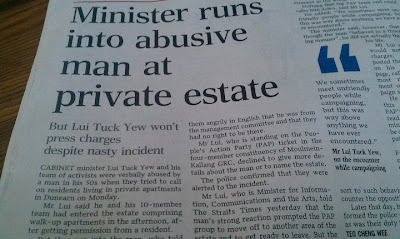 Here are the details. I suggest u leave out my details and condo name:

Condo has only 19 units so we do not have security. However access is only by activating an intercom from the main direct to the resident u want to visit. The gate is than opened by the resident from a switch in his home after he satisfied that the person visiting him is bonafide. This is to keep non residents and unauthorised visitors out. We had some breakin and we are very security consoius since we don't have a guard or cameras.

Yesterday don know how a whole bunch of about 15-20 PAP entourage walked into the compound of the condo unannounced like they own the place and started spreading apround and knocking on the doors of the residents annoying the residents.

This was at about 1pm. I only know about this when 2-3 persons dressed in all white and carrying brochures strated shouting "hellO Hello thru my open door.

I was shocked and asked who they were. They said they werer on PAP walkabout and wanted to talk to me.

I am an MC member and got really mad and shouted at then " Who gave you permission to come in. I want to speak to your MP"

They cld not answer me and started running away down the stairs. I followed them shouting who is your MP. I want to speak to him.

I ran after them and caught up with them as they just about half way leaving the estate and still in the compound of the estate.

I confronted the minister who acted very fierce with me. I asked who gave him permission to come .He said "resident' and could not tell me who. In any case it is not a license to go all over he estate. I shouted at him saying he was trespassing and he needed to have MC approval. That i was MC member and no one asked for approval.

He repliled " i know you are not pappy with PAP government so no need to be like that and extended his hand to shake mine".

I said I will not shake his hand and shouted to him to get out of the estate . I followed up by saying this was the worst goverment and, hoped he will be voted out.

He turned around and his whole bunch of people quickly ran out of the estate. As he was leaving I heard hi say " Did anyone of you record down the conversation"

I am not sure he called the police or not. No police have contacted me yet.

Meanwhile the condo mgt corporation is issuing a notice to all residents not to allow any piolitcal parties to enter the compound and, to remind them that they need to get MC approval.

I want to refute a few things:

a. I never made any threats, I purosely stood some distance and put my hands behind my back to ensure no accusations. i did repeatedly shout at them to get out as they were trespassing. I think they know that.

b. The so called vulgaritries they refer to were words like "lousy", "useless", "bloody"

c. I felt more threatened as there were 15 or so of them looking at me menacingly just cos their MP kene questioned vigorously.
Posted by Helluo Librorum at 4:28 PM