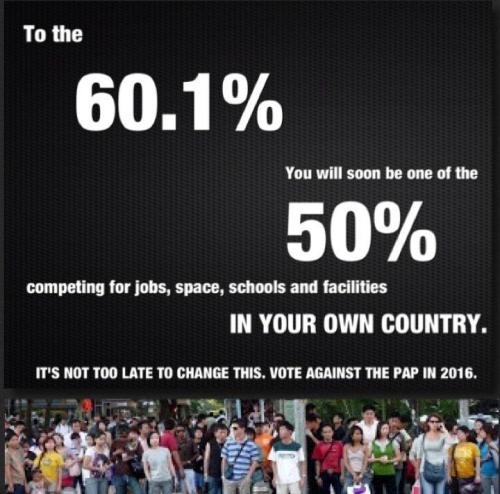 Thousands of Singaporeans demonstrated today against a government plan to increase the island’s population through immigration, saying the policy will erode the national identity and threaten their livelihoods.

Protesters gathered at Speakers’ Corner at Hong Lim Park at the edge of the city’s financial district on a rainy afternoon, many dressed in black and carrying signs opposing the plan. Lawmakers from Prime Minister Lee Hsien Loong’s ruling party last week endorsed a white paper that outlined proposals including allowing more foreigners through 2030 to boost the workforce.

Today’s rally increases pressure on the government to slow an influx of immigrants that has been blamed for infrastructure strains, record-high housing and transport costs and competition for jobs. Singapore’s population has jumped by more than 1.1 million since mid-2004 to 5.3 million, stoking social tensions and public discontent that is weakening support for Lee’s People’s Action Party.

“The size of the crowd shows people are angry,” said Tan Jee Say, a candidate in Singapore’s 2011 presidential election, who joined the protest. “It will send a signal to the government and I hope it will react in a sensible way and see that people are concerned. The government should not push the white paper down Singaporeans’ throats.”

Organizers estimated that more than 3,000 people joined the demonstration at the 0.94-hectare (2.3-acre) park that served as a venue for political rallies in the 1950s and 1960s. They sang patriotic songs. Some signs demanded a referendum on the white paper, while others said “we want to be heard, not herded,”and “waiting for 2016,” when the next general election is due.

Members of the opposition say the government’s policy to spur economic growth through immigration isn’t sustainable.

There may be as many as 6 million people in Singapore by 2020, and the government will boost infrastructure to accommodate a population of 6.9 million by 2030, according to the white paper that was published last month.

The government will take in between 15,000 and 25,000 new citizens and grant about 30,000 permanent-resident permits annually, according to the paper titled “A Sustainable Population for a Dynamic Singapore.”

Protesters expressed unhappiness with the policy that could see citizens, including new ones, making up only one of every two people on the island smaller in size than New York City by the end of the next decade should the population reach 6.9 million. Singapore is the third-most expensive Asian city to live in and the sixth globally, according to an Economist Intelligence Unit ranking of 131 cities around the world published this month.

“Instead of increasing the population of this country so quickly, maybe we should focus on those that have been left behind,” said Sudhir Vadaketh, author of “Floating on a Malayan Breeze,” a socio-economic narrative on Singapore and Malaysia. “A lot of Singaporeans are feeling a great sense of loss of identity. With continued high immigration, I worry about that sense of identity will be diluted even more.”

Demonstrations in Singapore are rare as the government imposes strict controls on assemblies and speeches, limiting outdoor protests to locations such as Speakers’ Corner. Authorities say such laws help maintain social stability in a country that was wracked by communal violence between ethnic Malays and Chinese in the 1960s.

Speakers’ Corner was modeled after the section of London’s Hyde Park traditionally set aside for free speech.

The white paper was aimed at setting a framework to address Singapore’s demographic challenges of an aging population and a shrinking workforce. The island-nation’s first cohort of baby boomers turned 65 last year, and its number of elderly will triple to 900,000 by 2030, according to the National Population and Talent Division.

In a city with 3.3 million citizens and 2 million foreigners, complaints about overseas workers depriving locals of jobs and driving up home prices helped opposition parties win record support in the 2011 general election. Lee is under pressure to placate voters without disrupting the entry of talent and labor that helped forge Southeast Asia’s only advanced economy.

Ranked the easiest place to do business for seven straight years by the World Bank, Singapore is competing with lower-cost neighbors such as Malaysia and Indonesia for foreign investment as an uneven global recovery hurts demand for exports.

Since the 2011 polls, Lee’s party has lost two by-elections. The government “paid a political price” with the infrastructure strains as a result of a bigger population, the prime minister said last month. 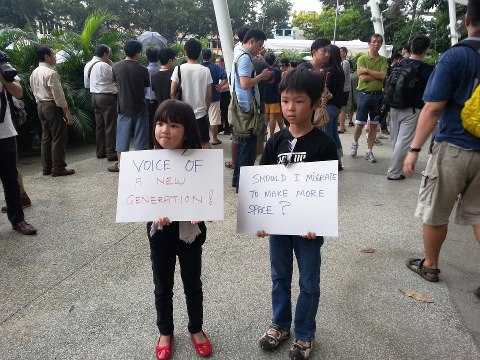 The peaceful rally, held at an officially designated protest zone, was staged by a civic group after the government said foreigners could account for nearly half of the densely packed island's population in less than 20 years.

Organisers estimated the crowd at 3,000, but AFP reporters on the scene said between 1,000 and 1,500 people had taken part despite afternoon downpours, making it the biggest protest in Singapore in recent years.

Rally leaders, who used Facebook and other online platforms to draw support, openly attacked the People's Action Party (PAP), which has been in power for more than 50 years, over its immigration and other policies.

"The large crowd here shows the PAP government that they are not afraid any more, they don't want to hide behind a moniker on Facebook to show their displeasure," said chief organiser Gilbert Goh, a former opposition candidate for parliament.

"They are showing their deep displeasure with the white paper," he told AFP, referring to a controversial population projection issued last month.

A spokesman for the Singapore Police told AFP that it was not monitoring the size of the crowd, which was largely clad in black, armed with clappers and clutched a sea of umbrellas.

There were no signs of riot police in or around the rally venue, a grassy park where protesters are allowed to address the public in a spot known as Speakers' Corner.

A government policy paper last month said the population could range between 6.5 and 6.9 million by 2030, with foreigners making up 45 percent because Singaporeans are not producing enough babies to sustain economic growth.

Citizens currently make up 62 percent of the current population of 5.3 million, of whom more than a third are foreign-born.

"Stop selling memberships. We are not a country club," read a handmade poster, referring to naturalisation.

Protests are rare in Singapore, a wealthy island republic known for strict security and social controls, but Facebook, Twitter and other social media have set the tone for political debate in recent years.

Rallies of more than a few dozen people are unusual.

In October 2008, about 600 angry investors gathered in the same spot, urging the Singapore central bank to help them recover money they lost from investments linked to collapsed US bank Lehman Brothers and other institutions.

Saturday's rally came less than two years after the general election of May 2011, when the ruling party suffered its worst ever performance, with immigration already a sensitive issue.

Foreigners have been blamed for stealing Singaporeans' jobs as well as straining housing, transport and medical services.

Goh, the rally organiser, ran unsuccessfully for parliament in 2011 under the opposition National Solidarity Party.

On the eve of the rally, Goh issued a public apology to foreigners living in Singapore for an earlier posting in which he listed racial profiles and social habits of various Asian nationalities as well as westerners.

"It's rude and insensitive to their feelings," Goh wrote, adding that he did not want to "stir up unpleasant xenophobic sentiments within the country".

4,000 turn up at Speakers' Corner for population White Paper protest

Organised by transitioning.org, a support site for unemployed, the nearly four-hour protest saw people of all age ranges and races turn up in the light drizzle, with umbrellas and some with home-made, colourful placards and posters. Many also came with their young children in tow.

Each speaker was given 10 minutes to address the crowd.


Jee Say, a former high-flying civil servant, asked if there was a need to convert the migrant population in Singapore to be new citizens.

He also questioned said if half the population are foreigners in 2030, “in the event of a crisis, the other non-Singaporean half will pull in a different direction”, he says to the swelling crowd.

Ravi Philemon from opposition party NSP asked the crowd if bringing in an average of 900,000 to 1 million foreigners every decade was an acceptable number, to which the crowd responded with a thunderous “no”.
He then tabled the notion that the paper dilutes the Singapore core for an allegedly relentless economic pursuit.

“The White Paper revealed two things, one, that the government does not seem to understand what it means to be an ordinary Singaporean and, two, that it does not seem to care,” said another speaker, Wijeysingha.
“Singaporeans are and must be the first and last object of policy”, he said.

The peaceful protest was marked by poignant moments when the crowd sang "Count On Me, Singapore" at the midway mark, and also at the end when the National Pledge was lustily recited in unison.

Organiser Gilbert Goh told Yahoo! Singapore he was pleased with the turnout. Calling the protest "history-making", he said he initially only expected 200 to show.

"This protest event is meant for Singaporeans to come here in a peaceful manner to show their displeasure at the 6.9 million population target," he said.

"We also wanted to show Singaporeans that there's a place for you to come to legitimately protest against any policy that you have against the government. You don't have to sit behind Facebook and complain. You can show up in unity, in person to complain," he added.

Goh also apologised after a two-year-old blog post by him that was overtly xenophobic and anti-foreigner in nature was re-posted on Twitter a day before the event.

“Unfortunately, what we write always comes back to haunt us. We need to move on. This event is not about xenophobia, it’s more about the 6.9 million figure. But people are offended, so I apologise," he said.

"I’m human, I make mistakes. I wrote it two years ago. Since then I have learnt to be a bit more accepting. They’re here to stay. They’re going to be the majority of the population in 2030, and Singaporeans the minority. We probably have to accept this fact, probably even embrace them.”

Singaporeans who were present also said they'd showed up to make their voices heard.

Others said they were curious and came down for the event after finding out about it on Facebook.

"A lot of people are not happy and it’s not every day that they show their unhappiness. I just came to have a look at soak up the atmosphere," said student Jenny Wang, 21.

Last week, Parliament endorsed an amended motion to the White Paper on Population by 77 votes to 13.

The amended motion filed by Holland-Bukit Timah MP Liang Eng Hwa stated that the White Paper “supports maintaining a strong Singaporean core by encouraging more Singaporeans to get married and have children, supplemented by a calibrated pace of immigration to prevent the citizen population from shrinking”.

PM Lee, in an address before the motion was endorsed, stressed that the 6.9 million population figure had been taken out of context and that the paper was not about any specific population size for beyond 2020, but rather that it was being used for the purpose of land use and infrastructure planning.