Seeing the invisible gorillas: The politics of the Population White Paper debate

Devadas Krishnadas is the Director of Future-Moves. He was previously Deputy Director of Fiscal Policy at the Ministry of Finance.


Christopher Chablis and Daniel Simons are authors of the book The Invisible Gorilla. The book is based on an experiment they conducted several years ago at Harvard. In the study, they asked subjects to watch a video of a group of people playing basketball. They set them the task of counting the number of passes the players made. During the video a man wearing gorilla suit walked past the screen. At the end of the 1 minute video the test subjects were quizzed on what they saw. More than half of the subjects could not recall seeing the gorilla at all. The study showed that when we are asked to concentrate intensely on certain things we can become so focused that we can miss even the most obvious things staring at us in the face.

The debate in parliament over the Population White Paper seems to be to an Invisible Gorilla experiment writ large. The Members have been busy disputing percentages in labour force growth, trading rhetoric about who cares more about the Singaporean core. PAP MPs have been, not unnaturally, supporting the White Paper but signalling concerns. But one of them has gone further.

Mr Inderjit Singh has had the courage to mark out a distinct and unambiguous position that is not in favour of the White Paper and who has proposed specific remedies, even if only for the near term. His action is indicative that there is much more political meat on the bone than is presently being chewed in the House. So what are we missing?

Let me point out not 1 but 4 gorillas walking across the court of public discussion.

Show me the Money

First, is the observation that the White Paper is not only about population strategy it is also a de facto supply bill. The government rationalises the trade-offs to be made with an increase in population with huge public investments to come to build up infrastructure. Much of this infrastructure build is predicated first on the reclamation of land. Reclamation is a very expensive exercise. Voting for the White Paper is thus essentially the same as giving a blanket approval for these massive expenditures rolling out over a generation.

These expenditures will have to be paid for naturally. Consequently, if we follow the thread further we can see that voting for White Paper also implies endorsement for a mixture of adjustments to generate the revenue for these expenditures. These could include additional taxation, a Constitutional adjustment to increase the contribution from Net Investment Returns and an application to the President to draw down the reserves.

Once the intent of the White Paper is endorsed the necessary decisions to raise the required revenue to finance the enabling infrastructure will be fait accompli. Yet to date no Member has asked any question on how much and how the many mitigating proposals the PAP as put forward will be financed. No Member of the House has asked what are the fiscal trade-offs and what will be the opportunity costs for these expenditures.

Second, the discussion about population number, whether we call it a ‘target’, ‘projection’ or ‘planning parameter’, is misguided. The discussion of consequence is about the internal logic engine of the White Paper which leads to the number.

First, the future will be defined by slow growth.

Second, productivity will be marginal.

Third, the growth will thus be made up by labour force additions.

Fourth, because we are ageing society with low fertility rates, we have to source an external supply for this added labour.

Fifth, if we cannot raise our indigenous fertility rate then we must convert some of the added labour into residents to grow the fertility base of the population.

Sixth, if the added population maintains a low fertility we will have even more aged so we need to add more labour to support the Old Age Support Ratio.

The White Paper has 2 not 1 notable numbers and both are arbitrary. The first is the 6.9 million population figure. The second is the year 2030. If we ride the logic train we must accept that there is no magic event in 2030, the train keeps running. Hence, the 6.9 number is bogus. There cannot be a number because we will forever be running the logic as a loop.

This is the intellectual flaw in the White Paper. Members should be pointing out this fallacy of logic. This is a logic gap which cannot be bridged by announcements of additional infrastructure plans.

It would be welcome if the debate in the House moved on to establishing why how productivity is so low even as we become an advanced economy, why our fertility rate is relentlessly declining even as our standards of living rise and why we have lagging wages for many even as we have a rising net worth for a few. Solving these knotty problems may be difficult but therein lies at least part of a more sustainable solution. Mr Inderjit Singh is wise in his general caution against rushing ahead when underlying problems are unresolved.

Third, there has been a spirited discussion about the Singaporean Core. This is all well and good. Sylvia Lim pointed out the dilution effect in the pool of residents caused by the addition of foreigners. This was countered by Ms Grace Fu who pointed to the White Paper’s target/projection/planning parameter that the ratio of residents to total population would be 1 in 2 which would be adequate to maintain a ‘core’.

We can be confident that all Members want the best for Singapore. But they are often talking past each other because what is really being discussed here is the quality of the Singaporean identity not its quantity. As pointed out in my last article, it is about different Visions. The Visions are anchored by different perspectives about identity.

There is one perspective which sees common history, shared experiences through the journey of nation building as not only a condition of identity but its description.

There is the other perspective which is that identity is entirely transactional and the possession of an administrative document attesting national affiliation is validation in and of itself of identity.

This first perspective is in effect a reflection of a political idea about national destiny. It is about what the numbers mean. One that asks us to believe in ourselves, which challenges us to overcome the odds and which defies us to find a way to round the corner on three wheels. It does not lend itself to explanation in terms of conventional economics or planning models.

So basically this view is low on the economic math but high on belief and national self-confidence. Funny thing is, that is exactly where we were in 1965. We translated our circumstances then, could we not do so again? Who knows? Emotive as this perspective is, it is a risk. The difference between 1965 and today is that we had no choice then, but we do now.

The second perspective reveals an entirely transactional model of thinking. It is great on the economic math and the planning computations. But because it places emphasis only on what can be measured, it can tell you the price of everything but not its value. It is about what the numbers do. Everything is tradable and substitutable in this world view. When speaking of the ‘core’ or ‘identity’, the words are the same in both perspectives but in one, they are the point of the perspective, in the other they seem to be merely labels to paste over numbers.

A Pattern of Behaviour

The final observation is that over 4 political elections over 2 years, we have seen a persistent swing of support away from the PAP. Even the Presidential Election should be seen as part of this pattern. It is clear by now that one of the driving forces behind this phenomena is the general unhappiness amongst voters over the recent history and current effects of the population augmentation strategy to date.

Yet, the PAP has persisted in doubling down on the plan. This is either a testimony to its political boldness or a manifestation of what Margaret Heffernan has referred to as wilful blindness. But perhaps, the political friction to date can be put down, as the Public Relations practitioner Ms Rose Tan suggest in her forum letter in the Straits Times, to poor communication. This may be true. It may not be.

While the year 2030 may be a red herring, there is a year date that does matter. That is 2016, when we will have the next general election. The White Paper is a 20 year plan and the execution of it and its related programmes will so fundamentally alter Singapore that in effect, the plan is the PAP manifesto for the next 4 elections. As the debate over population becomes more protracted, it will, I think, become clear that we are not only talking about the future of Singapore. We are also talking about the future of the PAP. 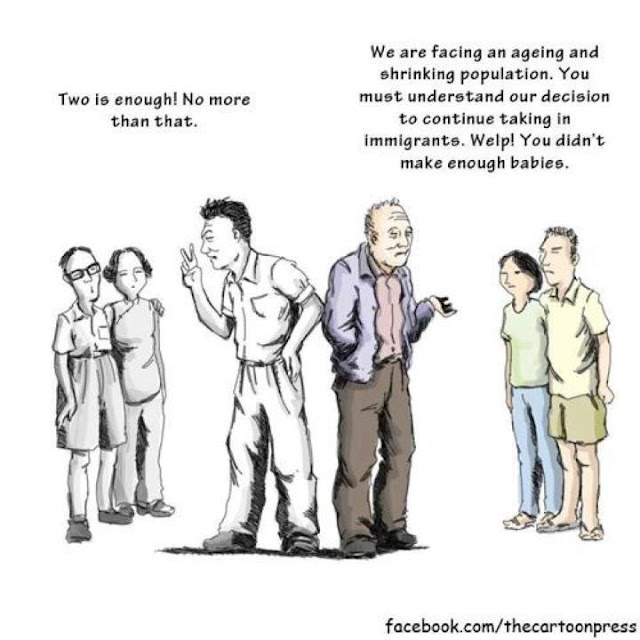 Posted by Helluo Librorum at 1:12 PM

Thanks for a concise summary. The report and the entire debate by WP/PAP in parliament is total waste of time as they've brutal majority to shove the things forward whether Singapores like or hate any part of the report.

Irrespective, my nagging feeling is that the noise that ShittyTimes is creating along with other mainstream media is to deviate folks attention away from AIMgate and the role of PAP owned private entities holding Singapore for ransom, shall the people decide otherwise in 2016. The whole charade has a uncanny similarity of Annabel Chong (anyone care to remember our own Singaporean TALENT from yesteryears) ;-)

Pay And Profit (PAP) have long lost public trust and credibility thru skewed laws and policies that "say one thing but do another thing".

Instead, owner-occupiers (whether Majority Consenters or Minority Dissenters) become En Bloc Refugees (buy into old estate and risk getting another en bloc), Squatters (rent while praying for market crash), Downgraders (sell condo and buy HDB), or Downsizers (double the price or half the size in same location with en bloc sale proceeds).

EXAMPLE 3: SGH "PATIENTS at the heart of all we do" but then Health Minister Khaw BW gave "Option of JB NURSING HOMES" where he said that land/labour are cheap and near enuf to come back to Spore in emergency.

If Nightingale Nursing Home elder-abuse in 2011 took place in JB, what regulatory/sovereignty authority would MOH have, Mr Khaw?

Hi, may I ask if you mind me using the political cartoon for my assignment? If possible, I would like to know when and where it was published. Thank you.

Unfortunately I've neglected to record the source of the cartoon.