SINGAPORE - A Singapore journalism professor who has written extensively about the lack of media freedom in the city-state has been denied tenure a second time, and hundreds of his supporters at home and abroad are demanding to know why.

Supporters of Cherian George, an associate professor in journalism studies at the Nanyang Technological University's School of Communication and Information, contend that his credentials are so strong that politics must be behind the university's unwillingness to give him a permanent faculty position. His first application for tenure was rejected in 2009.

Karin Wahl-Jorgensen, a professor from Wales' Cardiff School of Journalism, Media and Cultural Studies, said she was one of the outside experts who reviewed George's case for tenure. She called him one of the "foremost public intellectuals in Singapore," and called the rejection "incomprehensible and plainly absurd."

"I can only speculate about the reasons for this decision not to grant tenure to someone known for being critical of the government but it does not make NTU or Singapore look good in the eyes of the international academic community, and raises serious questions about academic freedom," Wahl-Jorgensen said in an email to The Associated Press.

The Southeast Asian country, known for its groomed image of efficient governance and political stability, has long been criticized by human-rights groups for using measures such as criminal and civil defamation to stifle opposition voices critical of the government and its leaders. The People's Action Party has ruled since 1959 but has seen support drop in recent years as discontent grows over the high cost of living, an influx of foreigners and rising income inequality.

A former journalist, George holds degrees from Cambridge and Columbia University and obtained his doctorate from Stanford University. He is known for his books such as "Freedom From The Press," which assessed the state of media and politics in Singapore.

Nanyang Technological University did not respond directly to queries from the Associated Press. In a media statement Tuesday evening, the public university said it has a "rigorous tenure process" in place but added that "as all employment matters are confidential, NTU will not comment on any specific cases."

George said he learned of the rejection last week, but he declined to comment further. A former student of his, Bhavan Jaipragas, began a petition demanding that the university disclose reasons behind its decision to deny George tenure, along with details on how it assesses the teaching quality of faculty members seeking tenure.

The petition had received about 800 signatories by Wednesday. Bhavan said copies were to be delivered later that day to NTU's president and other key university leaders.

"There are complaints of curtailment of academic freedom and we want the university to categorically assure the student body there is no policy of curtailment and political discrimination," said Bhavan. "We don't want them to just say it but to prove it to us."

The issue has reignited debate over freedom of thought in Singapore's universities, a debate that also has brought attention to a joint venture between Yale University and the National University of Singapore to open a liberal arts college in the city-state. Enrollment begins in July this year.

Some Yale academics have criticized the move, accusing the university of compromising its values for being involved in a country where freedom of assembly is restricted and homosexual activity banned. The president of Yale-NUS, Pericles Lewis, has said the college has received guarantees that academic freedom will be protected.


An outspoken associate professor for journalism in Nanyang Technological University (NTU) has been denied tenure, sparking an outcry and raising questions over academic freedom in Singapore.

In subsequent tweets, Wahl-Jorgensen, who revealed that she was one of the reviewers for George’s case, said she was “outraged” at the decision not to grant him tenure, and that it could have been “because he sometimes expressed political opinions”.

An adjunct senior research fellow at the Institute of Policy Studies and former journalist with The Straits Times, George has spoken out against media control and has been critical of the ruling People’s Action Party. He joined NTU in 2004.

Wahl-Jorgensen alluded to NTU’s decision being detrimental “for academic freedom” and said it raised “big question marks about international collaborations” with Singapore and NTU.

She said also said George’s application was “watertight” and believed the board’s decision “made no sense on grounds of research and teaching”.

Tenure would give him the contractual right not to have his position terminated without just cause. George was previously denied tenure once in 2009 when he was promoted to the position of associate professor. Typically, academic promotions are accompanied by tenures.

In reaction to the news, an online petition was set up by final-year WKWSCI student Bhavan Jaipragas to urge the NTU board to “affirm (George’s) stellar teaching credentials and disclose the reasons behind the decision to deny his tenure”.

A day after the petition was initiated, the number of signatories have more than doubled to 686 signatories as of press time.

“We felt it was very important any impression that Dr George's teaching skills were sub-par had to be quickly demolished. We also want the school and university to… categorically dispel claims of curtailment of academic freedom in NTU,” said Bhavan to Yahoo! Singapore.

Bhavan said he heard of the news from several sources over the weekend, before such tipoffs were confirmed by Wahl-Jorgensen’s tweets. He said he will deliver hard copies of the petition with the list of signatories to four key members of the NTU leadership, including NTU president Bertil Andersson.

In one of the petition’s comments, associate professor William Ray Lengenbach, head of media at Sunway University College, said, “Cherian George is a significant regional intellectual and his views on Singapore politics should have no bearing on his tenure. If there indeed is government pressure on the university's decisions, it is time for academic staff and administration to stand up against such pressures.”

Among several high-profile signatories who have come forward include Lai Ah Eng, senior research fellow at the Asian Research Institute at the National University of Singapore.

She said, "Our local intellectual resources are already so limited and seem to be declining with academic globalisation. We need people who have both global and local knowledge, and Cherian has it. If we do not hire the likes of him, then who do we hire?"

Among the students who have spoken out against the alleged grounds, alumnus Johnson Zhang commended George for being friendly and knowledgeable. “To say that the quality of Dr George's teaching was 'sub-par' would be an insult to us graduates who had the honour of learning from him,” said Zhang.

“As someone who has worked with Dr George for close to two decades, I am dumbfounded by the news. I don't know of many professors in NTU who give as much to the students, even fewer who have clear vision of how a great journalism department in an university can be and should be,” said WKWSCI photojournalism lecturer Tay Kay Chin in a post on Facebook.

In a statement issued Tuesday night, an NTU spokesperson wrote:"NTU has a rigorous tenure process. All NTU faculty seeking tenure go through the same process. More than 1,000 faculty have gone through this process at NTU in the last six years and so far, more than 55% have been granted tenure."


"The tenure review process is purely a peer-driven academic exercise comprising internal and external reviewers. The two equally important criteria are distinction in research and scholarship, and high quality teaching. Service and other contributions to the university, profession, or community are also taken into consideration."

"As all employment matters are confidential, NTU will not comment on any specific cases."

Last year, the issue of academic freedom was raised in relation to the launch of the Yale-NUS College, a partnership with Yale University and the National University of Singapore (NUS). Yale members passed a resolution expressing their concern restriction of civil liberties in Singapore.

A Protest against NTU's denial of tenure to Cherian George 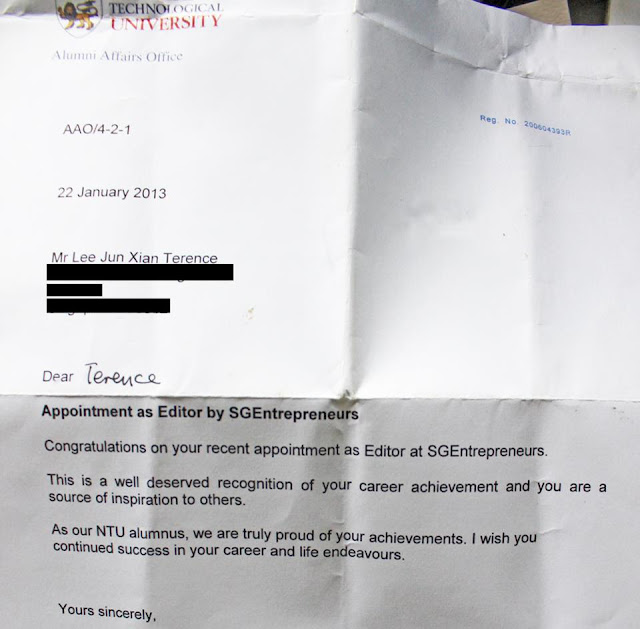 Thanks but no thanks, NTU

I felt compelled to do this after the whole Cherian George debacle erupted. It might make me seem a little opportunistic, but I hope the larger point I'm making wins out. Anyway, here's the background: In January, NTU sent me a congratulatory letter (see photo) about my recent appointment as editor of SGE. It's a nice gesture no doubt, but after what has played out recently, I feel like I can no longer accept the content of the letter.

After all, I owe a lot of what I am today to the journalism faculty at WKWSCI, of which Cherian George played a major role in shaping.

So, I've decided to send the letter back to NTU to protest their decision not to grant Cherian George tenure. Here's my reply to them:
Dear Director of the Alumni Affairs,

first of all, I would like to thank you for sending out the congratulatory letter to me about my recent promotion. It came as a pleasant surprise, and I deeply appreciate the gesture.

However, after the recent debacle in which an esteemed journalism prof was denied tenure for dubious reasons, I feel compelled to reject the letter. Please don't take this personally, as faculty affairs certainly isn't under your purview. So if for any reason you are inconvenienced, please accept my sincerest apologies.

But do hear me out. I don't think I can accept praise from the university when the person that inspired me and many others isn't given due credit and recognition. I echo others in saying that Cherian George is one of the most engaging instructors in NTU, and his example has certainly inspired me to pursue my current career path.

So, I am sending the letter back to the university as a form of protest. Please show my note to your colleagues, and you may send it back to me when he is finally given due credit.

Look at the list of people who have been granted tenureship at NTU. Examine their teaching credentials, leadership and expertise and many would be found very lacking. But all of them have one thing is common. A total disregard for academic freedom.In layman's terms, balls less creatures or balls lickers