*The writer is a professor of business and economics at the HSBC Business School at the Peking University Graduate School. An expert in sovereign wealth funds, his writings have been published in such leading journals as the Review of International Economics, the Journal of Public Economic Theory, and the International Finance Review on such diverse topics as CDS pricing, the WTO, and the economics of adoption and abortion. His work has also been cited by a variety of media outlets including the Wall Street Journal and the Financial Times


I have gotten emails asking if I can simplify some of the points I have been trying to make, so I have decided to try putting up pictures that capture some of these points. Hopefully, a picture will be worth a thousand words.

The first figure is a comparison of the FTSE Strait Times Index and the MSCI Singapore equity indexes since 1974. The MSCI is slightly lower owing probably to differences in how it is calculated and being based on more stocks while the FTSE focuses on the bigger companies. As you can clearly see, they are very closely correlated. 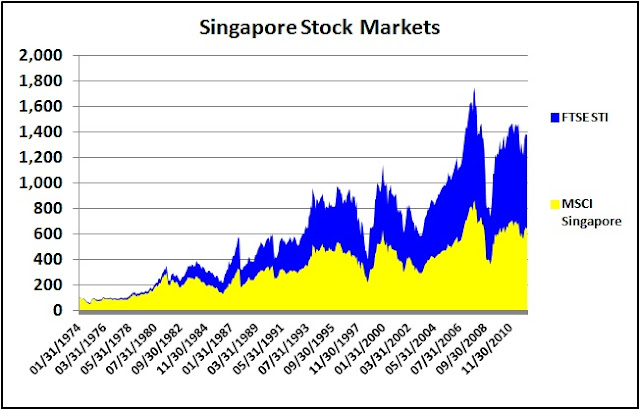 Our next picture is the same exact picture, except this time I have added the returns that Temasek claims to have earned over the same time period. Given that Temasek has been a large investor on the Singaporean exchange, owning at times more than 25% of the Singaporean stock market, they should be closely related. 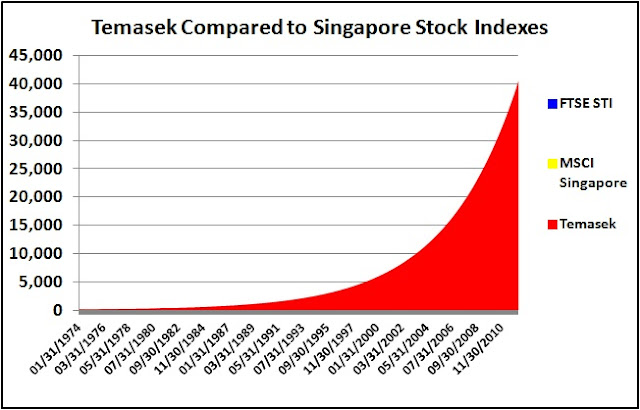 As one can clearly see, Temasek performs much better than even the stock market in its home country of which it is the major investor. In fact, much MUCH better. Is it technically possible Temasek earned this return? Yes. Is it probable? No.

Maybe Temasek could begin investing my money if they are that good? Maybe someone in Singapore would like to invite me for coffee to discuss?

Note: Because Temasek does not break out its returns year by year, I assumed that it earned 17% every year. While this will change the year to year valuations, it does not impact the final valuation.

Related: The Mess that is Singapore (here)
Posted by Helluo Librorum at 7:27 PM