PAP’s hype and marketing to the world is falling apart 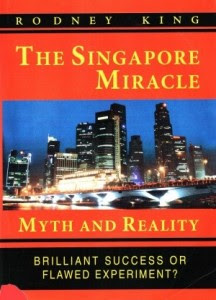 Singapore is brilliant at self-promotion, says an Australian analyst, but it is no financial dynamo. Much of the world has been deluded by its hollow roars of success.

Singapore, the modern city-state known for its authoritarian ways and conservative government, has a reputation for functional efficiency and capitalist success. The smallest member of Asean geographically is often touted as one of Asia’s great success stories – a gleaming city that emerged from the tropical swamps under a strict but wise autocrat, Lee Kuan Yew.

But a fascinating book by Australian Rodney King looks deeper into the “the Singapore Miracle” and reveals that a lot of the city’s supposed successes are in fact hot air.

Reports of Singapore being a dynamic commercial melting pot are, King says, simply the oft-repeated claims of a government that tolerates little dissent, and city leaders who may actually have stifled the sort of entrepreneurial dynamism you get in places such as Hong Kong, Shanghai, Taiwan and maybe even Bangkok. King is a Perth journalist who lived in Singapore for a number of years and worked briefly at the Straits Times.

“The Singapore Miracle – Myth and Reality” casts doubt on the city-state’s claims of cutting-edge efficiency, global competitiveness, economic freedom and transparency. Most Singaporeans are not as affluent as their government makes out, King says in his extensively documented, 500-page tome.


“Books about Singapore usually praise its achievements or criticize its authoritarian rule,” he writes. “But few ever probe its widely publicized claims that it is a brilliant success that other countries should follow.” King argues that Singapore’s workforce productivity is often mediocre and well below that of the West and Asian economies such as Hong Kong.

“The country also displays endemic inefficiencies at both macro and micro-economic levels. The performance of the construction, financial and service sectors is second-rate, while Singapore Airlines does not deserve the top rankings it receives.”

Singapore, he says, has “a dependent and underdeveloped economy”. Multinational companies and state enterprises predominate, and the economy has “low entrepreneurial and innovative capacities and an under-educated workforce”.

The city-state’s supposed affluence is also largely a myth. About 30 per cent of the population still lives in poverty by Western living standards,” he says. And Singapore’s Housing Development Board, Central Provident Fund and state-run health schemes have severe shortcomings.

What Singapore has been good at, he says, is marketing itself.

“Singapore has brilliantly sold itself to the world as an amazing success story to attract foreign investment and talent. It’s managed to get most Western think-tanks and ratings agencies to give it top scores for such things as competitiveness, transparency, economic freedom, etc.

“These bodies reflect the interests of foreign capital and their methodologies are shoddy and incompetent at times. And the statistics they are fed by the Singaporean authorities are often dubious and designed to put Singapore in the best light.’

“To sell itself to the world Singapore has also denigrated and patronised its lesser-developed neighbours.”

Singapore was hardly an economic backwater when Lee Kuan Yew took power in 1959, says King, who has no special regard for the premier, who held office through his People’s Action Party (PAP) for 31 years. Lee is now known as a “Minister mentor” and elder statesman.

“Lee is always carefully listened to, and rather too politely … his views and lectures often receive reverential attention from opinion lenders, American think-tank experts and others who often have little direct first-hand knowledge of Singapore.”

In the early to mid-’60s, Singapore had one of the highest living standards in Asia, with one of the best-educated and hardest working populations. Its strategic location and magnificent harbour – with extensive British-built shipyard facilities – alongside one of the world’s busiest sea-lanes, meant that it became a natural transport hub. And these features were a great asset for industrialisation.

The strategies Lee used to develop Singapore were an open-door policy to foreign capital and export orientation to tap into global trade. They helped the city-state enjoy double-digit growth from the ’60s to the ’80s.

But the Lion City became heavily dependent on foreign capital while state enterprises focused on infrastructure and “nation building concerns”.

Entrepreneurial and innovative capacities have suffered because of a lack of domestic competition and the predominance of state bodies. Public servants running state boards often have little experience of the private sector “and no idea how to run a business”, King and other analysts say.

“The local private sector, normally the seedbed of innovation in most market economies, is stunted and starved of venture capital,” King writes. “The country’s capacity for indigenous research and development and entrepreneurial and innovative endeavors remains limited.

“Heavy state control of the econ’omy is exercised through an extensive layer of state enterprises. The state imposes this control through layers of red tape.

“The government also manages a big chunk of the people’s savings through forced savings and owns 72 per cent of the city state’s land. Moreover, the government controls the unions and most of the labor force. Equally mythical are Singapore’s claims to being transparent. Nothing could be more untrue. The operations of Singapore’s government and bureaucracy are swathed in secrecy.”

King counters claims of high home-ownership levels, saying 86 per cent of Singaporeans rent government flats from the Housing Development Board on 99-year leases.

The author is provocative but very thorough. Every aspect of life in the city-state is analysed in detail.

“Singapore’s flaws are hidden by the PAP state’s vigorous marketing campaign,” he says. And most local and foreign journalists are usually too restricted or intimidated by government defamation laws and other penalties to challenge or refute” the “river of statistics” promoting Singapore’s achievements.

There is a wealth of statistical and anecdotal material in this book to counter the official lines – or lies. Economists and anyone with an interest in Singapore should take note. This book could change the way you view Singapore.

But, perhaps the saddest facet of King’s work is not what he’s written, but the fact that the people who most need to read his book may find it hard to get, if Singaporean bookshops refuse to stock it, as he expects.