Posted by theonlinecitizen on May 2, 2012 (source) 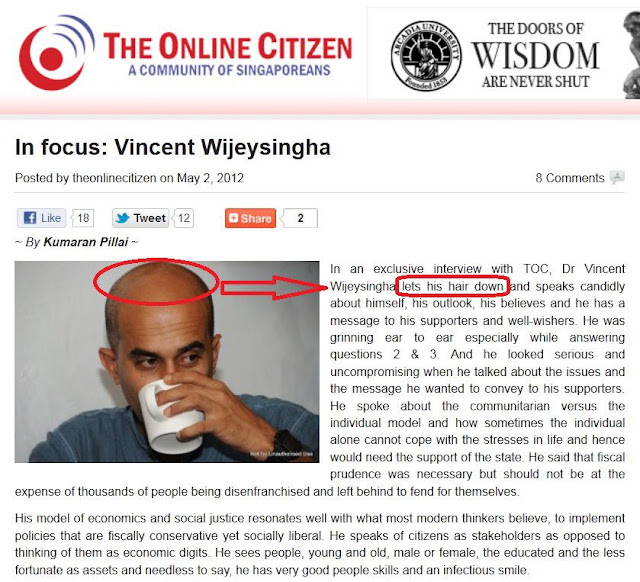 In an exclusive interview with TOC, Dr Vincent Wijeysingha lets his hair down and speaks candidly about himself, his outlook, his believes and he has a message to his supporters and well-wishers. He was grinning ear to ear especially while answering questions 2 & 3. And he looked serious and uncompromising when he talked about the issues and the message he wanted to convey to his supporters. He spoke about the communitarian versus the individual model and how sometimes the individual alone cannot cope with the stresses in life and hence would need the support of the state.

He said that fiscal prudence was necessary but should not be at the expense of thousands of people being disenfranchised and left behind to fend for themselves.

His model of economics and social justice resonates well with what most modern thinkers believe, to implement policies that are fiscally conservative yet socially liberal. He speaks of citizens as stakeholders as opposed to thinking of them as economic digits. He sees people, young and old, male or female, the educated and the less fortunate as assets and needless to say, he has very good people skills and an infectious smile.

But, these are things that we already know about him. So I asked him questions that were rather inquisitive and personal. However, he said he will share his personal journey face to face with anyone who comes by his office. Below are some of his answers and the values he upholds. I have a feeling that I have not asked him all the questions yet. At least for now, that’ll be my excuse for another story another time.

It was getting very hot and sticky at the alfresco café along Bagdad Street and both of us decided to go across the road to have Nasi Padang for lunch. There were few other little things that I learnt about him. He is not fussy about what he eats but enjoys a good meal. But then again, who doesn’t?

He spoke about political marketing and strategy, about old school politics and what is no longer relevant. He said what is necessary is to extend the core values from one segment to new segments of the society. This was a very long discussion and so I’ll leave it at that and shall not dwell on it any further.

After 2 ½ hours of chatting non-stop, we were beginning to be consumed by the fear that there was no end to the topic of politics. So, I decided to return home to pen this down, while Vincent went away to a bookshop to fill his head with more trivia or to be politically correct about it, more information.

Vincent turns 42 today and from all of us at TOC, we wish him a happy birthday!
Posted by Helluo Librorum at 6:00 AM