Saluting the Hougang spirit of undaunted independence against the big bully 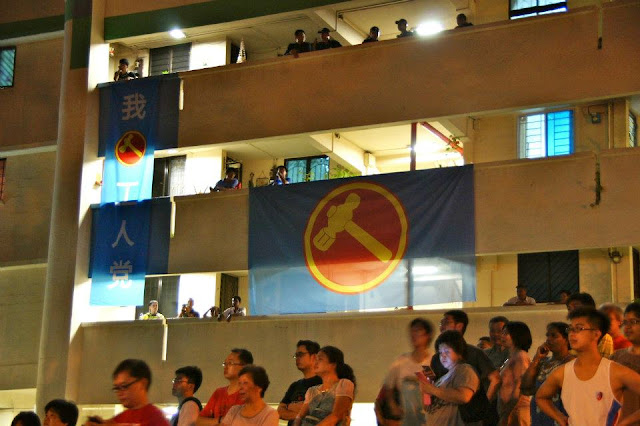 
PAP’s ‘auntie killer’ got ‘killed’ at the polls again


The verdict is out – Png Eng Huat is the new Member of Parliament (MP) for Hougang with 62.09% of the votes. It was a slight dip from 64.8% of the votes for incumbent Yaw Shing Leong last year, but depending on which camp you are from, the dip can be seen as insignificant or significant.


The by-election was the consequence of the Workers’ Party (WP) expelling the Hougang incumbent MP, Yaw Shin Leong due to his failure to account for allegations of his affair with a fellow party member. Some believe that the magnitude of such a scandal may shake the voters’ belief in the WP, and predicted a drop in WP’s share of votes.

Things also did not appear to be rosy at the WP side close to the elections. Sajeev, a former WP candidate resigned from the party close to the elections, and this was followed by Poh Lee Guan, another WP member, receiving a political donations certificate without the party’s knowledge. WP denied it was aware of Poh’s actions and reiterated its stand that Png was its nominated candidate for the Hougang by-election. Based on this sequence of events, observers speculated the possibility of fracture within WP’s ranks.

Hence, the question that interested observers are asking is whether the Yaw episode, Sajeev’s resignation and Poh’s actions had shaken voters’ belief in the WP brand.


With his boyish good looks and charms, even the Financial Times dubbed Choo the “auntie killer”. Choo contested last year and lost with Yaw gaining 64.8% of the votes. His approach to the campaign revolved around appealing to the senior citizens, albeit with a more personalised touch. Choo should not have anything to complain about with regards to his campaign strategies, he wanted it to be straight fight between himself and WP’s Png, and even observers thought he did not expect the help of senior PAP leaders. In fact, if the senior PAP leaders had not entered the fray, Choo could have done better, according to one school of thought.


It all started with Deputy Prime Minister Teo Chee Hean’s bringing up of Png’s ability to be a Non-constituency Member of Parliament (NCMP). If Png is WP’s best candidate, why they didn’t send him into Parliament after Png’s East Coast GRC team was among the wards with the best losing results among the opposition, Teo questioned.

Png clarified that he was against the NCMP post, and that he had taken his name out of the ballot. However, leaked minutes by a person with the moniker “secret squirrel” added more drama to the plot in the sense that Png’s name was indeed in the ballot, but this was refuted by his former East Coast GRC team mate, Eric Tan, who came out to say that Png did tell his party mates that he did not want to be considered for the NCMP post. More tellingly, Tan also mitigated in Png’s favour when he revealed that the former did not want to be sent to Joo Chiat, where the chance of gaining an NCMP position is high.

It turned out that Teo’s allegation is a case of much ado about nothing. A difference in contexts, as a NAR writer eloquently put, especially between an individual one and an organisational one. Png, as an individual wanted to be out of the running for the NCMP position, so it is natural for him to tell the world that he personally took his name out of the ballot process. However, WP, as an organisation will put everyone’s name on the ballot slip, and this is the organisational context.

However, Teo further harped on the issue. People have said that this will count against the PAP, for example, in Aljunied GRC during the 2006 General Elections, when the constant hammering of James Gomez’s error in telling the administrators at the election department that he had filed his nomination forms when he did not in actual fact. Even Png said in a rally that this will not get the PAP any votes.

It was very telling that Teo did not appear to speak on the last day of Choo’s rally. Some speculated the PAP may have sensed that the ground sentiments had grown negative on PAP’s constant hammering of the NCMP’s issue especially via Teo, but we all do not know why Teo was not there on the last day. Speculations remain as speculations, and unverified.


It was obviously going to be a by-election that involves national issues. The speeches of Png’s WP colleagues have touched on those – the foreign talent policy, which in a Bloomberg article where a Chinese national driving a Ferrari was involved in an accident which took the life of a Singaporean cabbie that fuelled anti-foreigner sentiments close to the by-election, Yee Jenn Jong’s speech on scholarships, Gerald Giam’s talk on financing healthcare, other issues brought up during the rallies were the sardine-packing of our public transport during peak hours, the costs of HDB flats, declining birth rates, etc. Thus, the Hougang by-election was also framed as a referendum on the PAP government’s performance.


All the points have been brought up earlier but how would they contribute to a final verdict? WP had some things going against it, the Yaw incident, Sajeev’s resignation, and Poh’s personal accord of obtaining the political donation certificate, all suggesting a fracture in party ranks. All these are speculated to have affected public confidence in the WP.

However, there are shortcomings on the PAP’s side. Teo’s entry into the fray with a constant hammering of the NCMP issue could have generated negative sentiments. Finally, you cannot exclude national issues. It is quite simple. It is never a completely local election. If national issues are affecting voters across the board, both Hougang and beyond, they will obviously poll in favour of a candidate who could provide an extra voice to detrimental policies. It is not that complicated, a basic tenet in Politics 101.

Therefore, it is not only the question of how badly did the shortcomings on the WP side affected them, but it also should be considered along with how badly the PAP’s shortcomings affected the result. It is not simply the result of a single factor that determines outcomes, but those that are connected with the two parties.

What now for WP? The topmost thing on Png’s mind would be to build on the current support. If he serves the residents of Hougang well, the memories of Yaw will be nothing but a distant one. For the PAP, it has to rethink on firstly its current policies, and secondly, its electoral strategies. Questioning integrity of candidates will not cut it, and in terms of policies debate, it has to start offering real solutions. That is what people want to see, instead of a long talk on why so and so has questionable integrity or abilities.

However, be that as it may, the final results still stand, PAP’s auntie killer was ‘killed’ a second time at the polls.

It would take all the propagandizing efforts by the mainstream media to portray the Hougang by-election as anything less than a bloody nose for the People’s Action Party (PAP).

None of the factors that conventional wisdom would expect to favour the PAP helped them in the least: a very public resignation by the WP incumbent (Yaw Shin Leong), the last minute possibility that a WP veteran might split the vote (Dr Poh Lee Guan), and rumours of internal party fractures over race (Sajeev Kamalasanan).

On the PAP’s side, no effort was spared in the attempt to take Hougang back: free porridge, free legal clinics, free hearing aids and loving mainstream media coverage portraying Desmond Choo as every Hougang mother’s favourite son and an untiringly youthful sportsman.

After all of the above, plus overwhelmingly favourable coverage in the mainstream press, all the PAP won was an additional 145 votes.

As we predicted, NCMPgate made hardly a dent in the Workers’ Party (WP) winning margin in Hougang.

In fact, the opposite is probably true. One can only surmise that the headlines alleging dishonesty might very well have put voters off the PAP’s negative campaigning.

What probably rankled most was the hypocrisy: Desmond Choo’s promise to wage a gentlemanly campaign was hijacked midstream by a sledgehammer attack from Deputy Prime Minister (DPM) Teo Chee Hean.

For middle-ground voters who could have been persuaded that Desmond Choo would be an “independent” voice in Parliament, all doubts of independence were put to rest by DPM Teo’s intervention.

As many Singaporeans asked, if Desmond can’t stand up to his party bosses in the campaign, how is he going to stand up to them in Parliament?

To give credit where it is due, Mr Choo has run an impressive campaign for Hougang.

At a youthful 33 years of age, Mr Choo unflinchingly took on decades of Hougang history where even more seasoned politicians would have blanched. The energetic Mr Choo has certainly been an improvement from the forgettable (indeed, now very much forgotten) Eric Low.

Mr Choo’s campaign had much to commend it, but he must surely be rueing the day his party bosses put their foot in it.

The message Hougang voters have sent out loud and clear is this: voters of today don’t appreciate the bullying, lecturing, and phoney moralizing of the old PAP.

Pritam Singh probably nailed it when he warned the PAP: “those in glass houses shouldn’t throw stones”. The PAP would do well to bear this in mind for 2016.

For now, TOC would like to convey our best wishes to the Member of Parliament elect for Hougang SMC, Mr Png Eng Huat.
Posted by Helluo Librorum at 7:25 AM