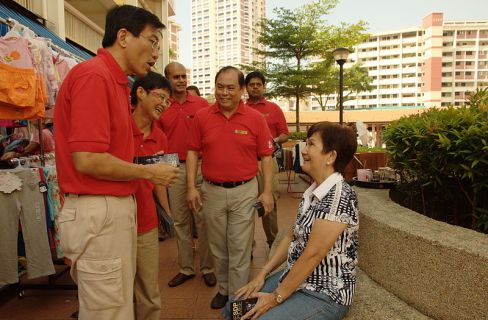 Unbeknownst to many, Chia Thye Poh of Singapore was the longest-serving political prisoner of the 20th century. A teacher and a socialist member of parliament, he was detained in 1966 under the Internal Security Act for allegedly conducting pro-communist activities, and imprisoned for 32 years–14 years longer than Nelson Mandela's incarceration on Robben Island.

The Internal Security Act allows the government of Singapore to imprison citizens indefinitely and without trial. Elected opposition members of parliament, journalists, and trade unionists have been detained under this Act over the last half-century of one-party rule. Chia Thye Poh was detained for 23 years without facing charges or standing trial.

In 2009, the government of Singapore further increased its repressive capacity by amending a Public Order Act to outlaw any individual from conducting any kind of protest.

I have myself been imprisoned on more than ten occasions for exercising my right to freedom of speech. Two former prime ministers—Mr Lee Kuan Yew and Mr Goh Chok Tong, as well as the current prime minister Mr Lee Hsien Loong, Lee Kuan Yew's son—have repeatedly sued me for defamation over remarks about governance. The courts have ordered me to pay them a total of more than one million dollars in damages. I am now bankrupt. Because of my bankruptcy I have been prohibited from standing for elections and barred from traveling overseas.

The myth about Singapore is that economic growth can take place in an authoritarian state unhindered. After all, Singapore's GDP figures have grown by leaps and bounds.

Herein lay the untruths. And untruths, repeated often and long enough, develop into veritable myths. And the myth goes something like this: Singaporeans have grown rich and are therefore content to let the government rule without regard for their human rights and civil liberties.

But the silence you hear from our island in Southeast Asia is not the sleepiness that comes with being content, it is the silence that accompanies fear. Through decades of defamation lawsuits, criminal prosecution and detention without trial, the government has extinguished any dissenting voices.

But are Singaporeans not well-off? Some obviously are:

The number of millionaires in Singapore has grown at an astounding rate. In 2010, Singapore registered the greatest proportion of millionaire households in the world, yet the poorest 20 percent of the population has seen their incomes stagnate for the past 10 years.

Singapore's gini coefficient, which measures income inequality, is at about the same level as "Third World” countries like Cambodia, Guyana, and Kenya.

There are no unions, there is no minimum wage, and workers—both local and foreign—are routinely exploited. It is common to see the elderly people in their 70s and 80s cleaning tables and washing public toilets just so that they can feed themselves. The number of homeless sleeping on sidewalks and camped out on parks and beaches are increasing.

A consequence of the socio-political situation is that Singaporeans are emigrating in numbers that have alarmed the country's rulers. Every month, about 1,000 Singaporeans seek permanent residence in other countries. This is significant given that we have a population of a little more than 3 million. In one survey 50 percent of younger Singaporeans say that would like to immigrate to another country if given the chance.

With only 1.2 births per person, Singapore is the least fertile country in the world. The population is shrinking to levels that threaten the economy.

Despite all this, Singapore has gotten fabulously rich. How is that possible?

The International Press Service has reported that while Singapore promotes itself as a regional financial center, a former chief economic analyst at Morgan Stanley, says that much of funds pouring in are illicit and being laundered in Singapore.

The question is whether or not such a political-economic arrangement is sustainable. Seeing the situation that is developing across the world with people rising up against income inequality and exploitation, it would take someone whom is very foolhardy to bet on the Singapore government continuing its ways indefinitely.

But without the rule of law, without a free media, and without the right to free expression and peaceful assembly, the coerced people of Singapore have no say in how the country is run nor in the direction in which it is headed.

Human rights defenders must continue to work to bring the system in line with international norms and in accordance with principles enshrined in the Universal Declaration of Human Rights. Specifically, the government must: abolish the Internal Security Act; stop using defamation suits to stifle dissent; return Singaporeans their right to the fundamental freedoms of speech and assembly; and ensure that the media operate free from government control.

I have been invited to give a speech this year at the Oslo Freedom Forum, taking place from May 7th to May 9th, and I hope to be able to join the many distinguished guests. I am, however, not hopeful, as the Singapore government continues to ban me from traveling overseas.

Dr. Chee Soon Juan is currently the leader of the Singapore Democratic Party.
Posted by Helluo Librorum at 4:17 PM