Chen Show Mao: Political service is a calling, should not be a discount factor 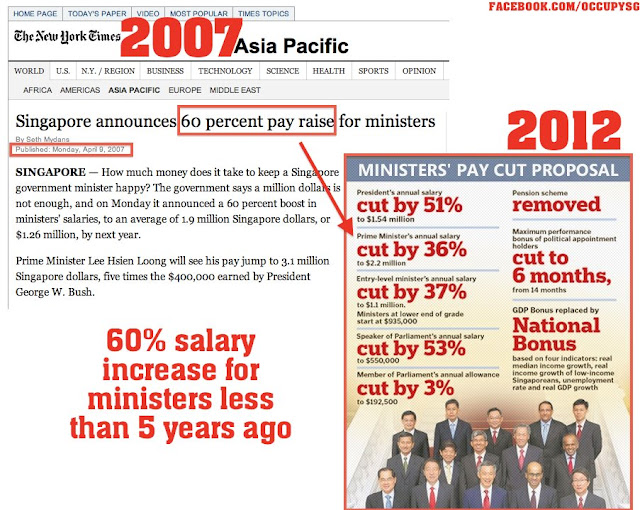 The Workers’ Party view the committee’s report with a sense of hope because it is a step in the right direction. We agree with the three principles that political salaries should be competitive, that political service is a calling and has its own ethos, and that wages should be transparent.

However, the order by which the principles are applied has produced in our view a flawed new benchmark. Because competitive salary is placed as the first principle ahead of political service, the committee has pegged ministerial salary to the median salary of the 1000 top-earning Singaporeans and then applied a discount for political service.

If the new benchmark is accepted by the Government, it would continue to send the message, to potential political office holders and the people of Singapore alike, that top pay is the benchmark by which the importance of the office is to be judged, and that the value of political office can, in the final analysis, be monetized. It cannot be, not even at the highest income levels. Political service is a calling; it is a privilege accorded by the electorate to serve the largest number of our fellow Singaporeans. It is primarily a privilege, not primarily a burden or sacrifice. The principle of political service should come first and not be treated as a discount factor.

Because political service is in the genre of public service, we propose a whole-of-government, people-up approach that benchmarks Ministerial salary to MP allowance, which is in turn pegged to the pay of the civil service bench-marked to general wage levels. Because political service starts with our election as parliamentary representatives of the people, MP allowance should be the starting point. The Cabinet is the constitutional extension of Parliament and the institutional expression of the legislature’s control over the executive. It is not an extension of the private sector.

This whole-of-government, people-up approach is a pragmatic reality in many well-governed, developed countries and territories around the world.

Is Singapore unique? Of course. But it is not so dissimilar to others that we cannot learn from their best practices and how they apply good principles.

For example, the committee writes, “As is international practice in Westminster Parliamentary systems, the … political appointment holders will also receive MP allowances as they have the dual roles of being MPs”.

We agree that the Ministers should receive their MP allowances. But that is because, Ministers are MPs first, they are not merely also MPs. We must remember that in our system of government, Ministers are first of all MPs elected by the people as their representatives. Not selected by the Prime Minister from the private sector into the Cabinet and then also MPs. Parliament is the highest authority in our system of government, and MPs, as elected representatives of the people, should be the starting point for the determination of ministerial salary. The committee’s benchmark to the private sector clouds this fact. Worker’s Party recommends pegging ministerial salary as multiples of MP allowance. This expresses the fact that ministers are first and foremost elected as MPs to serve and represent the people.

So in what multiples should Singapore peg ministerial salary to MP allowance? We propose that an entry-grade minister’s monthly salary be 5 times the MP allowance, and 9 times for the Prime Minister.

As DPM said, there are no right or wrong answers, and this is ultimately a judgment call. We propose multiples based on the increased responsibilities and additional capabilities and experience required of the different political offices in Singapore. We also believe that this is where the principles of competitive salary and transparency can come in, to take into consideration some of the factors cited by the committee as to why the system of Singapore may be different from those in other countries. In the words of DPM, we believe the pay should be sufficient to not deter potential political office holders with desire and ability, from serving in political office without undue concern for their standards of living.

Of course we would like to see capable men and women in the Cabinet. But I do not believe that our best people for political office are only those who make the most money. Many of our former and current Ministers did not come in from the private sector or the top earning professions, that is as we would expect. Many of them were public servants who heeded the call of political service by standing for elections.

Political service is in the nature of public service. We believe that MP allowance should be set with reference to the salary of senior executives in the regular civil service. This is consistent with the general practice in most of the countries and territories we surveyed.

The starting salary of entry-grade senior civil servants in the regular civil service — a director of MX9 grade in the Management Executive Scheme of the civil service (outside of the Administrative Service) is approximately $11,000 a month.

In our whole-of-government approach, since civil service salary is aligned to general market conditions faced by Singaporean workers, MP allowance and ministerial salary will move with the income levels of many more Singaporeans than with the total employment and trade income of the top-earning 1000, including their bonuses, commissions and stock options. The Workers’ Party’s benchmark will better help our leaders empathize with the majority of Singaporeans and not just the very few.

The Workers’ Party’s proposed approach aims for enhanced inclusivity and sensitivity to the progress of Singaporeans, rather than discounted exclusivity pegged to top earners. We believe the committee has taken the right step forward with the three principles. It is up to the Government now to go further to apply the principles in the right order by recognizing political service as the first principle, anchored in the primacy of parliament. Let us place ministerial pay on a sound footing in order to ground political leadership in a strong sense of service to all Singaporeans.

Thank you. And now, if I may, in Chinese.