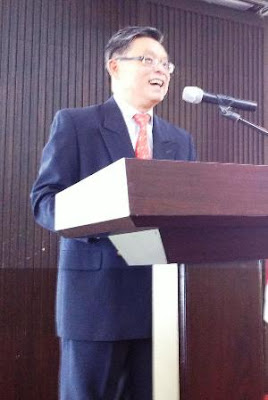 (source1, source2)
The following is the transcript of a speech by Tan Jee Say at the Thank-You Lunch for Volunteer Helpers of TJS Presidential Campaign 2011 on Sunday 25 September 2011:

Thank you very much for coming to this lunch gathering to allow me to thank all of you for helping me in my recent Presidential Campaign.

Many of you had also helped me in the General Election held a few months earlier. Some even stood with me as fellow candidates in the GE. You have been wonderful and unstinting in your support. I would not have done as well as I did without your help. You have made all the difference in transforming a little-known political newbie into a national figure with command of a quarter of the national vote, all in the short span of four months and against senior experienced politicians who have been in the public eye for more than 25 to 35 years.

Some commentators tried to diminish your contribution by ascribing our showing as a hardcore opposition vote. You know which camp they probably come from. An assenter to Dr Tony Tan’s nomination, a good friend of mine no doubt, even described me as a much-hyped opposition. Do we detect more than a tinge of envy in their camp? Even in victory, they were not gracious. It is hardly a good start to a dignified Presidency whose declared intention is to unify a divided nation. Of course, we can understand their frustration and humiliation at the tiny margin of victory despite all the high-level endorsement and never-ending publicity. Seen in this light, our share of the national vote is a phenomenon, not a hype. The internet helped but it took more than on-line chat to bring about this phenomenon. It was your hardwork, dedication and imagination that fascinated and captivated more than half a million Singaporeans to cast their sacred vote for me. For this great and selfless effort of yours, I am eternally grateful.


A Vote for Diversity

I am glad that I had offered myself as a candidate in the Presidential Election. I believe I have contributed to a more robust debate about the role of the President and other national issues, and consequently helped Singaporeans understand these matters better. My candidature had also added to the diversity of choice for voters and made them think carefully about the issues and the candidates before them. Singaporeans were offered diversity and they responded with an overwhelming vote for diversity.

The first and foremost conclusion is that 65%, the vast majority Singaporeans, are not happy with the Government. They have resoundingly rejected the moral authority of key PAP and PAP-backed leaders in Government, the trade unions, clan associations and chambers of commerce, ignored the leadership’s endorsement of its preferred candidate and given their carefully considered votes to the others. Never has our nation seen such a clear and outright show of disapproval. The PAP leadership is in crisis. However much party leaders might deny in public, the party is split right through the middle. It is not just about the division between the elite on the one hand and the grassroots on the other. Even among many of their former Ministers and Members of Parliament, there is serious misgiving about the direction that the Government is embarking upon in its economic, political and social policies. They feel strongly that the Government has deviated from the original ideology of the PAP which had always put people first in everything that they did in the past. Alas, this is no longer so. The current leaders in their ivory towers are increasinlgy disengaged and insulated from their members. This is consistent with their elitist stance towards ordinary Singaporeans, with their tens of millions of dollars in salaries and pensions, good-class bungalows and elite lifestyles. A similar division is occurring in its affiliate and supporting organisations. The leaders can no longer muster the support of the rank and file and galvanise them to go to battle. They are like army generals who commanded their soldiers to charge forward but discovered on turning round that the soldiers were not following them.


All these signs point to a serious leadership vacuum in Singapore today. The world has changed, society takes on new perspectives. Singaporeans particularly the young cry out for new ideas to take Singapore forward. Yet the PAP is stuck in its old ways. Before the PE, Dr Tony Tan spoke about the “new normal” in politics after the GE. But his first act after being elected President was to prove that nothing has changed, by re-appointing the previous chairman of the Presidential Council of Advisers. Similarly, following pressure from the last GE, some unpopular ministers were dropped from Cabinet, but PM missed one of them so much that he re-hired him to be his adviser on economic cooperation with China. Is Singapore so short of leadership talent that even leaders who have questionable talents have to be recycled for use? Or is it more a case of lack of confidence in trying out something new and different? How can a new generation of leaders be nurtured if the old continued to be re-used over and over again?

PM said he welcomes new ideas and views. But he missed his chance of showing original thinking and setting himself apart from the old when he failed to translate his 1991 statement on the Internal Security Act into reality; he had said he would seriously consider abolishing it if Malaysia were to do the same. While Malaysia has announced it will abolish the ISA, Singapore wants to keep it. By retaining the ISA, PM showed his diffidence as he hangs on to the Government’s main instrument of fear. If he cannot keep his promise on such a fundamental issue, what can we expect from the promises that he has made during and after the May General Election? Will he prove to be just another man of promises rather than a promising Prime Minister?

The Government is seriously short of new ideas and new leaders. Nature abhors a vacuum. The leadership vacuum has to be filled. A non-PAP Government is in sight. But much needs to be done to achieve it. We must understand what Singaporeans are telling us with their vote. The PE vote has shown that Singaporeans want a diversity of choice.

They have signalled that they want an end to a single dominant party that has been a distinctive feature of Singapore’s politics in the last 50 years.

Diversity of views is the hallmark of a mature and developed society. Society and choices in life are simply not cast in just black and white. There is a multitude of colours in between. Different people have different circumstances in life and accordingly make different choices to suit their circumstances or beliefs. Singapore society is maturing and we want our diverse views to be respected and represented, not trampled upon or subordinated to others. These diverse views cannot be adequately represented by a single political party. In the PE, Singaporeans have shown their preference for three large distinct blocs of opinion. During the May GE, one PAP minister derided the notion of diversity among opposition parties and described it as rojak. I responded by saying that rojak was delicious; it was Singapore’s favourite national dish and we should not be ashamed or even make fun of it. Diverse views coming together in a coalition government will be far more representative of the diverse groups of people in society. To be a stable government, the partners in the coalition will need to accommodate each other’s interests and concerns and as a result will become a broad-based government that will take care of the interests of all partners and their supporters.

Singaporeans should not fear but must be prepared for the eventuality of a coalition government. Like-minded individuals and political parties in the opposition will need to get together more often and build themselves into a cohesive and potent force. We should also reach out to members and supporters of the PAP who are disillusioned with their current party leadership and want to continue contributing to Singapore in a meaningful way. Together with them, we can forge a powerful combined majority to serve Singapore. In the next few years, I will dedicate my effort to building up this broad coalition of forces and strengthening our ranks with many more talented Singaporeans who have the passion to serve Singapore. We must work towards being in a position to offer ourselves as a credible alternative government in the next GE. It is our duty to do so. We owe it to the people of Singapore to fill the leadership vacuum.

A Book to Inspire

We live in exciting times. We have reached a critical turning point in our political history. We, you and me, have been a part of this process that stretched over the last two elections. We should write a book about our journey so that it can serve as an inspiration for future generations of Singaporeans. I have discussed this with some of the principal players and they all supported the idea. It is too good an opportunity to be missed. Few nations if any, have ever held two nation-wide elections in a span of four months. Fewer still are key players who took part in both. The book will be the story of extraordinary men and women who fought Singapore ‘s 2011 General Election in May and the Presidential Election in August. Together with their loyal and dedicated supporters, they displayed great courage and conviction, and in so doing changed the political landscape forever. It will be an inspirational book that provides an analysis of the GE and PE with a focus on the themes of Maturity and Courage, and what these 2 elections and the response of Singaporeans portend for the future of Singapore. It is a book written by players, not bystanders. Each player describes a personal journey in his or her own perspective. The book aims to inspire, inform and acknowledge Singaporeans for their role in positively changing the political landscape of Singapore and helping her move towards a more mature democracy. We target to launch the book before Christmas.

We have a long and exciting road ahead. We must engage our supporters and the community on a continuing basis. In addition to the book, a group of us plan to organise a number of community outreach activities such as forum discussions, tuition centres, care-centres for children, the elderly and people with special needs, and legal and medical clinics for the poor. These activities need resources and volunteers. We are working out the plans now and will share them with you soon.

Meanwhile, please enjoy the rest of the lunch and the camaraderie of your friends and fellow travellers.

Once again, thank you for all your support in my Presidential campaign. I hope to see you again in the months and years ahead as we work together for a better Singapore for all Singaporeans.
Posted by Helluo Librorum at 6:56 PM