A great Tang Dynasty poem composed by Li Bai in AD 752 when he was 51.

What else happened at that time? The Abbasid Caliphate was founded in AD 750, and defeated the Tang forces in the battle of Talas in AD 751. This battle was crucial in deciding the border between the Sinic and the Islamic civilizations, and the limits of the Sinic civilization.

Charles Martel halted the advance of Islam into Europe by defeating the forces of the Umayyad Caliphate in the Battle of Poitiers on October 10, 732. This battle was also crucial in determining the boundary between the Christian and the Islamic civilizations.


I probably first came across the poem in 1970. Forty years on, I am now older than the poet when he composed it.

Indeed this is a poem for the ages -- an everlasting literary masterpiece. In essence:

Cogito ergo sum (I think, therefore I am) -- Descarte 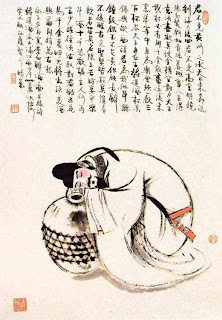 Posted by Helluo Librorum at 11:44 AM