In 1974, there had been 23 Oxonian British PMs, besides numerous other eminent Oxonians.

And there were at least three future PMs amongst the Oxonians of 1974-77: Tony Blair, Benazir Bhutto, and Theresa May.

On the Oxford romance of Theresa and Philip May: here

Dominic Grieve (born May 24, 1956), Attorney General for England and Wales and Advocate General for Northern Ireland from May 2010 to July 2014, read Modern History at Magdalen College, graduating in 1978.

Kim Beazley (born December 14, 1948), Deputy PM of Australia (June 1995 - March 1996) and Australia's Labor Party Leader (1996-2001, 2005-2006), earned a Bachelor’s and Master’s of Arts degrees at the University of Western Australia and was awarded the Rhodes Scholarship in 1973. He completed a Master’s of Philosophy at Balliol College, Oxford, writing his thesis on Soviet and American naval competition in the Indian Ocean.  (source)

Peter Millican (born March 1, 1958), philosopher at Hertford College, Oxford, read for his BA and BPhil at Lincoln College, Oxford 1976-1982. His lectures on General Philosophy can be seen here.


Alan Hollinghurst (born 26 May 1954), the notable novelist and winner of the 2004 Man Booker Prize (see The Observer profile), read English at Magdalen College from 1972 to 1979, graduating with BA in 1975, and MLitt in 1979. (The friendship of Andrew Motion, Alan Hollinghurst, Stephen Pickles and Hugh Grant is described in "Iris Murdoch as I knew her", by A.N. Wilson.)

Vikram Seth (born June 20, 1952, Calcutta, India), Indian poet, novelist, and travel writer, is well known for his verse novel The Golden Gate (1986) and his epic novel A Suitable Boy (1993).
The son of a judge and a businessman, Seth was raised in London and India. He attended exclusive Indian schools and entered Corpus Christi College, Oxford to read English (which he later changed to Philosophy, Politics and Economics) in 1971, graduating with a BA in 1975, having taken the year 1973-74 off in India. He received a master’s degree in economics from Stanford University in 1978 and later studied at Nanking (China) University. In 1987 he returned to India to live with his family in New Delhi. (source)

Pico Iyer. travel writer and essayist, was probably at Oxford from the autumn of 1976, according to his birth year (1957).

Pico Iyer was born in Oxford, England, to parents from India, in 1957, grew up in California and currently lives in Japan. He won a King's Scholarship to Eton and then a Demyship to  Magdalen College, Oxford, where, graduating with a Congratulatory Double First in English, he received the highest marks of any student in the university. He went on to acquire a second Master's degree in literature at Harvard, where he taught literature and writing for two years. (source)


David Profumo (born Oct 20, 1955), novelist and son of John Profumo (the disgraced Secretary of State for War in the Macmillan government (The Profumo Affair)), read English at Magdalen College in 1974-77, graduating with a First.


Peter Tasker (bio),  Japan watcher, author of Inside Japan (1987) and Japan in Play (1999), and financial expert, read English Literature, then Law, at Balliol College, beginning in 1973.

Rowan Atkinson (born January 6, 1955), the renowned Mr Bean and Blackadder, graduated with a BSc from Newcastle University (UK). He then entered The Queen's College, Oxford in 1975 to read Electrical Engineering, graduating with a MSc in Electrical Engineering in 1979. Mr Bean was conceived in Oxford. 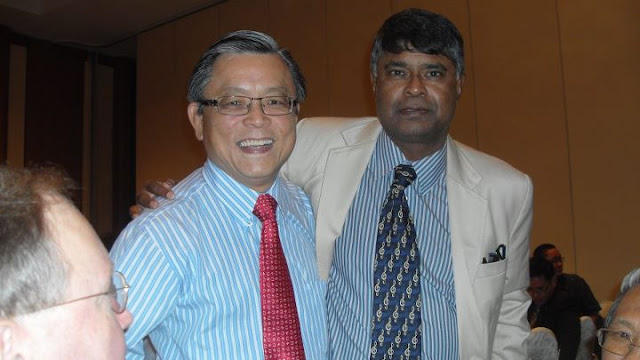 Tan Jee Say, and Professor Rajiva Wijesinha, Chairman of the Council of Asian Liberals and Democrats, on 3 Nov 2011


Rajiva Wijesinha (born May 16, 1954), MA(Oxon), DPhil (Oxon),  is a Sri Lankan writer in English, distinguished for his political analysis as well as creative and critical work. An academic by profession for much of his working career, he was most recently Senior Professor of Languages at the University of Sabaragamuwa, Sri Lanka.

He belongs to the Liberal Party of Sri Lanka, and has served as its President and Leader, and also as a Vice-President of Liberal International. He is currently Chair of the Council of Asian Liberals and Democrats.

He read Classics as an undergraduate at University College (1970-74), and English Literature as a graduate student at Corpus Christi.

Ferdinand "Bongbong" R. Marcos, Jr. (born September 13, 1957), widely known as Bongbong Marcos, is a Filipino politician and senator in the 16th Congress of the Philippines. He is the second child and only son of Ferdinand E. Marcos, the former president of the Philippines(1965–1986), and former First Lady Imelda R. Marcos. He read PPE (Philosophy, Politics and Economics) at St Edmund Hall in 1975-78 (here).

Posted by Helluo Librorum at 8:25 AM