No Man in an Island: James Minchin talks with Vincent Wijeysingha (video)


In this episode of Let's Talk, hosted by Dr Vincent Wijeysingha, we discuss the historical aspects of Singapore's politics with the Reverend Father James Minchin, author of "No Man is an Island: A Study of Singapore's Lee Kuan Yew" (1990).

The Reverend James Minchin, an author and Anglican priest, has been barred from entering Singapore. He was turned back at Changi Airport when he arrived on a visit from Melbourne. No reason was given.

He was held at the airport on Wednesday (Nov 7, 2012) evening for nearly 24 hours, and subsequently escorted by the police to the plane for his flight back to Melbourne the following night.

Father Minchin was recently interviewed on the SDP's talkshow, Let's Talk, when he discussed his book No Man Is An Island - A Study of Singapore's Lee Kuan Yew's Singapore, which was published in 1987.

He has been a regular visitor to Singapore and a long-time observer of its social and political developments. As he describes in his Let's Talk interview, he started visiting Singapore in the 1960s and even served for a time as Pastor of St George's Church, Minden Road.

Given that Fr Minchin has never faced any problems entering Singapore, this recent prohibition may well be attributed to his interview on Let's Talk. If so, this move on the part of the Government is petty and small-minded. Does the PAP want to punish Fr Minchin for appearing on the SDP programme.

No doubt, the charge will be laid that by appearing on the show, Fr Minchin, who is an Australian citizen, is "interfering" in Singapore's politics.

But in this interdependent and interconnected age, does it achieve anything for the PAP Government to stop non-Singaporeans from commenting on Singaporean issues?

Is the Government so thin-skinned that it seeks revenge on individuals who express their honest opinions on Singapore? Does not the Government regularly invite non-Singaporeans to speak at public events which are then reported by the media?
If we aspire to be a global city, let us be confident in our own ability to think for ourselves and discern what is good and bad for our country - regardless of whether they are expressed by Singaporeans or non-Singaporeans.

In the past, the Government has barred other visitors from Singapore. Most recently, Mr Robert Amsterdam, SDP's international lawyer, was turned back at the airport when he tried to visit Dr Chee Soon Juan. Mr Amsterdam had published a White Paper on Singapore in which he highlighted the lack of the rule of law in Singapore and detailed the legal actions taken against the SDP secretary-general.

The Home Affairs Ministry must come clean on its decision to bar Fr Minchin from entering Singapore. 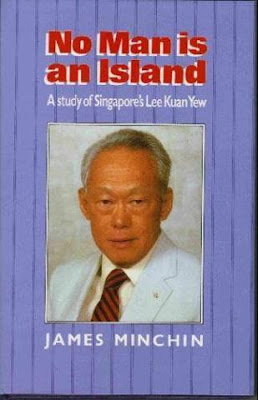 Posted by Helluo Librorum at 6:11 AM