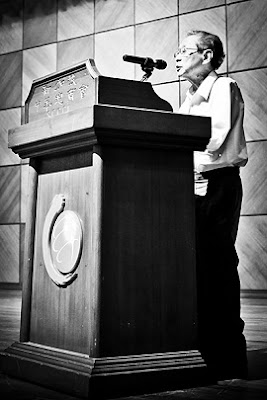 Malaysia’s proposed abolition of its Internal Security Act (ISA) has, unsurprisingly, cast the spotlight on Singapore’s own security laws. In recent times, former ISA detainees on the island have made calls for the law to be abolished. These include those who were jailed under the Act in the 50s, 60s, 70s, and 80s. For more than 50 years, the ISA has been the Sword of Damocles which still hangs over Singaporeans like dark clouds over the island.

Until very recently, no one really knew how many were detained over the decades, and could only indulge in speculation. In October this year, however, the government finally disclosed the numbers – well, not entirely. “More than 800 people were arrested under the ISA in the 1970s of whom 235 were issued with Orders of Detention,” Deputy Prime Minister and Minister for Home Affairs, Teo Chee Hean, told Parliament. (See here.) He did not reveal the exact number of people who have been detained under the Act since Singapore’s independence.


One of those who were served with detention orders is Dr Lim Hock Siew. Arrested in 1963’s infamous Operation Coldstore, Dr Lim was only 32 years old when he was jailed – without having been charged or given a trial in open court. More than 100 activists were arrested, Dr Lim among them. He was released in 1981 after 20 years in jail, making him the second-longest serving ISA detainee in Singapore’s history, after Mr Chia Thye Poh who served a total of 32 years.

Dr Lim has, especially in the last few years, been more prominent and vocal in speaking about his time in detention and the events leading up to his arrest in February 1963. On Tuesday, 25 October, he addressed an audience of about 40 people at a closed-door session. The forum was organised by Function 8, a name which, the group says on its website, “represents our hope that, just like the F8 key in computers resets a computer to ‘safe’ and basic mode for troubleshooting, we can also reflect over the basics of what makes societies strong, just and meaningful and the role of democratic processes in achieving those goals.”

As Dr Lim took the seat at the front of the room, he looked more frail than on previous occasions. Originally scheduled to take place a week earlier, the forum was postponed because Dr Lim had taken ill. His memory, however, does not escape him. As he related the story of his arrest in his soft-spoken manner, it is evident that the long years of incarceration have not dented his spirit. “I am a socialist,” he said, rejecting the government’s labelling of him otherwise.

Although Dr Lim has steadfastly held on to his ideological principles all these years – refusing to compromise his beliefs even through 19 years of incredible psychological pressure during his incarceration – he was emphatic about the fact that at the time, the Barisan Socialis was not a subversive communist front organisation and had no intention of joining with the communists to instigate violence and disorder, contrary to what were stated as reasons for the arrests. (Recently declassified British and Australian intelligence files support Dr Lim’s statement.) According to its ex-leaders, the Barisan was a legal political party and was struggling for independence through peaceful constitutional means. That meant going through the electoral process, and as the strongest political force in Singapore at the time (one of its rallies managed to attract 100,000 people), it was expected to win in any free and fair election (The Fajar Generation, pg. 171).

In fact, according to Dr Lim, by the latter half of 1962 the Barisan Socialis was busy preparing for the impending Legislative Assembly elections in 1963 and had no intention of becoming distracted or diverting its energies elsewhere – which is why it had encouraged trade unions not to hold strikes during that period. Hence, the claim that those arrested “were involved in a giant communist conspiracy to launch supporting action in the event of armed intervention by Indonesia in British Borneo” (The Straits Times, 3 February 1963) did not make sense.

I kissed my wife goodbye and...

A Q&A session followed Dr Lim’s recounting of the historical circumstances surrounding the Operation Coldstore arrests. The audience was clearly curious about the personal stories behind the published accounts. “What happened on the night of the arrests?” asked one audience member. “Did you know you were going to be put away for so long?”

Dr Lim replied that the leaders of the Barisan had already known about the impending arrests and were waiting at home for the knock on the door. When the police came to take him away, he turned to kiss his wife goodbye and said to her, “See you in 8 years’ time.” The longest a political prisoner had been held up to that point was 8 years.


“How did you manage to keep sane through all those years?” someone else asked. “Well, after the first 10 years, I sat down and made another 10-year plan,” Dr Lim deadpanned. The laughter that followed was tinged with some degree of fascinated awe. Indeed, one of the most psychologically agonising aspects of detention without trial is not having any idea when you are going to be released, or indeed if you would be released at all. A huge degree of mental strength and fortitude is needed to stave off despair and depression, and for Dr Lim, he found that strength through holding fast to his principles and beliefs. “It is about conviction,” he said simply.

“I am not interested in saving Lee Kuan Yew’s face.”

It was this conviction that led him to publish on 18 March 1972 - nine years into his incarceration - a political statement from prison. The statement was issued in response to an offer by two “high-ranking employees” from the special branch to release him if he would issue a public statement of repentance. A part of his statement was read out at the forum:


Special Branch: You must concede something so that Lee Kuan Yew would be in a position to explain to the public why you had been detained so long. Mr Lee Kuan Yew must also preserve his face. If you were to be released unconditionally, he will lose face.

Dr Lim Hock Siew: I am not interested in saving Lee Kuan Yew’s face. This is not a question of pride but of principle. My detention is completely unjustifiable and I will not lift a single finger to help Lee Kuan Yew to justify the unjustifiable. In the light of what you say, is it not very clear that I have lost my freedom all these long and bitter years just to save Lee Kuan Yew’s face? Therefore the PAP regime’s allegation that I am a security risk is a sham cover and a facade to detain me unjustifiably for over nine years.

Finally, when asked for his opinion of why Singapore has resolved to retain the ISA, Dr Lim said that if he had to make a guess, the ISA is something that the PAP has decided to “keep in its back pocket” – to be used if the threat of its losing power becomes imminent. The instigation of a riot or disturbance might be all the excuse needed to invoke the use of the ISA.

At 80-years old, Dr Lim still practises his profession at the Rakyat Clinic in Balestier Road, which he had set up with Dr Poh Soo Kai, another former detainee, in 1961. As a general practitioner, he continues to see needy patients and charges reduced rates to the poor, dispensing with fees altogether for his poorest patients.

In this and other aspects of his life, Dr Lim lives and breathes his socialist ideology. After all, it is about conviction – the conviction that has sustained his spirit through some of the most tumultuous times in Singapore’s history.