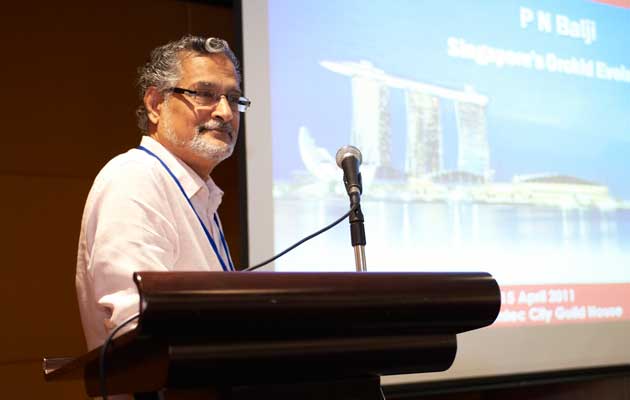 
While I applaud PN Balji (see below for all relevant news and his bio) for questioning the conduct of Singapore's Attorney-General's Chamber (regardless of the merit of his case), he certainly should have declared his financial interest, being a PR consultant for the immensely expensive Dr Susan Lim, in the judiciary's decision concerning Singapore Medical Council vs. Susan Lim.

Being a veteran journalist, he surely understands conflict of interest (the very issue that he raised concerning the actions of Singapore's Director of Medical Services): that posing as an independent commentator, while advancing one's personal gain, is deceitful and unethical.

He should promptly apologize for his deception, to salvage his credibility.


Presumably he has used his close association with The Straits Times, The New Paper, Today, SPH, Channel News Asia, and MediaCorp to promote favourable coverage and views of Susan Lim (which is what he has been paid to do, after all).

How much success did he have?  Did he declare his personal financial interest to those editors and journalists whom he sought to influence?

The above policy serves as a sound ethical standard for journalists, columnists and commentators. The following extracts are pertinent:

40. It is an inherent conflict for a journalist to perform public relations work, paid or unpaid. Staff members may not counsel individuals or organizations on how to deal successfully with the news media. They may not, for example, advise candidates for public office, write or edit annual reports, or contribute to the programs of sports teams.

136. Our audience applies exacting standards to all of our journalism. It does not normally distinguish between the work of staff members and that of outside freelancers. Thus as far as possible, freelance contributors to the Times Company's journalism, while not its employees, should accept the same ethical standards as staff members as a condition of their assignments for us. If they violate these standards, they should be denied further assignments.

137. Before being given an assignment, freelance contributors must sign a contract with the Times Company or one of its units. Such a contract obliges them to take care to avoid conflicts of interests or the appearance of conflict. Specifically, in connection with their work for us, freelancers will not accept free transportation, free lodging, gifts, junkets, commissions or assignments from current or potential news sources. ...

THE Attorney-General's Chambers (AGC) on Tuesday said it disagreed with an Indonesian newspaper article on the disciplinary proceedings against Dr Susan Lim.

The Jakarta Globe column was written by Mr P.N. Balji [also a consultant to The Jakarta Post]. But it failed to mention that he acted as a public relations consultant for the surgeon accused of overcharging a royal patient from Brunei.

It said that 'a seemingly straightforward case of a private fee agreement... has thrown open serious issues of conflict of interest, prejudging by a medical tribunal against a doctor and re-writing rules midway through the disciplinary inquiry process'.

A day later, High Court judge Philip Pillai dismissed Dr Lim's application for a judicial review, in which she had argued that the Singapore Medical Council (SMC) was biased against her.

Yesterday, in response to questions from The Straits Times, the AGC said it disagreed with Mr Balji's views. 'The judgment of Justice Pillai speaks for itself and he has found that all the allegations that were made by Dr Susan Lim were of no merit,' said a spokesman.

Singapore. Beyond the sensational headlines and some below-the-belt tactics used by a government lawyer, the Singapore High Court case of a history-making transplant surgeon has exposed an underside of Singapore’s squeaky clean and upright image.

Whichever way the verdict — expected on Wednesday — goes in the case against surgeon Susan Lim, a seemingly straightforward case of a private fee agreement in the city-state has thrown open serious issues of conflict of interest, prejudging by a medical tribunal against a doctor and re-writing rules midway through the disciplinary inquiry process.

The case revolves around fees charged by Lim, who in 1990 became the first doctor to perform a liver transplant in Asia, for services provided by her team of doctors and nurses treating a cancer patient from the Brunei royal family in 2007. The final bill came up to 12.1 million Singapore dollars, 3.3 million Singapore dollars of which was for third-party costs and for other doctors who helped treat the patient.

After the patient, Pangiran Damit, died in August 2007 after six months of treatment and a six-year battle with breast cancer, Brunei’s Health Ministry went to its Singapore counterpart to seek a discount. All the other bills before 2007, amounting to about 14 million Singapore dollars, had been paid without a fuss.

On receiving the request for discount from Brunei, Singapore’s director of medical services, K. Satku, filed a complaint against Lim to the Singapore Medical Council, of which he was the registrar, and sought to begin a disciplinary inquiry into “overcharging by a medical practitioner.”

At the same time, he ordered five raids on the surgeon’s clinic at Gleneagles Hospital. He also told Brunei not to pay Lim.

He thus played three roles at one time — complainant, raider and prosecutor — presenting a conflict of interest that Lim’s lawyers hammered home during a High Court hearing in March.

The case saw another twist when the three panel members of the disciplinary committee stepped down during the first day of a closed-door hearing in July 2010 following accusations that they had pre-judged the case, a first in the history of medicine in Singapore.

The inquiry was suspended, and rules were rewritten to say there was no longer an obligation on the part of the committee to inform the defendant of advice given by the legal assessor to the disciplinary committee regarding the charge.

The Attorney General’s Chambers denied in court that it was done to target Lim, but then it performed an about-face after saying the change did not apply to her case.

The order to start a second inquiry was given. In the face of those actions by a regulatory body, Lim took her case to the High Court to expose what her lawyer deemed “blatantly unlawful actions.”

In the High Court in March, details of the painstaking nature of Lim’s medical services came to light. Pengiran Damit, the queen’s sister, was presented as someone whose demands on Lim and her team were far from ordinary. She had refused to return to Singapore for treatment on one occasion, forcing Lim to set up an intensive care unit and fly it by private jet to Brunei.

Lim was required to be on 24/7 standby for six months. This extended to the time when Lim had undergone eye surgery and was recovering in a hospital bed. Pengiran Damit insisted the doctor be by her side, despite the possibility that Lim could be blinded in one eye if she moved around too much. Lim had to be transported from her own hospital bed to attend to her.

There was also an attempt by government lawyer Alvin Yeo to accuse Lim of marking up the bills of other doctors who had helped her in treating the patient. This was fiercely denied by the doctors involved, who submitted sworn affidavits refuting the accusation immediately.

Suok Kai as its deputy registrar and said he would be taking over K. Saktu’s duties. That post did not previously exist. A provision was made in the law and sanctioned in the Singapore Parliament in January 2010.

All of this has made the case embarrassing for the government, which has already come under attack for a series of missteps that turned into hot-button issues during the recent general elections.

For those in the medical profession and beyond, all eyes will be on the court today.

Goh Seng Heng, medical director of the Aesthetic Medical Partners, said: “This case is very important to all of us in the profession. It has thrown into doubt the way the medical council conducts its inquiry process.”

Another doctor said: “Very seldom do doctors take the medical tribunal to court. Dr. Lim has taken that bold step. We are all waiting to see which way the verdict will go.”

PN Balji is former deputy editor of the Straits Times.

PN Balji's article is a shoddy piece of work and not worthy of any journalistic merits.

Balji does not understand what is conflict of interest.

There is no conflict of interest for the Director of Medical Services (DMS) Professor Saku to initiate the displinary inquiry. He is not part of the disciplinary committee who will decide whether disciplinary action should be taken against Dr Susan Lim. He is therefore not acting as the prosecutor and the judge at the same time.

The roles of a complainant, raider and prosecutors are not conflict of interest roles and Dr Susan Lim will not be prejudiced by Prof Saku complaining, raiding and prosecuting her. He is not the judge of her guilt or otherwise.

Secondly, the fact that members of the first DC stepped down on allegation of pre-judging shows the integrity of members in avoiding allegations of bias on the outcome. There is nothing sinister or unbecoming of this fact.

After spending the last 20 years building two of Singapore’s most successful newspaper start-ups, veteran editor P. N. Balji is turning his attention to professional development as the Director of the new Asia Journalism Fellowship at Nanyang Technological University (NTU).

Mr Balji entered journalism in 1970 when he joined the Straits Times group in Malaysia as a cadet journalist for the Malay Mail. He moved to the group’s New Nation paper in Singapore the following year, rising steadily up the editorial ranks. From 1982 to 1988, he was deputy editor of the The Straits Times, the country’s national daily and the largest English-language paper in Southeast Asia.

However, it was his leadership of underdog titles that sealed his reputation as one of the sharpest news men in the business. He helped Singapore Press Holdings (SPH) launch The New Paper in 1988, serving as the deputy editor of the afternoon tabloid. As its editor from 1991 to 2000, he pushed its circulation up to the 100,000 mark.

In 2000, he embarked on an even riskier project. He joined MediaCorp to help the national broadcaster, enter the newspaper market. As its chief executive officer and editor in chief from 2000 to 2003, Mr Balji achieved with TODAY what no newspaper had done in a century: challenge the formidable Straits Times for a share of the daily morning market, and survive.

Mr Balji will continue his involvement with industry as a consultant to The Jakarta Post and to MediaCorp’s integrated advertising sales arm. His new and diversified portfolio of projects also includes recently becoming a grandfather.

[my note] PN Balji is also the co-host on Channel News Asia's Talking Point (a talk show) (here).
Posted by Helluo Librorum at 7:06 AM

Email ThisBlogThis!Share to TwitterShare to FacebookShare to Pinterest
Labels: Singapore

What is more interesting is the silence of our MSM. I read abt it from BT Online. But I can't find story in ST print version.

Maybe you want to blog on this aspect?

Since I do not read the print media (as a show of disdain), and have not paid attention to MSM's news coverage, I hope someone better informed would document and comment on whether MSM's coverage of Susan Lim has been unduly soft, and whether MSM has chosen to remain silent on the ethical lapses of a prominent member among its ranks.