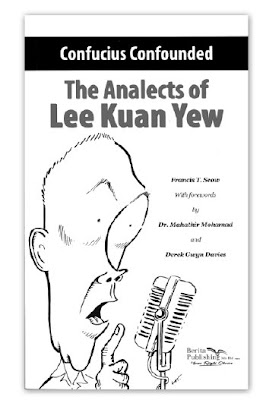 From Confucius Confounded, by Francis Seow:

On Oct 4, 1956, Lee, very presciently, said: "Repression, sir, is a habit that grows. I am told it is like making love -- it is always easier the second time!

"The first time there may be pangs of conscience, a sense of guilt. But once embarked on this course, with constant repetition, you get more and more brazen in the attack.

"First the conscience is disturbed by a sense of guilt. You attack only those whom your Special Branch can definitely say are communists. They have no proof except what X told Z who told Alpha who told Beta who told the Special Branch.

"Then you attack those whom your Special Branch say are actively sympathising with and helping the communists, although they are not communists themselves.

"Then you attack those whom your Special Branch say although they are not communists or fellow travellers, yet, by their intransigent opposition to any collaboration with colonialism, they encourage the spirit of revolt and weaken constituted authority and thereby, according to the Special Branch, they are aiding the communists.

"Then, finally, since you have gone that far, you attack all those who oppose you..."

Posted by Helluo Librorum at 1:34 PM