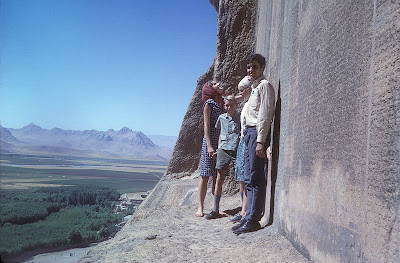 (source)
The Behistun Inscription (photo above) and the more well-known Rosetta Stone played strikingly parallel roles in the decipherment of unknown ancient scripts.

The Behistun Inscription by Darius the Great (reigned 522-486 BC) of the Persian Achaemenid Empire includes three versions of the same text, written in three different cuneiform script languages: Old Persian, Elamite, and Babylonian (a later form of Akkadian).

It played a crucial role in deciphering the Elamite and Babylonian scripts, and thus in the understanding of ancient Mesopotamia.

Likewise the Rosetta Stone records a decree of King Ptolemy V of the Ptolemaic Dynasty in 196 BC in three scripts: Egyptian hieroglyphs, Egyptian demotic, and ancient Greek.

It was instrumental in deciphering the Egyptian scripts, and thus in the understanding of ancient Egypt.

The more obscure (compared with the Rosetta Stone) story of the Behistun Inscription is well told in Empires of the Plain: Henry Rawlinson and the Lost Languages of Babylon by Lesley Adkins.

Posted by Helluo Librorum at 8:12 AM