Can we afford the Singapore generals' toys?

Singapore is now the second most militarized nation, after Israel, in the world.

Despite the vastly improved prospect of continuing peace in Southeast Asia since the early 1980s when China and Vietnam abandoned any ambition of expanding their Communist dystopia, Singapore, while actively forging regional cooperation through ASEAN (Association of Southeast Asian Nations), has remained as militarized as Israel which has been continuously engulfed in wars and conflicts since 1948.

There has been no peace dividends for Singaporeans as a result of the collapse of Communist ideology in China and Vietnam, and the Communist regimes in USSR and Eastern Europe.

Why? Singaporeans have not debated the issue.

Before raising taxes to fund healthcare, education, and social programs, Singapore should examine its defence budget.

By having generals and rear-admirals as prime minister, deputy prime minister, and ministers in the cabinet, the government has developed a groupthink favouring military buildup that is probably wasteful of the nation's resources. Can we afford the generals' toys? 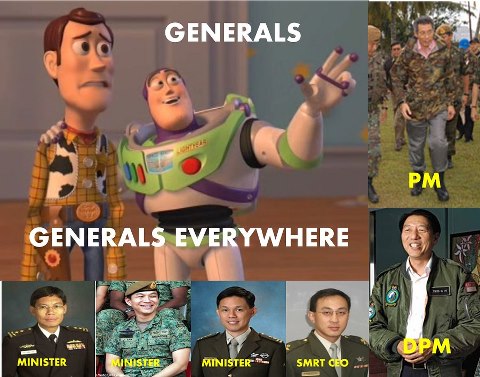 Israel ranked as most militarized nation

Israel tops the list of the world's most militarized nations, according to the latest Global Militarisation Index (here) released by the Bonn International Centre for Conversion (BICC).

Israel's main regional rival, Iran is far behind at number 34. Indeed, every other Near Eastern country, with the exceptions of Yemen (37) and Qatar (43), is more heavily militarized than the Islamic Republic, according to the Index, whose research is funded by the German Federal Ministry for Economic Co-operation and Development.

Singapore ranks second, followed by Syria, Russia, Jordan, and Cyprus, according to the Index, which is based on a number of weighted variables, such as the comparison of a country's military budget with its gross domestic product (GDP), and the%age of the GDP it spends on health care.

Six of the top 10 states, including Israel (1), Syria (4), Jordan (5), Kuwait (7), Bahrain (9), and Saudi Arabia (10) are located in the Middle East, while yet another of Iran's neighbors, Azerbaijan, made its first entry into the militarized elite at number 8.

The former Soviet Caucasian state has used its vast oil wealth, which has placed it among the fastest growing economies in the world, to buy expensive weapons systems in recent years, apparently as leverage to press Armenia (23) into returning the disputed Nagorno-Kharabovsk enclave which Baku lost in a brief but bloody war after the Soviet Union's collapse.

Bahrain's placement in the top 10 was also a first for the Sunni-dominated kingdom which has been backed by Saudi Arabia and the United Arab Emirates (UAE) in an increasingly violent effort to suppress demands by the Shi'ite majority for democratic reform.

While the Middle East is far more militarized than any other region - all of its countries rank within the top 40 - Southeast Asia, led by Singapore, appears ascendant, according to Jan Grebe, the Index's head researcher who directs BICC's work in the field of arms export control.

In addition to Singapore, China (82) and India (71) are increasing their defense budgets at a relatively rapid rate, while the recent flaring of territorial conflicts between Beijing and its neighbors across the South and East China Seas will likely amplify voices within those countries for defense build-ups.

"It remains to be seen how this development will affect the degree of militarization of individual states and the entire region," Grebe said.

In contrast, both sub-Saharan Africa and Latin America are relatively low on the Index, which covers statistics for 2011 and ranked 135 countries altogether.

At number 30, Angola was a notable African exception, while Chile (31), Ecuador (36), and Colombia (38) topped the Latin American list. By contrast, Brazil, which has by far the largest defense budget in the region, ranked 76.

Among those excluded from the Index was North Korea, whose defense budget has proved impervious to independent analysts and which is widely thought to be one of the world's most militarized states, if not the most. Eritrea, another state that has made it into the top 10 in the past, also was not included this year.

Created in 1996, the GMI, which has been updated each year, tries to assess the balance between militarization and human development, particularly related to health.

In addition to BICC's own research, data published by the Stockholm Peace Research Institute (SIPRI), the International Monetary Fund (IMF), the World Health Organization (WHO), and the Institute for Strategic Studies are used to compile the Index, whose rankings go back to 1990 at the end of the Cold War.

In addition to the comparison of military budgets, GDP, and health expenditures, the Index uses several other variables, including the total personnel in the paramilitary and military forces - albeit not the police - and total number of physicians vis-a-vis the overall population, and the ratio of the number of heavy weapons to the total population.

Each variable is given a certain score which is then "weighted" according to a set formula to determine a total quantitative score. The more militarized a country, the higher the score. South Korea which, for many years, ranked in the top 10, fell to 18 this year.

Eritrea, which fought a bitter war with Ethiopia and repeatedly cracked down hard against internal dissent, gained a "perfect" 1,000 score in 2004, the first of a three-year reign atop the list.

But Israel, which has carried out a 45-year occupation of Palestinian lands and Syrian territory, has topped the list for almost all of the last 20 years. On the latest Index, its score came to 877, 70 points ahead of Singapore, which has been number two for every year this century, except for the three in which Eritrea was number one.

Significantly, Greece ranked 14 on the list, the highest of any NATO country, far ahead of its regional rival, Turkey, which took the 24th slot, and Bulgaria (25).

The two countries with the world's largest defense budgets, the United States and China, ranked 29 (591) and 82 (414), respectively.

In addition to the six Middle Eastern states in the top, Oman (11), the UAE (13), Lebanon (17), Iraq (26), and Egypt (28) were all found to be more militarized than Iran, which is currently subject to unprecedented economic sanctions imposed primarily by the West which accuses it of pursuing a nuclear programme that may have military applications.

The concentration of so many Middle Eastern states at the top underscores the degree to which the region has become a powder keg.

If the Middle East dominates the top ranks, sub-Saharan African states, with just a few exceptions, lie at the low end of scale. The region's biggest economy, South Africa, ranks 98, while its most populous nation, Nigeria, stands at 117.

Too little militarization carries its own risks, according to Grebe, because states may not be able to guarantee order or even territorial integrity.

"This situation points to the seemingly paradoxical phenomenon that some state security apparatuses are incapable of preventing violence and conflict simply because the country concerned shows a degree of militarization which is too low," he said.


Instead of nurturing a paranoid fear of Singapore's neighbours, we should nurture compassion for the less fortunate in our midst. 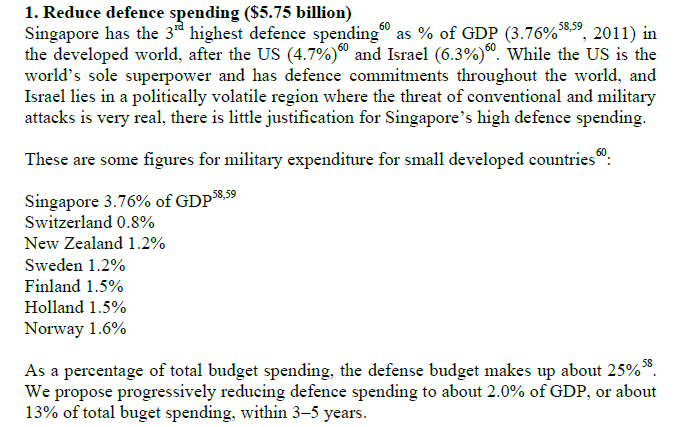