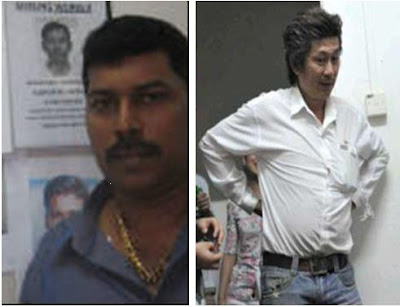 Is your foreign worker giving you problems? Are you afraid that he might be a bad influence on other workers? What if he runs away and you lose your $5000 security deposit*?

For approximately $300 per worker, you can engage the services of a ‘repatriation’ company who will help you deal with the cumbersome task of sending back these trouble makers and allay your fears.

Never mind that you don’t intend to pay this worker his outstanding salary, or that he had suffered an industrial accident at your work place and has not received his work injury compensation. Never mind that he has only worked for a few months for your company and is still trying to pay off the debt he incurred for the chance to work in Singapore.

‘Repatriation companies’ are businesses that are set up specifically to help employers manage ‘troublesome’ foreign workers by roughing them up and sending them back to their home countries forcefully. Many employers are more than happy to pay someone to do this since they find it difficult to handle work place disputes and get rid of foreign workers who do not toe the line.

Paid kidnappers or “service to society”?

‘We are providing a service to society’, claimed Mr Ravi when I met him for the first time.

Mr Ravi is the boss of UTR Services Pte Ltd, one of the more well known repatriation companies. ‘If we don’t provide this service, all these foreign workers will run away and there will be havoc.’

Indians, Bangladeshis, Burmese, Chinese, and Thai,—companies like UTR services have confined and repatriated them all. These guys work round the clock, nabbing workers from dormitories, work sites and even in public places such as coffee shops and outside shopping centers. Typical targets are workers with ‘bad attitudes’, who don’t meet up to employers’ expectations, or whose work permits are going to expire.

The South Asian workers call them ‘Tamil gangsters’: in reality, the people from repatriation companies are burly, rough looking men of all races who are paid to intimidate, assault and coerce workers into returning home.

Employers of course, will not tell workers that they will be sent home in this way. The shock of being repatriated suddenly is a fear many foreign workers have to live with. Once these workers are caught, they are sent to the premises of the repatriation company, locked up in a room and not allowed to leave the premises until the day of their departure. While in the premises, those who protest or refuse to return are routinely assaulted and verbally abused until they agree to go back.

Mind you, the repatriation companies take care to conceal their methods—their assaults do not leave any signs of a visible injury, making any allegation against them for physical abuse hard to prove. On the day of the departure, these workers are escorted to the airport and seen through Immigration. Threats of being blacklisted by the MOM so that they will never be allowed to work in Singapore again are other bullying tactics that are used to intimidate the workers into agreeing to leave.

Mr Xia is a construction worker whose employer called UTR Services because Mr Xia refused to leave until the settlement of these claims. His employer wanted to send him back to China quickly following a dispute He also injured himself while he was at work and he was waiting for his Work Injury Compensation Claim to be processed by the Ministry of Manpower.

What followed was the start of an ordeal that lasted a total of 36 days.

‘They beat me and they took my money’, Mr Xia told me in Mandarin. ‘They said they would only return my money if I agree to return to China. I am very angry—how could my employer do this to me? I am not a criminal. What right do those people have to lock me up, take my money and force me to go home? Why are they so afraid that I would run away? I’m just waiting for my work injury claim to be processed.’

While he was confined in the premises of the repatriation company, Mr Xia told me that he was also slapped and punched. However, he was resolute and refused to be intimidated into going home before he received his money and his work injury compensation.

Running way—a term often used by employers for workers who go missing – is one of the main reasons repatriation companies are in business. Employers stand to lose their deposit of $5000 to the Immigration Authorities if they fail to repatriate their workers. Rather than lose the money, they willingly shell out a couple of hundred dollars to companies like UTR just to make sure that these workers really go home.

Can the police help?

‘You can call the Police for all I care,’ said Francis, the Director of UTR Services, when I was trying to negotiate the release of another foreign worker who was confined. According to Mr Xia, he called the Police 3 times for help during the entire period but his pleas to them went unheeded.

On all three occasions when the Police responded, Mr Xia said that he was told since he was going to be sent home anyway, there was nothing the Police could do to help him. Finally, Mr Xia was given the number of HOME by another worker who was also going to be repatriated.

My colleague, Charanpal, went down to negotiate the release of Mr Xia. UTR only agreed to release the worker after we signed a letter of indemnity stating that we would reimburse the employer of the $5000 security bond should it be forfeited and Mr Xia goes missing.

After his release, Mr Xia made a Police report. The Officer in charge did not seem interested in investigating his complaint. Mr Xia then proceeded to lodge his complaint at the Magistrate’s Court and the Police was ordered to re-investigate.

This time, I accompanied Mr Xia down to the Police station for his statement to be taken. Once again, the police officer seemed uninterested, and even went on to justify the important role that these repatriation companies play in managing foreign workers. He said to me, ‘You have to understand sir, that the employer might lose his $5000 security deposit if this worker goes missing.’ The officer then went on to explain that UTR Services was not doing anything wrong.

An interpretation of the Penal Code might yield a different answer. It states very clearly that, “Whoever wrongfully restrains any person in such a manner as to prevent that person from proceeding beyond certain circumscribing limits, is said “wrongfully to confine” that person.” UTR’s activities are clearly a violation of our laws.

I called the employer and brought up the issue of Mr Xia being confined and assaulted by the repatriation company. The employer retorted defensively that UTR is a licensed company and there was nothing wrong with him engaging their services. A search through ACRA reveals that UTR Services Pte Ltd is a company that provides ‘manpower repatriation and related services.’

What this entails is not described at all. UTR is obviously not just an escort service that ferries workers to the airport. Its methods, which include the wrongful restraint of people are clearly illegal.

There are many things wrong with how foreign workers are treated in this country: the presence and operations of repatriation companies is one of them.

By offering such services, these companies are taking advantage of employers’ fears of losing their $5000 security deposit. By utilising their services, employers are taking shortcuts in handling work place conflicts and industrial disputes. By turning a blind eye to them, the authorities seem to be openly endorsing activities which flout the law. All are complicit in the systemic abuse of the rights of migrant workers. As the recession deepens and more hapless foreign workers get laid off, repatriation companies may soon be doing a roaring business.

The author is a social worker with Humanitarian Organisation for Migration Economics (HOME).

A 19th century page from a 21st century draft by Ng Sook Zhen.
“I hope Singapore government punish them” by Andrew Loh.
The Story of Delowar by Deborah Choo.
Mega Development projects and labour supply chains – who is responsible? by Stephanie Chok.
Sent home with $600 by Deborah Choo.
———
Posted by Helluo Librorum at 3:29 PM