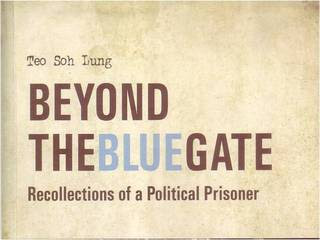 In 1987, even highlighting the plight of the poor in Singapore could land you, and did land twenty-two social workers and activists, in jail without trial. What a despicable act of a thoroughly despicable power elite.

Beyond the Blue Gate: Recollections of a political prisoner  is a new memoir by Teo Soh Lung, detained under Operation Spectrum in May 1987 for an alleged Marxist plot to overthrow the Singapore government by force. How mindless and gullible the government must have believed the people to be.

Read about the book launch here. Let's see if court proceedings against Teo, as against Alan Shadrake, to intimidate dissenters and suppress the truth, would ensue.

Lawyer Teo Soh Lung’s memoir of her 21 May 1987 arrest and framing by the Singapore authorities as part of the so-called ‘Marxist Conspiracy’ is a remarkable document. Not only does it show how a person of courage and integrity can speak truth to power, but it also illustrates how that power corrupts and destroys the souls of those who wield it unscrupulously. One day a Singaporean Truth and Reconciliation Commission will determine the truth of the PAP years. Until this happens, this memoir will serve as an essential benchmark.


and historian of Southeast Asia


Teo Soh Lung’s book should be read by all people who are interested in democracy and the rule of law. Not only is it a poignant personal account of official ill treatment, but it is a brilliant testimony to the cruelty of authoritarianism, even, indeed especially -- when it comes in the guise of legal due process. This is perhaps the most shocking aspect of her story: the abuse of the law in a republic which is democratic in theory, but sacrifices its most democratic citizens to the whims of the rulers.


Ian Buruma is among the top 100 global thinkers of 2010 as selected by the Foreign Policy magazine  (source), an intellectual, and a great scholar.

Posted by Helluo Librorum at 6:18 PM